Kitting Out A Brand New Jeep

"Hi John, you want to do lunch?” Talk about timing. Luke Hawkins’ call came right after I’d polished off the bowl of cardboard for breakfast dished out as part of a new ‘lose weight’ regime. I would have said yes to a pie cart meet, but lunch with Luke is always a pleasure. A second generation car dealer and dealer principal of the Westpoint Group, Luke’s the sort of bloke an old journo can learn plenty from.

Anyway, he chooses upmarket pubs a few cuts above the tiled walls I’m usually seen in.

After a beer and a laugh, Luke said: “Johno, have you seen any of the guff on social media about Jeeps lately?” 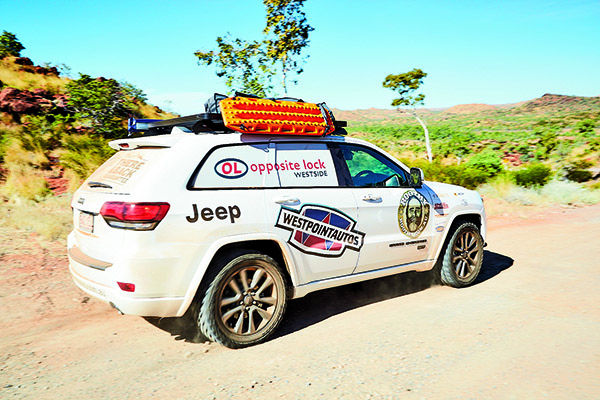 “You mean complaints? Yes, I’ve seen ’em,” I replied. “But it’s sort of par for the course, isn’t it? Sort of a mix of tall poppy syndrome and knocking things you don’t understand.”

And that’s sort of true, but not the whole story as I was about to find out. For a while, Jeeps were selling like crazy – a combination of great advertising, great pricing and a bloody good product. But somewhere up the line a few years ago, things got a bit too self-confident and suddenly customer and warranty issues weren’t always coming first. Sometimes success breeds complacency.

And there’s nothing like a few disgruntled customers to make a lot of noise. None of this was Luke’s immediate problem; Westpoint’s growth has been based on customer satisfaction, but one of its franchises sells Jeeps and noticed a big drop in sales. There’d been some major changes at distributor level to correct the complacency issues, including a new ‘there and back’ guarantee aimed directly at the knockers but, on the sales floor, things needed a shake-up. And the Hawkins family has gone a long way based on their ability to make things happen.

“What I want to do is lend you a new Jeep, you head bush and work it as hard as you want,” Luke said. “We’ve got complete confidence the product will survive some Roothless testing. What do you reckon?”

I reckoned I already have a truck. Actually, I already have several trucks; all old and smelly maybe but, hey, look who’s talking? I like my old trucks, too; nice and simple, like me. Maybe even a tad overweight and inclined to consume more fuel, like me again. But I did have a filming trip coming up and that meant room for a camera car.

Now, I don’t want to be mean to our camera teams but the fact of the matter is, when your brain is overflowing with ‘what’s charging where?’ and ‘what’s the next shot?’ and ‘how do I get the mud out of that?’, things can get pretty hectic for the driver. Camera cars need to be reliable, strong and powerful enough to catch up. They also have to go almost anywhere and, err, take a beating from blokes who know they’ll be giving them back. They have to sit behind the convoy in the dust all day until they get bounced off the road for another transition shot. The ideal camera car would be an M1 Abrams tank.

So I ran all this past Luke and he offered up a brand-new Jeep Grand Cherokee. I must have paled a bit because the next thing he said was to take it to Aaron at Opposite Lock Westside and get it decked out to do the job.

Aaron’s young and enthusiastic but, boy, he knows his stuff! Between us, we came up with a ‘nothing but the best’ approach to getting the Cherokee sorted to do the job. Being a brand-new model, there wasn’t anything available and proven suspension-wise – one of my big concerns was the ground clearance, so another 40 or 50mm would have been nice – but I reckon we nailed the rest of it really well.

Next month I’ll tell you how it worked! For now, let’s take a look at how an old bushy with a fair bit of offroad experience and a young bloke who knows his products came together to come up with the right clobber.

First off was the battery pack. When Aaron told me he’d like to use a Phoenix inverter, I was over the moon. For those of you old enough to remember, I built a caravan using the ‘nothing but the best’ philosophy years ago and Bainbridge supplied one of its Victron Phoenix inverters because we needed pure and reliable 240V power in Vicki too. The van was used as a base for camera teams, when the wife wasn’t plugging in her hairdryer, anyway. With dual Swedish CTEK 20A chargers feeding two 120Ah lead crystal batteries to power the Victron, we had the perfect combination.

I’d asked Aaron to go for a Front Runner roof rack, having tested them so extensively in the Kalahari, and while he was sourcing that, he came up with the idea to fit the batteries into a Front Runner Wolf Pack storage box with the CTEKs mounted on the lid and power outlets recessed into the protected sides. It was a stroke of brilliance, combining strength and protection with the ability to be transferred to another vehicle if required.

We looked the Cherokee over long and hard. Because it couldn’t be lifted, Aaron sourced a steel front panel from UNEEK 4x4 and then, after asking me what sort of winch was best, he got his team to fit a VRS 9500lb job with rope. A bit of bash plate style protection up front on modern vehicles is almost mandatory if you’re serious about going bush, and the beaut thing about going through Opposite Lock is you get the choice of every product available on the market. In the old days, we got away without it thanks to steel bumpers and big spaces between simple components. These days, anything from a roo to a rock can see your holiday plans sitting on the side of the road in a cloud of steam if you’re not prepared.

Tyres were next. Stock tyres are great for making vehicles sound good during test drives but punctures and side wall failures are the number one breakdown in the outback. Lately, I’ve been proving that strong tyres do not necessarily come with big brand names and bigger prices. I’d mentioned that to Aaron and predictably he came up with a brand I’d never heard of. Visual inspection showed the Achilles Desert Hawks to be round, black, kind of chunky and with a hole in the middle – pretty much what you’d expect from a top shelf offroad tyre. At around $300 each in that weird 18in size, I was pretty impressed!

Would they do the job? I figured I’d find out soon enough, but it only took eyes to see how much tougher they had to be over standard rubber. At least I knew the Opposite Lock awning would do the job. I’ve tested these over the years and can’t fault them long-term, a stage a lot of the cheaper awnings never get to.

Last but not least, I asked Aaron to fit some mounts to the roof rack to take a set of MaxTrax recovery tracks. Look, leaving home without MaxTrax is stupid. I’ve had plenty of trips where the MaxTrax never left the roof but, fact is, when they do, they’ve recovered the vehicle and often saved it, too. Maxies are the cheapest insurance any offroader can have. Front Runner is a South African based company but it’s telling that it makes a bracket for its racks specifically for MaxTrax because the orange boards are a favourite over there, too. I guess you don’t want to be mucking around with cheap cracking plastic when there’s a pride of lions waking up under those trees.

Righto… So with swags and bunks strapped up top, the back seat folded to take endless Pelican cases and Milo smoking away up front, we left Brisbane heading for Darwin via a whole bunch of outback tracks. How did we go?

Next month… same time… same channel. With a 3500kg towing capacity, I reckon a few of you might be pretty keen to find out how these Jeeps go in the real world, eh? That’s the real world of Roothless outback punishment and huge distances.