Sure, you can opt for flash and pizzazz but if you're after an honest, comfortable camper with little to no set-up time, the Quest RV Rubicon could be for you. A straightforward configuration frees the camper of complicated opening mechanisms, while underneath she's decked front to back in armour providing reassurance out on the tracks.

The Rubicon QT from Quest RV is perhaps the most laser-focused hybrid amongst the field at CTOTY 2018. It’s not a hard-core offroader, nor does it sleep your 40 kids. What it will do though is give simple and quick two-up touring where you don’t have to turn around if the tracks turn pear-shaped. With that in mind, the self-sufficiency has been designed to suit. 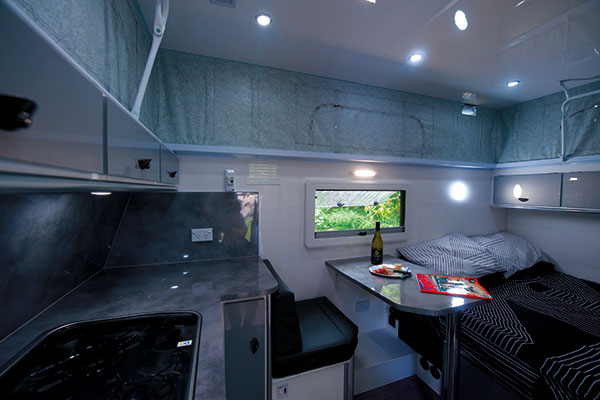 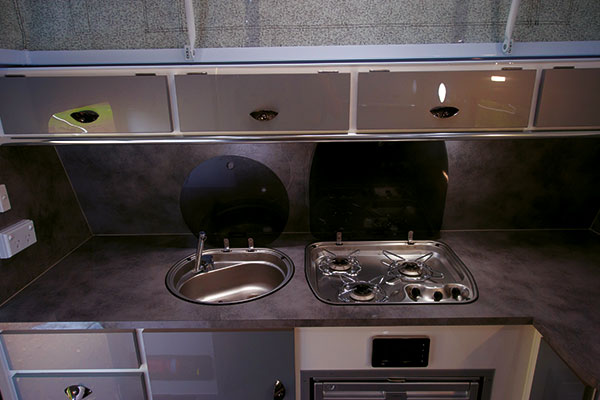 Starting from the lifeblood of, well, life, the Rubicon QT sports 160L of water split between two 60L tanks underneath, and twin 20L jerry cans up front. There’s no fancy external draw setup, but the jerry cans will allow you to keep things topped up between stops.

On the electrical front, there’s a BMPRO battery management doing the thinking for you. It keeps a close eye on the twin 100Ah AGM batteries (which are easily accessed on a slide-out system), and when they start running low can draw external power from the 150W solar power system. Check your gas levels once a decade or so and you’ll never run out, too, there’s twin 9kg gas bottles up front which keep the hot water on, and the heater running on cold nights. The Rubicon QT isn’t the camper you’d buy for 6 months in the Simmo with the kids, but for extended touring where you can park up for a week at a time, it has more than enough dog for the fight.

I've said before: out on the tracks, I'm a simple man, reluctant to punt weights through mud and sand and easily frustrated by complicated setups at camp.

From the ground up, the rugged, straightforward Quest RV Rubicon QT is meant for business. She’s built on a tough chassis that will handle the stresses of long-range and offroad touring. The standard chassis is Duragal with coated welds, however, I’d personally opt up to the greater protection of the hot-dipped galvanised. It rides on the popular AL-KO Enduro fully independent trailing arm suspension with heavy-duty shock absorbers, Australian-made 4WD coil springs, maintenance free bushes, 12in electric brakes with attractive alloy mags and 15in all-terrain tyres. Out front is the 3.5-tonne AL-KO offroad coupling on the point of the 150x50mm A-frame drawbar. Underneath, there’s checkerplated armour covering almost the entire underside including the twin 60L water tanks to the front and rear. This steed has very good ground clearance combined with defined relief angle at the rear making it almost go-anywhere vehicle.

With a tare of only 1300kg, the Quest RV Rubicon QT's weight is comparable to many forward and rear-fold campers, and it isn’t any taller than most loaded 4WDs.

The overall length is 5.5 metres, which isn’t too bad even for tough offroad environments.

Hybrids bridge that gap between camper trailers and caravans, with some falling closer to one than the other, with external living options leaning towards a camper. That’s where the Quest RV Rubicon QT falls, and occupies its position with surprising aplomb and would be ideally suited for couples looking for a mid-range hybrid that is well equipped and presented.

The Rubicon almost looks like a small caravan casually parked on the side of the road, but look closer and its AL-KO trailing arm suspension and hitch, its outside barbecue, heavily shrouded sturdy chassis, well set-up electrical fitout and light Tare weight of 1300kg mark it down as something more.

And those who love the offroad life would do themselves a great disfavour to dismiss the Rubicon. It has a neat but unprepossessing initial impression but step inside, crawl underneath and open a few doors and you’ll start to accumulate a somewhat more serious notion of what this camper could do for you.

At 5500mm long and 2300mm in height, it would fit easily around most tight bends and through narrow gaps between trees and would be easily manoeuvred around. With a load capacity of 500kg and an ATM of 1800kg to go with its modest 1300kg Tare, it would be easily handled by any mid-sized 4WD and most softroaders.

At $49,990, it sits below the heavy hitting market leaders but above most of the lower priced imports, and as an all-Australian production it should answer for many.

Although one of the most simple campers on display in the hybrid category of CTOTY, the judges unanimously agreed the Rubicon QT was extremely comfortable. Now, this extends beyond simply a list of specs and inclusions to the general sense of camper; how easy it is to get around, whether things fall to hand where you need them and the mood of comfort inside a camper. The Rubicon QT please us immensely on all fronts.

A hybrid that sways a little towards the caravan side of the market, the Rubicon QT has little outdoor living facilities beyond a drop-down side hatch bench and a BBQ beneath a roll-out style awning. There is no external kitchen, sink or fridge, which is why it seems like a small offroad caravan to me – although there was disparity amongst we judges as to what exactly defines a hybrid. Whatever the case, the Rubicon QT’s lightweight, genuinely offroad attitude is paired wonderfully with a quick and easy pop-top set-up and a very comfortable interior. Although not huge, the interior layout is well-designed ergonomically with plenty of head height, a compact but functional kitchen and an internal bathroom. The dinette utilises the edge of the queen innerspring mattress as one of the two seats, saving much-needed space, and storage is plentiful. For a camper of limited dimensions, the Rubicon QT never feels cramped nor lacking, and as such is very comfortable indeed. This is the hybrid in its pure sense: simple, easy to use and go-anywhere.

Wheel/tyre 15in all-terrain and 15in Aluminium mag