In recent years, we’ve lost sight of what the term ‘value’ actually means. With so many flashy ads screaming for our attention and all vying for that coveted PayPass wave, it’s become a flurry of bargain-basement offerings. A race to the bottom, where a $20 hammer that lasts two swings is better than a $1000 hammer that’ll last 10,000. Pioneer’s new Mitchell is one of a new breed of Australian manufactured campers aiming to not only change our definition of value, but potentially change how we look at the humble camper trailer itself.

Price is what you pay. Value is what you receive. So what is it about the Mitchell that can fundamentally challenge our ideas of a camper trailer? After all, it’s hardly the first hybrid camper on the market and, at $69,800 on the road (inc. options), this offering is hardly cheap.

Where the Mitchell differs from traditional campers is that it’s always ready to go if you are. Not only can you keep the fridge loaded up and the battery on charge, but it’s a true go-anywhere, anytime sort of offering that doesn’t require an elaborate driveway setup just to load it. If it takes you the better part of a month of preparation on your camper to get ready for a weekend away, or you spend half the first day fighting an endless hoard of awning poles and ill-fitting guy ropes are you really getting value for not only your money, but your time as well? Pioneer doesn’t think so, and it’s gone out of its way to do something about it. 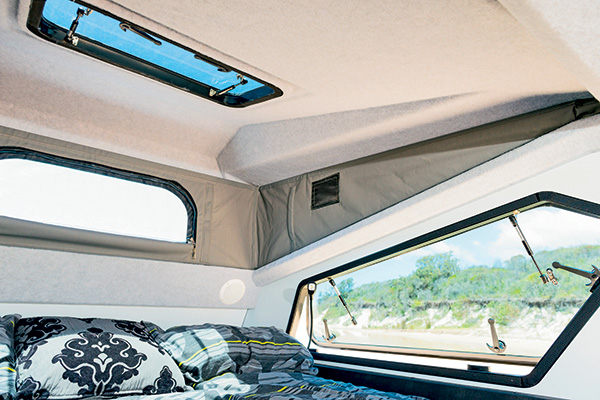 At first glance, it’s easy to mistake the Mitchell for other long-running campers, but this doesn’t last longer than the first glance. It’s obvious from the outset that Pioneer has designed the Mitchell to not only offer more space than you’d typically find in this style of camper, but to offer it in a way that’s both easily accessible and quick to set up. The body is an impressive amalgamation of aluminium, zinc anneal, and fibreglass that somehow makes for a camper that’s not only strong, but lightweight and extensively insulated. It wears Pioneer’s signature black and grey paint scheme with red highlights throughout but what is really noticeable is the fit and finish from towball to taillights. Everything just feels good. It’s hard to describe in words but it’s the little details you notice with a quality camper like this. Panels are straight with zero distortion, coatings are smooth, even and thick. Hinges are robust and swing smoothly while locks engage firmly giving confidence in the seals. It’s something that can’t be listed on a spec sheet yet so many still get wrong.

That mentality has been extended throughout as well with extraordinary attention spent on seemingly minor details. For starters, the mattress is an honest queen-size innerspring that’ll take ordinary bed sheeting. It’s set on a swing-up bed frame and supported by timber slats to promote airflow underneath for cooler nights in hot climates. Both sides of the bed are flanked by soft-touch leatherette panels below the wide opening windows. In short, it’s a bloody nice place to be.

The big selling point, and the one that makes this a true all-weather, all year-round camper is the Aircommand reverse-cycle air-conditioner. The unit itself is tucked under the bed so does eat into storage space and requires a generator or mains power hook-up to work, but it really makes the Mitchell stand out from the crowd.

The air-conditioning was hardly the Mitchell’s only trick, though. Back outside under the awning, which extends the length of the setup in its full form (the quick awning is shown here), the kitchen is a design like no other. It’s a stainless offering like you’d expect but comes out in two pieces. The main preparation area and sink make up the bulk of the kitchen, but the top section with twin burner gas stove swivels around against the camper’s body to create a huge kitchen space that would rival literally anything on the market. The Mitchell is off to a flying start.

The Mitchell doesn’t disappoint when it comes to storage options. Starting from the front the stone deflector doubles as a storage box for three 20L jerry cans with twin 9kg gas bottle holders on either side. Both gas bottles are easily accessed with a flip forward panel preventing the old ‘hoist the gas bottle an extra foot in the air just to get it into the holder’ trick. Behind that there’s a huge 700L storage box with a fridge slide on the passenger’s side that’ll take most popular sizes of fridge with plenty of space left on the opposite side for storage of bulky items.

Directly above the fridge box is a top box offering up another 340L of storage. Like the main body, it’s swept back to improve fuel efficiency and makes the perfect storage spot for floor matting or bulky items like chainsaws if you want to quarantine them from your food. Behind the fridge box there’s a large pantry with twin drawers to store both large and small items within reach of the kitchen. They’re accessible without opening the trailer up so can be left full of long-life items and topped up en-route to the destination, another little trick that makes the Mitchell significantly easier to head bush with than some competitors.

Underneath the bed there’s an additional 580L of storage. The downside is fitting of some accessories can eat into that space. The good side is it’s easily accessible with Pioneer’s door in a door system that lets you access the space without lifting the main hatch.

If storage space is key for your camper trailer purchase the Mitchell has a lot going for it. On the practicality front, it’s just as convincing. The kitchen is well laid out with hot water directly at the tap, gas plumbing throughout and plenty of storage options. There’s an included gas hot water shower that tucks into its own neat holder on the driver’s side. Setup times are miniscule as well with Pioneer’s quick shade style awning taking just minutes, something the main body of the trailer boasts as well. The one downside to the speed (there’s always a downside) is the floor pan isn’t as large as some may require. If your mornings are filled with yelling at miniature versions of yourself to get dressed and put their dirty clothes in the laundry, you’ll want to tick the box for the optional kid’s room as well. While the hatch does open into a hard-floor area, filling it with stretchers isn’t an appealing prospect.

All the bells and whistles in the world aren’t worth a French wazoo if the whole thing comes crumbling to the ground at the first sight of the dreaded corrugations. So how does the Mitchell fare offroad?

On that front it’s got a few tricks up its sleeve. It’s incredibly light, not even for how equipped it is, just in general. Despite having a GTM of 2000kg its Tare is just 1330kg, that not only means there’s plenty of room on the scales to load it up with gear, but also makes for an easier to tow trailer that’s less likely to act as an anchor as soon as the going gets tough. While the Mitchell is hardly diminutive in size it carries its bulk well. From the front box right through to the rear hatch it’s been aerodynamically profiled to help keep fuel consumption figures respectable for the long haul, a welcome addition in the hybrid category. It’s also relatively narrow at 1950mm which should keep it inside the profile of larger 4WDs like the LC200.

In heavily treed or winding terrain the Mitchell’s slimline body is a definite plus with very few dangly bits waiting to be ripped off by stray branches and, despite its 5300mm overall length, it does have a modest rear overhang and aggressively profiled departure angle, both of which will help when negotiating tight turns and steep terrain, although its ramp over angle may see the chassis scrape from time to time.

The Mitchell is aimed squarely at adventurous couples doing serious miles, and on that front it’s not going to disappoint. It offers an incredibly quick setup with a spacious pop-top, various means of keeping cool and insulated walls to keep you warm. It can bunker down with the roof down and the TV or book lights on when storms roll through or open right up to enjoy pristine beach weather, and it can chop and change between both setups faster than you can establish most hardfloor campers without even looking at their awnings. There’s an abundance of storage options that will suit a large range of gear as well, so you’re not stacking your firewood in your panty, or your extra bread in the jerry can holder, and it’s all easily accessible without opening the trailer up.

There’s no concerns about the longevity of the trailer either. Underneath the chassis is 100x50x3mm from drawbar right through to the suspension mounts and fully hot-dip-galvanised from front to back. It provides a significantly stronger protection than spray on treatments some manufacturers offer.

The weight it does carry is kept down low for a low centre of gravity, the result of which is a stable and predictable tow, especially in off-camber situations. The wheel and tyre combo is just as stout as any 4WD tow rig too with CSA alloy wheels and BF Goodrich KO2 all-terrain tyres helping achieve plenty of ground clearance front to back. In fact the only let down, and this is nit-picking mind you, is the suspension. It’s an independent setup used throughout its model range and has a proven track record with a 2000kg rating, but at this end of the market it’d be great to see Pioneer come to the market with something tougher.

Pioneer is hardly a newcomer to the offroad camper market so it’s not surprising that their first foray into this market would be a successful one. The Mitchell (and it’s lower-spec cousins) are not only incredibly well equipped they’re constructed to a standard that easily puts them with the best of the best in any market they’d enter. It’s hard to hide the DNA it shares with other Pioneer campers but that should serve to reassure customers they’re not laying down significant amounts of cash for something untested. It’s the logical evolution of their product line.

So who does it actually suit? If you were heading off to spend the next 12 months on the road with a troop of kids in tow sneering down your red-dirt covered nose and townies in their weekend campers this might not be the pick for you. If you’re an adventurous couple after a camper that will take on 90 per cent of the tracks in the country the Pioneer Mitchell could just be your next home on wheels.