The observation ‘you can’t put an old head on young shoulders’ often stands as a truism. Experience makes the difference in many walks of life.

And this hackneyed phrase has been pivotal to the genesis of the WA-based Camprite Campers’ TX6 MKII.

Camprite patriarch Reg Harwood has learned invaluable lessons during the past two decades which are now shaping his latest camper trailer offering. 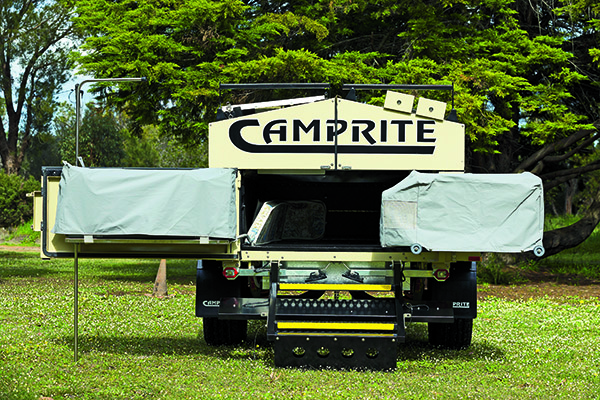 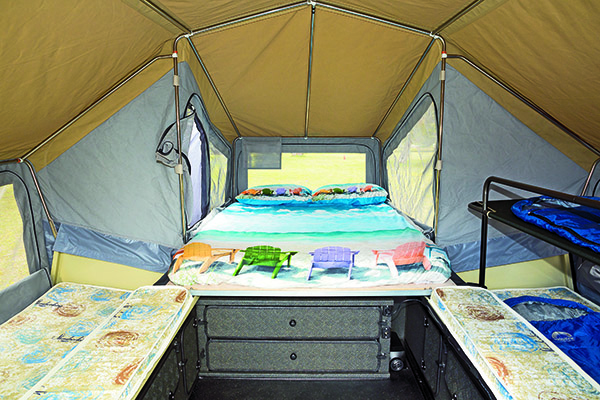 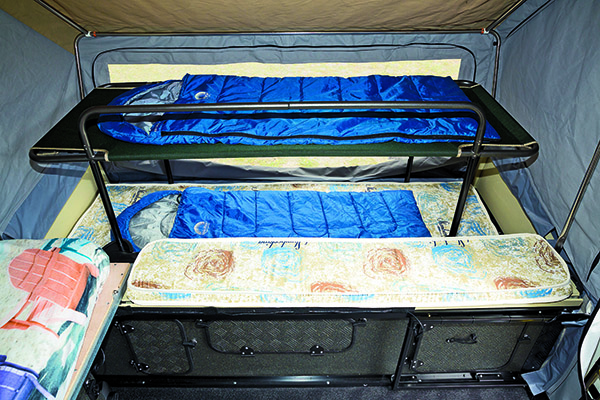 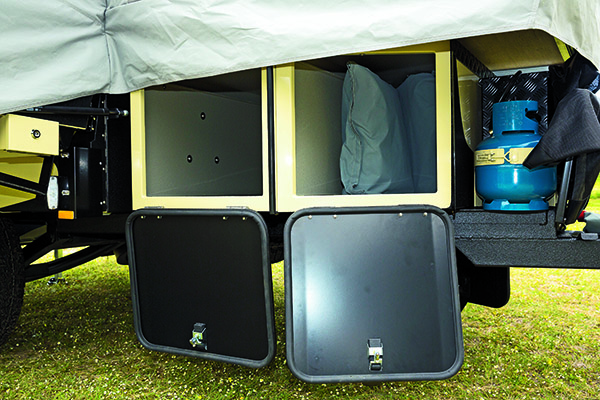 Harwood is a father of five and, after camping in tents then a self-built soft-top camper, he decided he needed more room for the kids. That was the catalyst for Harwood to design and build the first Camprite camper in 1995 and, although the camper trailers have dramatically changed since then, the iconic layout has remained much the same – a raised three-bed hardfloor tent containing two single beds and a main bed, with an external kitchen out the front.

Camprite has definitely emphasised the ‘KISS’ principle in the camper’s simplicity of set up. Patience is not a virtue of mine, so you’ll understand my delight when I realised the TX6 MKII could be set up in the twinkling of an eye. In reality, it takes two people less than two minutes to set it all up.

It starts by simply flipping out the folding single beds, stepping inside and pushing forward the main bed. Nothing requires adjustment, including poles, with the internal setup procedure. The camper has 10 clip-in bars – three for the roof which hold up the two main pivoting frames; two for each single bed; and three for the double bed. And the tent canvas, with 8oz sides and 11oz roof, is Oz-made (Textile Wax Converters).

Setting up the awning (3000x3500mm) is also a simple operation; it’s easily reached from its starting point, and all you have to do is step onto the rear step to access its higher point. Not only does it render a ladder obsolete, there is only one spreader bar for the entire awning. Quite simply, it’s attached in a jiffy.

And I want to rave about the interior sleeping configuration – side-folding single beds and a slide-out main bed, all with Slumberking mattresses. The camper also carries stretcher beds, which can be stored on the single beds, and conveniently, the bedding can be left made up. Additionally, there are two slide-out drawers under the main bed plus USB ports and storage underneath the single beds.

In terms of internal upgrades for MKII, you’ll find four new USB ports, 304-grade stainless internal bar work (replacing the galvanised), and internal access to an optional shower from the main bed. A contemporary, vibrant internal colour scheme has also been introduced: black fleck to all cupboards and drawers.

The TX6 MKII is dubbed by Camprite as “the ultimate offroad family camper”. I certainly can envisage my wife and two teenage sons taking off for rugged destinations such as the Canning Stock Route, Simpson Desert or Cape York in this ultra-tough and extremely comfortable camper trailer.

It ticks a myriad of boxes for me, and high on my appraisal sheet is the intelligent and workable design of both the slide-out kitchen and slide-out fridge-freezer, which angle to the left and right respectively when they swing out from the rear. There is also easy access to the kitchen when the camper is closed.

The kitchen comprises a pantry with a cutlery basket attached to the kitchen lid, which is ideal for holding chopping boards, plates and tongs and so on. And I’m a huge wrap for the wider swing-out extension table, which runs past the awning and is now big enough for Weber Q. An obvious advantage of the table’s length is there is no smoke build-up underneath the awning when cooking.

Meanwhile, the 85L EvaKool slide-out fridge/freezer is big enough to hold a carton of the beverage of choice plus around 75kg of rations. That’s enough sustenance for a family of four to last for two weeks out in the sticks!

The comfort stakes are lifted even higher courtesy of the optional shower and toilet facilities out the back, which have undergone significant changes in the MKII release. These now include a new aluminium shower floor and a shower tent made from waterproof nylon. Obviously there’s no showering on dirt/sand, and the shower is accessible from inside the camper so you can undress in absolute privacy.

The shower has external steps for use during the day and also mounts onto the camper’s exterior, thus it doesn’t take up any extra storage. It simply folds down after unclipping two stainless steel over-centre latches and is self-supporting.

We also see room for a large Thetford 365 porta-potti housed in a hatch, which slides out over the shower base. It serves a dual function, in that it can be used during the day from within the shower tent and it’s also portable, which is so convenient when nature calls for the kids at night.

And the hits keep on coming for the TX6 MKII.

Okay, $57,170 for the TX6 MKII as tested is pretty serious coin for a camper trailer – as is its base price of $45,300 – but it’s pretty much got the whole kit and caboodle and you really do get what you pay for. You’re getting the best of both worlds – comfort and a fair dollop of luxury along with a toughness that guarantees peace of mind when tackling our wild frontiers.