There’s no doubt about it, Cub Campers is one of the most trusted names in the camping world. The manufacturer has built more camper trailers than most teenagers have popped pimples and, more importantly, they’ve done it right here, in Sydney, Australia. I’m not talking about just being assembled here either, these little beauties are built right here from scratch, using Aussie BlueScope Steel, Wax Converters canvas and good old blood, sweat and tears, along with some of the most advanced machinery and technology in the industry. So, when you combine all of the above with a product that’s been evolving, improving and impressing for years, you know you’re on to something special.

With all that in mind, I took a closer look at what makes the all-new Cub Kamparoo Brumby tick.

Cub Campers has a whole swag of different camper trailer models to choose from – some are soft roaders, others are made for dirt roads and some have full-blown adventure flowing through their veins or, should I say, chassis? Either way, it’s not Cub’s style to build one model of camper trailer to be mediocre at everything. Nope, when Cub sets out to build an affordable yet ultra-capable offroad adventure machine, that’s exactly what you get! 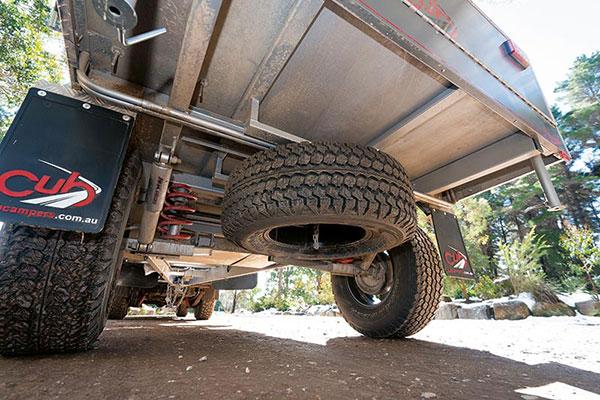 Most people choose a hardfloor camper trailer for the simplicity they offer when it comes to the setup side of things. So, how long does it take to set the Brumby up for a quick overnighter? About four minutes if you’re anything like me and get caught in dead-set torrential rain! Not bad for my first attempt, eh? The struts are adjusted perfectly, and there’s plenty of room to stuff the canvas back inside when you’re packing up.

When it comes to setting up the awning, like most campers, there’s a little more effort involved. Once again, there’s a sequence to follow that makes things run nice and smoothly, but you’ll still have a fair few poles to set up each with their own butterfly nuts to screw on the end, which can be a bit fiddly if you’re in a hurry.

One part that gets a big tick from me is the awning’s roof poles are actually initially attached to the main tent by hook and fastener tabs, which makes it super simple to position the poles compared to a lot of other camper trailers out there. Plus, once the awning is up, it’s quite a solid design that gives you a fair bit of confidence when the weather is looking a bit, ‘how’s your father?’

Having the right electrical gadgets and gizmos in a camper trailer can mean the difference between making the camper super comfortable or just plain old unreliable.

In my opinion, Cub has pretty much hit the nail on the head with the electrical side of things. Things are kept it simple without sacrificing reliability – who says you can’t have your cake and eat it, too? To power up the accessories, Cub supplies one deep-cycle battery with a Projector battery charger, two internal 12V outlets and three external 12V outlets. It’s also wired for 240V mains power with two double powerpoints mounted internally and one single point mounted externally. There’s also an LED light and 12V water pump with faucet. The overall system is very neat, well finished off and just oozes value reliable power at the flick of a switch.

Love to cook up a good feed?  Well, the Brumby’s cooking quarters have just been upgraded! The kitchen is basically a full stainless steel slide-out unit these days and, to be totally honest, the quality is impressive. The slide-out runners offer a nice, solid and dependable sort of feel compared to some of the others on the market and, when it comes to functionality, it’s got it in spades. Obviously, plenty of thought has been put into the kitchen’s overall design, with things like storage and bench space being the main improvement on past models. You’ll find the three storage drawers are the perfect size for the majority of camp cooking utensils and, for the slightly larger items, there are two storage tubs built into the kitchen’s top as well. Bench space is plentiful, but if you’re anything like me and cook a gazillion meals at once, there’s also a wide and sturdy shelf that clips on for extra space, and stores away neatly with the kitchen unit.

Most hardfloor campers really struggle with the storage side of things, so the Brumby has had a bit of a front storage box overhaul. It’s actually a completely new storage box with the option of having two internal aluminium storage drawers on the driver’s side. In truth, it doesn’t exactly mean you have mountains of extra storage space, but it’s definitely an improvement from previous models. The only real objection I have is that you can’t access the under-bed storage tub if the camper isn’t opened up, but other than that the storage is all pretty accessible.

One thing I really liked was that the tent storage pipe is at the perfect height – I know it’s only a little thing, but it’s the little things that count right?

So, how would I describe the all new Cub Kamparoo Brumby? Well, put it this way – I’d own one in a heartbeat! Let’s face it; they’re not the cheapest option out there, but they’re hard to beat in value for money.

The build quality is pretty darn impressive, they’re about as tough and capable as Muhammad Ali in his prime and they’ll provide truckloads of comfort, day-in and day-out.

So if you’re after reliability, comfort, capability and value for money, the Cub Kamparoo Brumby could be right up your alley!