The Cherokee nameplate is a significant one in the 4WD world. One of the first monocoque 4WDs produced, and with a sophisticated part-time/full-time 4WD system, the 1984 XJ series was produced for 17 years. In 2001, the KJ arrived then, in 2010, the KK was released. Then, in 2014, the new KL series arrived. But is it worthy of the Cherokee badge? 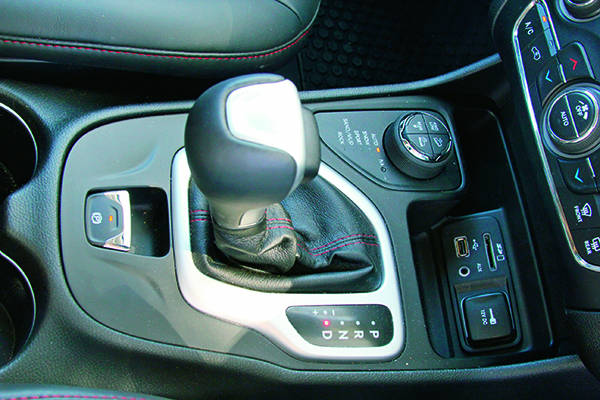 The Cherokee’s cabin is very comfortable and provides ample space for four adults or five at a pinch.

The 3.2L version of the Pentastar V6 has been used for the first time with the KL Cherokee.

The nine-speed automatic transmission is a first for the medium SUV segment and Jeep claims that more than 40 individual shift maps for specific conditions optimise shift quality and shift points to maximise fuel economy, performance and drivability.

The transmission’s software chooses the right shift sequence based on engine torque, kick-down events, longitudinal and lateral acceleration and grade changes. The shifts also depend on temperature, speed and electronic stability control being activated.

The Trailhawk has dual-range transfer plus a locking rear differential for offroad work. The locking rear diff can be activated in any low-range terrain mode, but will lock automatically when in certain modes, such as ‘Rock’, to maximise traction.

The Trailhawk’s suspension blots out the worst road ripples and, while its steering is well-weighted, it doesn’t communicate a lot of what’s going on up front. This vehicle is a transverse, front-wheel drive by default, and that’s how it translates in its chassis dynamics. It’s not the sharpest, most dynamic vehicle out there by any stretch.

Tow-testing relies on a number of factors and, sometimes, it can be hard to achieve them all, so in this case we towed less weight than we would have liked. So it was no surprise that the Cherokee hardly noticed the weight behind it, and felt stable.

Where we can adjust for less weight, though, is in finding steep climbs to ascend and descend, and also push a bit harder in acceleration during the photography sessions, where we may need to drive up and down the same road several times. In this scenario, the Cherokee still performed well, climbing the hills with minimal fuss and with acceptable engine braking down the hills.

The only notable change in performance was how easily the front wheels chirped off the mark with a caravan behind – clearly the result of the on-demand 4WD system. It’s also worth noting that, with its 60L fuel tank, the comfortable touring range when towing is only around 250km – which is clearly not ideal.

The Cherokee is a stunning-looking vehicle – you’ll either love or hate it – and it is good to see that Jeep has not completely given in to fashion and has kept with a proper 4WD system in the Trailhawk.

Yet the high level of engineering and quality (not to mention great pricing) that has seen its sibling, the Grand Cherokee, sell so well, doesn’t apply here. The Trailhawk lacks the cohesive quality and dynamics of the Grand Cherokee, and also of the key competitors in the medium SUV class.

Check out the full review in issue #532 Decemeber 2014 of Caravan World magazine. Subscribe today for all the latest camper trailer news, reviews and travel inspiration.