Australian Off Road (AOR) founder Steve Budden designed his first Quantum ‘Super Camper’ in late 2007, he soon realised he had gone a step too far for some of his loyal hardfloor camper customers.

AOR’s Odyssey back then was regarded as the Rolls-Royce of campers, with up-market and innovative features such as a hot water service, a tropical roof, deep cycle batteries and other niceties, included in its spec.

Keeping the comfortable queen size bed, but eschewing the internal shower/toilet of the Quantum, it was a smaller step up and was priced accordingly.
It was also slightly shorter than the Quantum and with an empty weight of around 1300kg (and a payload of 700kg), it fitted comfortably behind the same tow cars that had previously hauled the Odyssey. 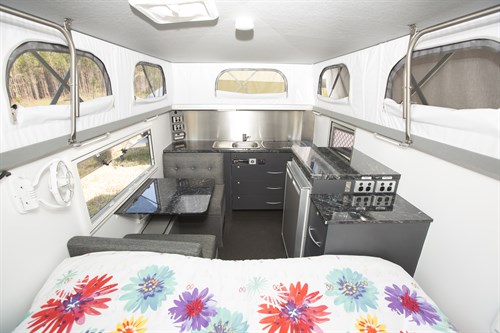 It was the transition vehicle that AOR needed and, not surprisingly to Budden, attracted customers to the Quantum, which has since become AOR’s biggest selling model, despite its $89,900 starting price tag.

The Eclipse, meanwhile, has taken up a clearly defined supporting role. Now sharing the same chassis, aluminium-framed and skinned walls and other main construction elements with the Quantum, its $77,900 entry price is a smaller step from the mid-$50,000 figure commanded by the top Odyssey models, and with its clever balance of interior comfort and outdoor living, it provides an easier transition.

The latest Eclipse Series II introduced in late 2012 is undeniably a big offroad warrior when compared to its Series I progenitor and particularly to an Odyssey. By sharing the Quantum’s chassis, it has grown to 4360mm in body length, tips the scales about 200kg heavier at 1590kg unladen and has a 600kg payload. Yet its width at 1950mm is still the same as a LandCruiser and it is every bit as capable as its predecessor of following one into tight and tough places.

Without the ensuite of the Quantum, the Eclipse appears much more spacious inside. With its stainless steel splashback that spreads across the full width of the camper, the marble-look kitchen, immediately to the right of the rear door, offers generous bench space to the left of the central stainless steel sink. The kitchen also includes a drainage board and three-burner glass-topped gas cooktop.

Large drawers with twin push-button locks below hold all your essentials for internal cooking, as well as the head unit for the Eclipse’s standard Pioneer AM/FM/CD/USB sound system. This sound system plays through two internal speakers.
A compact but comfortable café-style dinette backs up to the kitchen on the far wall, while the other seat is at the foot of the north-south queen size bed. It neatly serves as a convenient step into it.

Seven independently switched LED lights around the trailer make reading easy at night, while there is an abundance of 12V and 240V sockets, a TV aerial outlet near the bed, and sockets to connect your appliances to the standard 300W pure sine wave inverter when they need charging.
A Morningstar controller harnesses power from the twin 150W roof-mounted solar panels, while a BM1+ compact battery monitor/management system modulates the output from the twin 120Ah deep cycle batteries. Want
hot water? Wait as little as 12 minutes and you’ve got it via the Eclipse’s standard Truma gas system.

The AOR Eclipse in its Series II iteration is a serious offroad hybrid camper whose charm and immense capabilities come from AOR’s high quality engineering and insistence on keeping things simple.

As its manufacturer intends, it is the logical stepping stone for camper trailer and outdoor enthusiasts seeking more comfort and a faster set-up without losing the ability to access some of the most remote and beautiful parts of Australia.
All in the knowledge, of course, that the trailer will handle the rough and tumble perhaps better than its tow vehicle.

For all the latest in Camper Trailer products, news and reviews subscribe here today.