The X1 is a hard-core offroad camper trailer from Patriot Campers. Camper Trailer Australia's Editor Emma Ryan and the team from Patriot went on quite a journey with this camper, which they picked up at Alice Springs and dragged over the endless corrugations of the Tanami Desert to Wolf Creek before entering the Kimberley region at the Bungle Bungle Ranges. Emma says this was probably her favourite destination and somewhere every Australian should visit at least once.

The team then bounced along the beautiful King River Road, which meets up with the Gibb River Road at the Pentecost River Crossing. From there they continued up the Gibb to Mitchell Falls, which was a long hike on a hot day, but totally worth it for a swim in the cool water at the top of the falls.

It was only a few hours to their final destination, Honeymoon Beach. It was an epic journey of almost 2000 kilometres and we're pleased to say, the X1 held up beautifully. 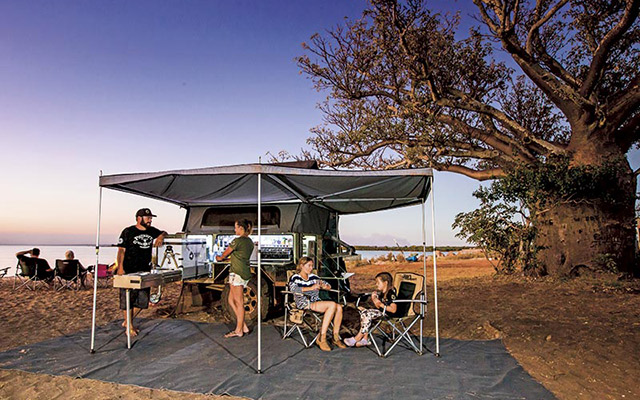 It was designed and built on the Gold Coast by Justin Montesalvo, a bloke who lives and breathes the offroad lifestyle. He wanted to create something that would was quick and easy to set up for overnight stops, but would also work as a fully functioning family camper trailer, for those wanting to spend days on end at their favourite spots around Australia.

The X1 is built around the concept of the rooftop tent, with everything you need for camping enclosed within the trailer below. The tent sets up literally in a matter of minutes, while the batwing awning, which remains permanently fixed down the side of the camper will take you a few minutes after that. This particular camper is fitted with Patriot's family pack, which means a bigger tent, a king sized bed, two storage draws at the rear of the trailer and a second bedroom for the kids.

The kitchen on the Patriot X1 is really nice. Its L-shaped design gives you plenty of working space; it's food-grade stainless steel, with cold running water and a two burner gas stove and grill.

Camper trailers don't come much better suited to offroad than the X1. The chassis is as strong as they come - laser cut, interlocked and hot dipped galvanised - and it sits nice and high on 33in offroad tyres. Patriot Campers is all about keeping the weight down - and the X1 pretty much gets a perfect 10 from us for offroad-ability.

Throughout the team’s two-week Kimberley jaunt the X1 demonstrated its versatility as a trailer suitable for families and couples, for both on-the-go touring and longer stays. Its exceptional build quality inspired confidence offroad, and its functional design concept made for stress-free, fully self-sufficient camping.

Patriot Campers has managed to embody the essential comforts of modern camper design in a trailer that retains the true spirit of low-maintenance offroad adventuring. You can travel to the most remote corner of the Australian bush with confidence, and have a warm shower when you get there. That’s what camper trailer travel is all about.

Check out the full review in issue #80 of Camper Trailer Australia magazine, out on 21st August, 2014. Subscribe today for all the latest camper trailer news, reviews and travel inspiration.