Outdoor adventure lovers who love to get well off the beaten track are often faced with a quandary: so many of their beloved toys, like mountain bikes, trail bikes and kayaks, don’t necessarily fit inside a 4WD. However, the toy haulers that haul them around are usually too big, wide and tall to go behind the 4WD to where the owner wants to get them.

One answer lies in the Quokka from MacroPod campers, a one-tonne all-aluminium toy hauler. It’s the width of an average 4WD and will pretty much go to all the places you want your 4WD to go to.

The driving force behind the Quokka is Andrew Kovach from Ritter Australia. He says the idea came about from working with specialists in aluminium fabrication, who are themselves keen campers with young families. Andrew says that over the years they found that they were taking more and more toys with them, but their small trailers weren’t enough. They therefore decided to come up with a better solution. 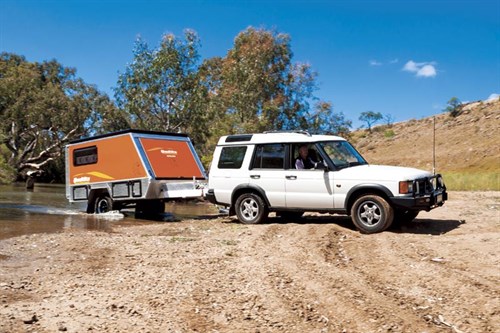 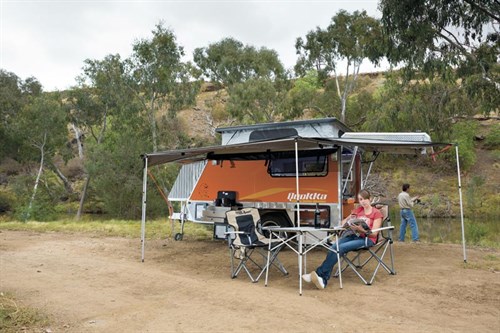 The result was a camper built entirely of aluminium, from its welded boxed chassis to its double-sided aluminium composite wall panels. This hybrid creation is named the “Quokka” after the small herbivorous member of the “macropod” family found off the coast of WA which, like its cousin the kangaroo, has a pouch to house its family — just like the toy hauler.

CONSTRUCTION AND OFF ROAD ABILITY

Apart from the standout orange body colour of the test unit, the first things that strike you about the Quokka is its compact 3500mm long 2000x2200mm tall box size and its beautiful aluminium construction.

To give you some idea of its size relative to other pop-top hybrid campers, it’s about the same travel height and width, but 700mm shorter than an Australian offroad Quantum and is 800mm shorter and travels 250mm lower than a Track Trailer Topaz, which it resembles slightly in profile

The welds are works of art and are displayed in all their glory on the Quokka’s large-section 150x60mm A-frame and top-hinged rear hatch, which gives full access to the vehicle’s toy storage and inside living and sleeping areas.

The A-frame itself is the business end of the Quokka and the wide-mesh aluminium stone tray houses a single 9kg gas bottle and a 10L jerry can, both protected by an aluminium checker plate stone-shielding and further aluminium mesh. This still leaves room to carry firewood, a chainsaw and nestled between the chassis rails with its weight down low, is a wind-down spare wheel. A long-travel flip-up jockey wheel and a Treg multi-directional hitch complete the A-frame fit-out.

The exterior is simple and business-like. A top-hinged angled front lid rises on telescopic struts to allow the full Queen-size bed with its striped canvas tent to slide out on tracks, Jayco camper-like. Once out, it rests cleverly on two rubber-padded horns extending from the A-frame.

The rear panel rises similarly on longer gas struts to give access to the interior, while the pop-top rises easily with little effort on four smaller struts once its retaining catches are released.

It’s then time to level the Quokka – a party trick that is both impressive and easy on uneven ground, thanks to the vehicle’s standard air bag suspension. Importantly, given the different toys that owners might carry within the generous 800kg load limit, the air suspension can be pumped up and raised to ensure the Quokka retains the same travelling height, whether carrying a trio of carbon mountain bikes, or a small Quad and several slabs of beer.

Inside, the Quokka offers a basic, but versatile and variable environment for campers and their toys.

The two wall-mounted bunks in the back can either form the seats of a dining table/lounge, single beds, or when folded, a cavernous load space.

Double-glazed hopper-style windows, with built-in sliding block-out/insect screen blinds combine with the four pop-top vents and the sandwich wall panels to ensure the Quokka stays cool in the hottest weather. One thing that is missing though is a simple zip-up or hook and loop-attach rear screen over the load/sleeping area so that overnight stops can be mozzie-free.

While there’s strip LED lighting inside and a large LED lamp outside, there’s a shortage of 12 volt and 240 volt (less necessary) power outlets inside the camper. A standard 75 Amp/hr deep cycle battery stored in a hatch on the right hand side has enough punch to support them.

For longer stays, or if you have an extra 5-10 minutes, the Quokka has a furled rear canvas room that drops down from the rear lid and is then hook and looped to the vehicle’s body.

The base of this tent pegs out quickly, but the vinyl floor and draft skirt are held in placed by more hook and loop and the latter is a bit fiddly to attach.

However it’s outside that the Quokka really shines, thanks to its great slide out galley and equally impressive awning.

The two-burner gas stove with its splash shield and twin drawers appears from a font checker-plate hatch along the near side of the Quokka, next to another hatch where a trigger-action hose draws water from the Quokka’s standard 110L under-floor tank.

A stainless steel preparation table slides out from the rearmost hatch, which has storage space beneath for pots, pans, etc.

But the clever bit is the series of folding stainless steel shelves, supported by a central buttress that join and provide a huge preparation and serving bench space stretching the full length of the Quokka body.

Covering you against the elements is an expansive bag awning which swings out, Foxwing-style to embrace the entire open length of the Quokka, from the extremity of the front bed to the tail of the open rear hatch.

It’s one of the most impressive awnings we’ve seen and it’s self-supporting, as the two wings are held to the Quokka’s body by tensioned tie-down straps. You will only need to put pegs into the awning’s four feet if it’s particularly breezy.

The quokka off-road toy hauler is a beautifully built, compact, lightweight and capable of catering for up to six people. It is the perfect toy hauler and a tough, roomy off-road pop-top camper trailer with everything you need for a comfortable bush camping experience and all at a competitive price.