When it comes to RVs you can choose from caravans, campervans, camper trailers and, increasingly, tray-back campers. Our dear lady editor recently sent me out on a mission to review the latest tray-back offering from Travelander, a local Queensland manufacturer based on the Sunshine Coast.

To be honest, I had never really taken much notice of this style of camper but after a day exploring the beaches of the Fraser Coast with the single- and dual-cab versions of this rig I was astonished at how practical, user-friendly and multi-functional it was.

Sitting secured to the trays of the latest Mazda dual-cab 4WD and single-cab Toyota LandCruiser, the Travelander Evron SC2 and Evron DC2 looked pretty flash with their shiny white gelcoat finish and countless hinged doors leading to what I could only image to be multiple storage areas and the usual kitchenette off the back. 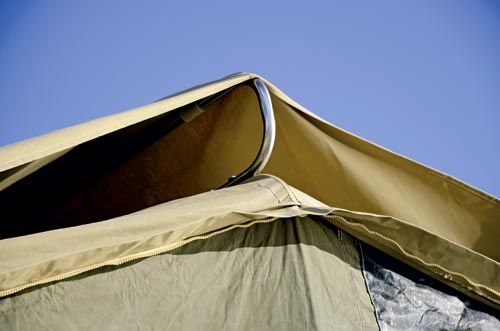 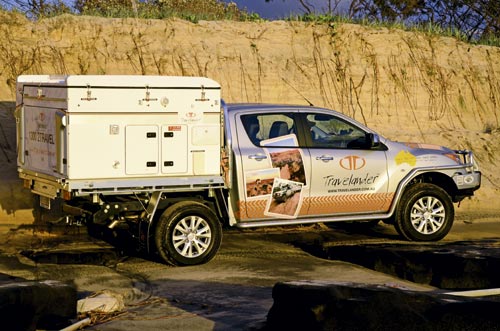 Well, and as they always say, don't judge a book by its cover; this is far from a normal camper. All it takes is a simple push of a button on a remote control to reveal what's hidden under the Travelander hood. Nobody in their right mind could complain about having a classy sleeping quarters and kitchenette assembled in less than three minutes, least of all me.

This camper is available in single- (SC) or dual-cab (DC) varieties, as well as in standard or premium. The only real differences between the single- and dual-cab is a touch more space and storage in the former.

The first thing that gets a big thumb's up from me is the fact I can tow my boat without having to forego the comforts of a camper trailer. With standard trailers this always poses a problem, as the boat sadly has to stay behind. Kayaking is a good option, but not ideal when you're talking croc-infested waters up north.

I was also impressed by the four manual wind-up legs, which are wide enough apart to easily get the Travelander on and off the vehicle at home or while camping, and without having to throw abuse at whoever is guiding you on. So, if it's a quick overnighter you can leave it on the ute, or for extended stays take it off, set up the full camp and still have full use of your vehicle.

The lack of ongoing trailer maintenance was another huge plus for me, as well as the additional fuel used when towing, rego fees and so on. I know I'd have to pay these on my boat, but that's something I'd be doing anyway and at least with the Travelander I'd be getting my money's worth.

Although you're not towing a trailer, there are still a few things to consider on and off the bitumen. There can be a bit of weight by the time you are fully packed with gear regardless of the model and sometimes you need to compensate for that weight. You can upgrade your vehicle with a different suspension kit such as rear airbags or a heavier-duty set of springs. Travelander can offer advice on which would best suit your vehicle.

Offroad is a no-brainer; trekking through
the rough stuff is always going to be that little bit easier without towing a trailer, despite your vehicle's capabilities.

As mentioned, a simple tap on a remote is all it takes to get this camper set up. A 12V electric motor drives a worm gear which unfolds and retracts the roof, hardfloor and tent section. This process could not be quicker or easier, and what really impressed me was how straight and tight the tent comes out - there was not a crinkle or a crease to be found. The whole process takes just a couple of minutes.

For extended stays there are a few add-ons, including a good-sized kitchen annexe with an optional full side enclosure. This does take a bit more time to set up, but it's still quick - it depends on how many cold ones are consumed in-between.

Packing up again is super quick on the main tent and entails folding the tent section in as you remotely close up. The kitchen annexe can be left connected if used frequently.

My biggest question was answered swiftly: what happens if the 12V motor fails or battery goes flat? No problem, as there is a manual wind-up override.

After the lightning-fast set up it's refreshing to step onto the raised hardfloor with a vinyl covering. As mentioned, the only difference between the SC and DC models is a bit more storage and floor space from the 600mm of extra length. Both have a few sliding drawers and a ladder to the innerspring queen mattress.

Interestingly, and although not part of the tent as yet, Travelander is designing a shower cubicle to be a sort of ensuit off the main tent, which is a great idea as it will eliminate having to go out the back for a wash.

Situated at the rear section, the kitchenette consists of a hinged three-burner gas cooker with combined sink, plenty of closed shelving, a pull-out fridge on the DC2 (two fridges for SC2), along with a decent annexe with detachable sides. It's spacious and it works, but if anything the internal cavity and shelving could do with better finishes to match the classy look of the rest of the camper.

Adjacent to the kitchen you'll find slide-out storage, a sealed gas compartment and a hot and cold shower set-up. On the DC2, the extra Engel is positioned closest to the kitchen. One thing I really liked was that, wherever you are, there's strategically placed lighting which can be switched on externally.

Like any decent camper, there is always more to offer than we can cover, and that's the case with the Travelander tray-back models. To sum it up, they are quick and easy to set up, compact and great for both overnighters and extended stays, and could even be used on a daytrip to the beach.

The single- and dual-cab versions are great and both serve their purpose. For couples either one suits depending on what vehicle you have. The DC version will also fit onto space-cab vehicles, leaving a bit of load space in between the camper body and vehicle back window.

Families would need the dual-cab version, of course, and while this does mean less space in the camper, in my opinion this is not too much of an issue as the kids could sleep in a swag or tent, or even under the fully enclosed kitchen annexe when it's set up.

For those with any boat bigger than a tinnie, this is the camper for you as you'll no longer have to leave it at home. If this doesn't tickle your fancy and you prefer the trailer system, then you might want to check out Travelander's range of trailers as well. It's the same system, just built on one seriously hardcore trailer.

> Ability to take a boat on tour

> Too many others to mention!

> Finer attention to detail in the finishes