Live life to the Fullest With The New MDC Robson XTT

For those who were lucky enough to meet him, Steve Robson from MDC left a lasting impression, and as a huge family man with a love for the outdoors the good folk at MDC knew just the way to pay tribute to him. So, the Robson XTT was created, and with room to sleep six, a huge living space and an affordable price, it promises to be the perfect camper for families large and small.

First up, let’s not skirt around the obvious here. The XTT is huge - it tips the scales at 1570kg but the ATM is still a huge 2250kg. And that normally doesn’t gel well with quick set-up times. But MDC isn’t a normal company, and their staff rack up more kays on their own R&D trips than most, so cumbersome set-ups weren’t going to cut it.

It’s actually a reasonably straight-forward process, and can be set up from scratch in around five minutes. If you’re fancy it also comes with a full awning and a shower tent that will add around ten minutes to the set-up time. It helps that rather than build a bulky steel frame and body the Robson XTT is sporting an internal aluminium frame wrapped in extensive composite panelling. It’s a clever manufacturing change that also makes the XTT significantly easier to tow, both on and off-road, and should excite more than a few beach camping aficionados. 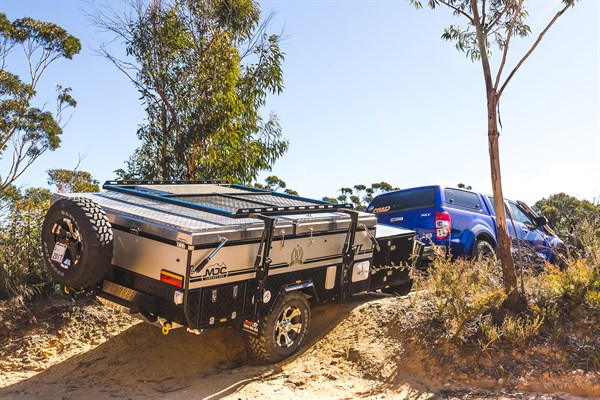 The Robson XTT performed flawlessly both on and offroad, never feeling unwieldy or imposing. Off-road the Robson XTT was surprisingly nimble considering its size, and despite its extra width, it didn’t pose too much concern on tight corners and the checker-plate sides protected it from being peppered with bush pin-stripes.

If you’re on the hunt for bells and whistles, the MDC should be suitably noisy too. The heart of the electrical system is a monster Projecta 240V charger that feeds down into twin 100AH AGM batteries mounted under the seats. There’s a few USB and CIG sockets inside too, with a 240V wall socket under the table powered up by a 1000W invertor.

Offering quality components, nicer finishings, more bench space, and an ability to spend longer at camp without worrying about the stresses of daily life, the Robson XTT is well worth a look.