Proving that they are continuously looking to improve upon and learn from their previous campers, the team at Blue Tongue have had a crack at refining the successful Overland XF model. They’ve cut and polished and massaged every square inch of it after years of customer feedback, trying to get the perfect balance between storage space and lighter weight. And they’ve done a pretty good job at it.

It’s obvious the guys at Blue Tongue have spent a lot of time carefully placing the various components small and large throughout the Overland XF S2. This is most noticeable when, despite punching in to the middle weight class, it stays poised and composed through rolling back-country roads and corrugated tracks alike, never once kicking the tow-tug in the rear.

The Series 2 remains a classic forward fold design, so it should be instantly familiar with anyone who’s spent more than an hour at a camp show and that’s a bloody good thing. Two people can effortlessly set this camper up, but there’s an easy-to-attach winch up front - should you feel like the hard work is getting too much. 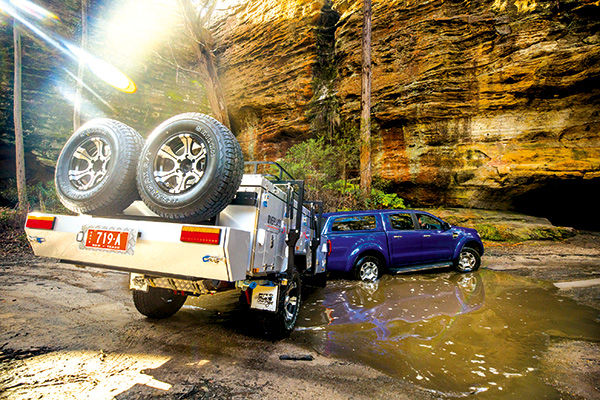 Top-notch features include a stand-alone Dometic hot water system, while the stainless steel kitchen has the usual Blue Tongue fare such as an integrated drying rack over the sink and a SMEV 3-burner cooktop. The 12V setup is more extensive than many of its similarly priced competitors too, and the storage space seemingly never ends.

If you’re after a well screwed together camper with plenty of nice touches, the Overland XF Series 2 won’t leave you disappointed.