5 steps to restoring a camper trailer

My old mate Stevo from Ezytrail Campers was kind enough to lend me one of his old second-hand Eden LX hardfloor campers a little while back, and while it had been sitting around in the weather for God knows how long, it actually really impressed me – so much so that my bank balance is now a little lower and my garage is lot fuller.

Like most projects, this one started out with me scratching my head trying to figure out what the hell I’d just gotten myself into! The good news is I haven’t bought myself a camper that needs a full rebuild – I’d be buried six foot under if I brought one of those projects again!

While this particular Eden LX hardfloor has been sitting out in the weather for some time now, it’s not very old, so the basic gear or, more specifically, the main structure has all held up pretty well. 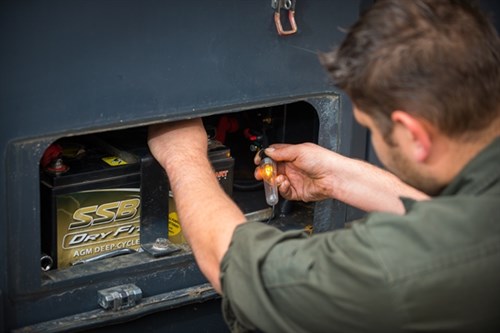 It’s mainly maintenance stuff that needs the most attention, but I did notice a bit of water damage on the inside around the bed base, and the tent poles are covered with surface rust from the moisture.

It turns out the water damage at the rear of the camper was actually due to the rear tailgate not sealing correctly. It was actually a nice and easy one to diagnose, mainly because you could simply follow the leaked water stains right up to the seal. The seal is an automotive style, which are usually pretty good. There are usually only two reasons why this type of seal will leak; the seal is damaged or incorrectly positioned, or the seal is not compressed enough to seal up properly. In this case, it was the latter as the tailgate’s locking latches weren’t adjusted tight enough.

It’s literally as simple as adjusting the latches position up or down the thread. Going down the thread will generally pull the door closer (tighter) to the seal and going up should loosen it up a bit. Ideally, you want the door to compress the seal down fairly tight in order to close and lock into place, but still allow a slight amount of give. For safety’s sake, I’ve elected to replace the seals while I’m at it; good old Clark Rubber has usually got all the goodies you’ll need for this sort of job.

2. FRESHEN UP THE WATER TANK

There are plenty of options when it comes to flushing the water tanks out, with everything from store-bought products to using household bleach, not to mention the old mixture of bicarbonate of soda and vinegar.

The Milton baby bottle steriliser is another popular option for some campers, too! For me, I wanted to make sure the tank was sterilised so I kicked things off by mixing a quarter of a cup of bleach with a few litres of water in a bucket, then added it to the camper’s water tank when empty before filling it up with fresh water. About ¼ cup of bleach to roughly 55L of water should do the trick. It’s best to run the outlet taps for a minute or two so the mixture gets flushed through the lines and then leave it sitting there for a few hours before flushing the system with fresh water. Then, to get rid of the bleach’s strong smell, I mixed about half a cup of baking soda with a few litres of water and added it to the fresh water tank. Once again I flushed it through the taps, but left it there for a few days before refilling the tank for the final time with fresh drinking water.

If you don’t want to use bleach in your water, another option is to use vinegar and baking soda to flush the water tank. It’s not as effective as bleach in terms of sterilisation, but it’s a good way to keep it maintained. Simply add about a cup of baking soda to a few litres of fresh water in a bucket and pour it into the water tank, which should be only half full at a maximum. This is to allow for the chemical reaction when you add the vinegar in! It’ll foam up and expand like that old rocket project back at school!

So make sure you leave the taps and the filler tube open for air to escape too. Tow the camper over a few bumps and flush it out with fresh water when you get home and you’re all done.

Oh, and don’t get any funny ideas about combining the methods; it’s definitely not a good idea to mix vinegar with bleach! Mixing chlorine bleach and vinegar will create chlorine gas, which is extremely toxic!

When I first tested the camper, none of the electrical accessories were working. And, after seeing a fair bit of corrosion around the place, I’d be lying if I said I didn’t think the entire system was buggered from water damage. Luckily, it was just the battery.

There are a few ways to diagnose a bad battery. I started by using a multimeter to check the voltage. Yep, you guessed it – it was as dead as a door nail! As a rule of thumb, if a battery reads zero volts (or close to) it’s a good indication it has experienced a short circuit. In this case, you’ll need a replacement.

If the battery is physically cracked, it should send alarm bells off that something is wrong, and while it doesn’t always mean it won’t work, it should be discarded for safety’s sake. If you notice the top of the battery is bulging, it’s a good indication that the battery has been overcharged at some point, too. If the above is all okay but you still suspect the battery is faulty, your next option is to get it load-tested to ensure its doing its job.

After replacing the battery with a good 120Ah deep-cycle unit, all the electrics work like a charm! While I was in there, I decided to mount the battery on a rubber plate to help filter out those harsh corrugations, too.

Gas cooktops are great for camping, but a gas leak can be a serious danger if left unchecked. So it’s always a good idea to regularly check all the connections and fittings for leaks, especially when you’re using it for the first time like this one.

The easiest way to check for leaks is to spray soapy water over the fittings, turn the gas on and keep an eye out for bubbles. If the soapy bubbles appear to get larger, or they become more active when you turn the gas on, it’s safe to say you have a gas leak. You can try and tighten the fitting, or you may need to apply some plumbers thread tape to the fittings thread.

Make sure you check the hoses for any damage too, and remember that any modifications or permanent plumbing on a gas system should be carried out by a professional with current qualifications.

When it comes to reliability, wheel bearing maintenance is an absolute must. Nothing will stop a camper trailer in its tracks quicker than a busted wheel bearing!

That’s exactly why I elected to replace the old ones with brand newies, and upgraded from standard hub seals to marine seals for a far superior seal.

It’s also recommended if you want to fit Bearing Buddys down the track, too! That way, not only am I certain the bearings and their adjustment is spot on, but I’ll keep the old set of wheel bearings as spares as well. Plus, I can adjust the brakes while I’m in there, too!

Check out the full feature in issue #103 June 2016 of Camper Trailer Australia magazine.  Subscribe today for all the latest camper trailer news, reviews and travel inspiration.