Colin Tidey wanted an external tap on his Jayco Penguin, but the Denman, NSW camper went the extra mile and had his wired to a separate circuit to the interior tap. To leave the tap circuit on in the van all the time runs the risk of a split hose or lost clamp turning on the tap and pumping out the contents of the tank. So to access water on a roadside stop, Colin and his partner Sharon Small now just have to turn on the red plastic-covered “rocket switch” on the front box behind the tap.

Blaxland, NSW camper Keith McCarron wanted a rear awning for his 4WD to help shade the fridge he carries inside. So he made up a frame from PVC pipe with elastic cord inside, which mounts to the roof rack, and sewed his own cover from rubber-backed curtain material with shower curtain material underneath. Two aluminium tent poles complete the set-up and the fridge is nicely shaded.

Having an outside tap on a camper is common these days and they’re handy for washing after packing up, but Doug and Joy Dunnet from Toronto, NSW went one better with a simple soap holder next to the exterior tap on their AOR Quantum. It helps to keep Doug’s dirty hands away from the sink when there’s cooking to be done. 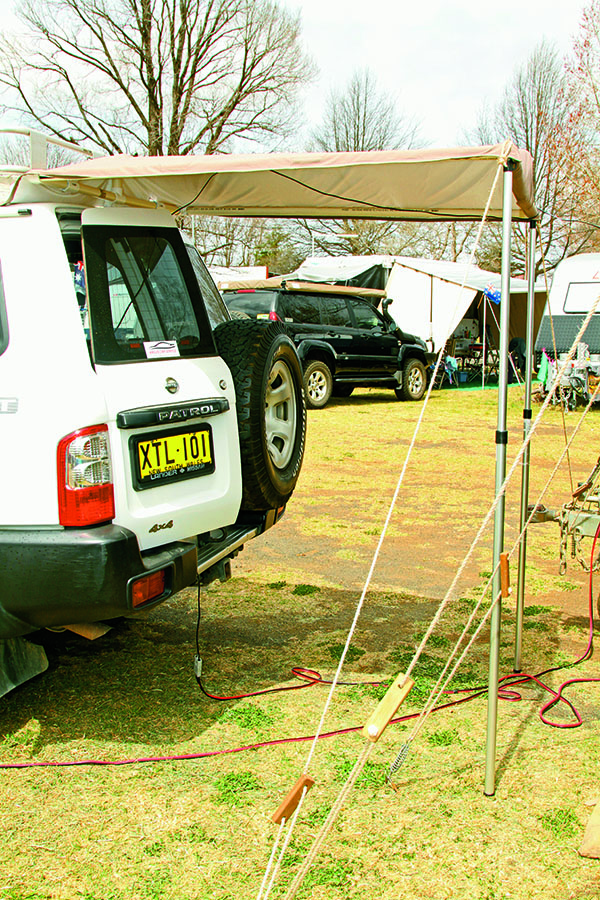 Keeping the Light Out

For those mornings when you want to sleep in, you don’t need a ceiling skylight streaming in early sunshine. Sharon Small solved the problem on her family’s new Jayco Penguin with a hook and loop-on cover that’s popped into place the night before, allowing the Denman, NSW couple to grab a few extra Zs in the morning.

Whether it’s mud or grass, camping brings plenty of rubbish into the camper, so Everton Park, Qld’s Greg Conlon adapted an idea from bush homes. Three stiff bristle brushes have been screwed to a bent aluminium bracket to scrub off detritus, and a flat extension to the bracket allows you to stand on the end to hold it all in place.

For those quick roadside stopovers for a cuppa, McLean, NSW’s Mickael Burkitt fashioned this bracket to hold a gas burner. With its legs, it can be placed on the ground if desired, but it also mounts onto the side of the camper with one edge behind a bracket, not far from the gas bottle for convenience. When finished with, it travels behind the side bulkhead to which it mounts.

Check out the full feature in issue #85 February 2015 of Camper Trailer Australia magazine.