Lake Placid is one of those places that feels much more remote than it really is. The 'lake' is actually a broad stretch of the Barron River, surrounded by rising mountains and located just 15km north-west of Cairns in north Qld. The sense of remoteness comes partly from the wild terrain and partly from the fact the lake is tucked away down a meandering side road off the Cairns Western Arterial Road.

The lake lives up to its name, since it
is indeed a very placid body of water with a rather Scandinavian atmosphere. Although not suitable for swimming or fishing, its fjord-like appearance strikes a pleasing balance with the wooded mountain range. 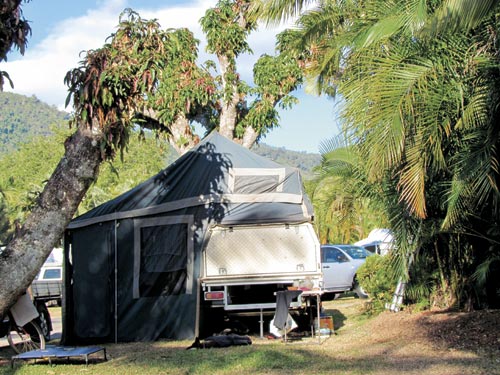 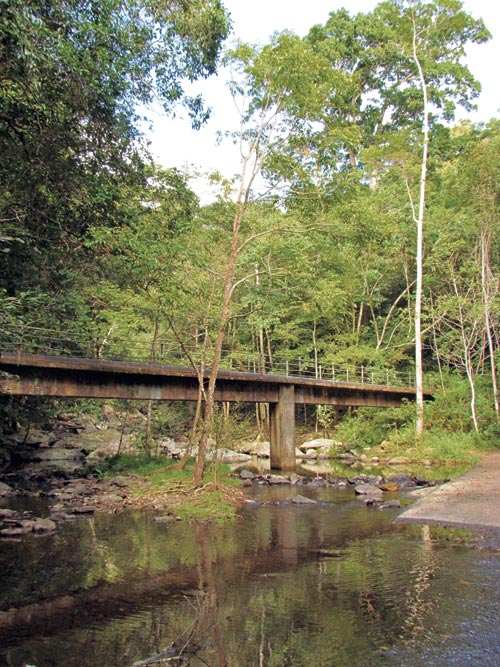 Just metres from the lakeside, there is a conveniently-located caravan park. Lake Placid Tourist Park is a four-star Top Tourist Park set in 14-acres of tropical rainforest. The park extends up the lower slopes of the hillside, with smaller groups of campsites clustered beneath the overhanging shady trees.

The park is pet-friendly, but the section towards the back is pet free. Camper trailers are often directed to this pleasant bushy section of the park, which has its own ablution block with laundry facilities.

There are two larger toilet and shower blocks, with laundries in the main part of the park.

The park is relaxed and tropical, with everyone visibly taking life at an appropriately placid pace. There is a large and tidy camp kitchen, and some covered gas barbecues beside a swimming pool. The camp kitchen is well-equipped with a large fridge/freezer, two-burner electric hotplate and microwave, kettle and toaster. Two sinks and loads of tables and seating ensure there is plenty of space to work in.

Park owner and manager Philip Jacka was quick to give us some tips on sightseeing in the nearby area, and there is more to see and do than you might first expect.

WALK ON THE WILD SIDE

Lake Placid is at the lower (south-eastern) end of Barron Gorge National Park, which is a Wet Tropics World Heritage Area.

The national park follows the Barron River upstream to Barron Falls, on the outskirts of Kuranda. The gorge is steep-sided for most of the way and the river has several waterfalls and areas of rapids.

Close to the caravan park at Stoney Creek, a tributary of the Barron River, there is a short trail known as the Weir Track. From the car park, it crosses the creek on a footbridge and then follows the stream into the forest. The track is stony and heads uphill the whole way, so the return journey is very easy.

The path is lined with rainforest plants, including figs, vines,palms and colourful fungi. The creek gurgles and splashes beside the trail, giving a very relaxing feel to the walk.

If walking isn't your thing, there is a winding scenic drive along Barron Gorge Road to Barron Gorge Hydro Power Station. From the road you catch glimpses of the river below, and at one point you can park and walk down some steep stairs and clamber over rocks to get to the picturesque river strewn with large boulders.

The road ends at a car park near the power station's visitor centre, which has exhibits about the hydroelectric power scheme.Outside the visitor centre you can look up to see the impressive Surprise Creek Falls, which cascade 243m down the exposed rock faces of the steep mountainside.

The top end of Barron Gorge NP is accessed via Kuranda. Just out of the village, you can walk along a path to Barron Falls Lookout,which has an amazing view into the gorge.

Barron Falls can be spectacular after heavy rain, but usually has only a modest amount of water running down the cliff face. Of course, there is a reason for that - most of the water is diverted to the hydroelectric power station.

Kuranda is a mountain village with a relaxed, hippy-style atmosphere. Here you can find many markets, shops, cafes and restaurants along the tree-lined streets.

It's a good spot for a coffee, an inexpensive lunch or a bit of retail therapy, before heading back to Lake Placid to once again take it easy.

> Barron Gorge Hydro Power Station was commissioned in 1963 and given a major refurbishment in 2011. It uses water from the Barron River to drive the generators, then returns the water to theriver. The power station produces 66-Megawatts of power, which is enough to power 660,000 light bulbs, and saves an amazing 260,000 tonnes of greenhouse gas each year.