Admittedly, we hadn’t driven some 3000km from Melbourne just for the culinary delights. The principal attraction was Kings Canyon itself, with its stunning rock formations, hidden waterholes, picturesque ghost gums and sheer cliff faces where the sandstone looks as if it has been cut with a knife.

The mid-April weather had turned unseasonably hot and humid and with 38°C temperatures expected, we needed to start the 2-3 hour walk around the rim of the canyon before dawn to avoid the heat of the day. The trek begins up a steep incline of rough rock steps that rises about 150m.

The walk follows the northern rim of the canyon, winding around rock formations studded with the occasional picturesque ghost gum. Here and there outcrops of “ripple rock” can be seen. If the corrugated surface of this rock looks like the ripples you might expect to see on the floor of a lake or river, that’s exactly what it is, or more correctly, was. Created some 400 million years ago when this area was an inland sea, the delicate patterns of water action have been frozen in time. It’s all the more remarkable because it is found on the rim of the gorge some 250m above the canyon floor. 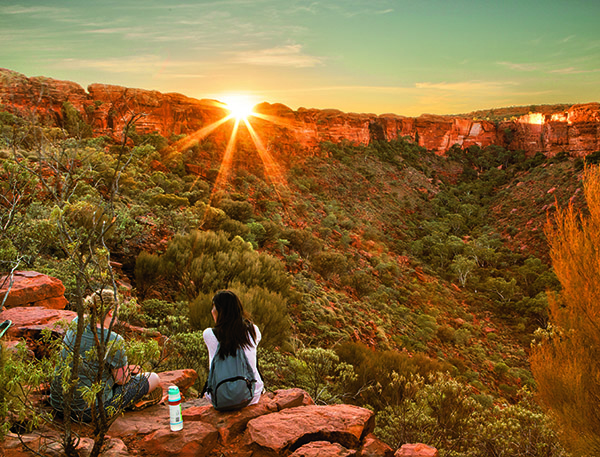 Where the track approaches the edge of the canyon wall, the views are outstanding, however, anyone who suffers from vertigo may find the drop into the gorge below a little intimidating. The sheer cliff faces have been created when sections of the canyon wall have sheared off like icebergs calving from a glacier.

Standing near the cliff edge, the deep fractures in the rock at your feet take on new meaning when you realise the last major rock fall here was less than 80 years ago. Put another way, in geological terms, it’s quite a regular event — and not one you would want to be on top of. Interestingly, the rich red colour of the sandstone is the result of oxidisation and the rock interior is pure white. Originally formed from white beach and dune sand it crumbles easily, much like chalk — something else to (not) think about when standing on the edge of these cliffs taking in the view.

The track crosses to the south side of the canyon by way of a series of stairs and a footbridge across the far end of the gorge. At this point there is also a short 150m walk along the gorge floor to an idyllic permanent rock hole fringed with large trees and huge cycads, the latter being remnants from a time when central Australia had a more tropical climate.

The walk back along the south rim of the canyon is less spectacular but still very scenic. As it slowly descends to the car park, the track passes a small valley of sandstone beehives reminiscent of those seen at Purnululu in the Kimberley, WA.

Kings Canyon Resort offers cabin-style accommodation as well as having an extensive shady and grassed camping area. It’s worth noting that, although you’re within a national park, pets are permitted within the confines of the campground. In the evening, the last warm rays of the setting sun light up the George Gill Range to the east of the campground: it’s standing room only in the viewing area, as visitors flock to catch this event.

Getting back to the “Under a Desert Moon” dinner, this really is an event not to be missed. Head chef Hugh Goldson worked in top restaurants in Europe before moving to Australia and, prior to his present position at Kings Canyon, was head chef at El Questro’s prestigious Emma Gorge Resort in the Kimberley. “Under a Desert Moon” comprised several small courses that testified to chef Hugh’s prowess in the kitchen (the pork belly was to die for), with each course was accompanied by a glass of wine chosen to complement the food.

THE SKY AND BEYOND

Leaving Kings Canyon and the bitumen behind, we headed north on the permit-only Mereenie Loop Road (permits can be purchased from Kings Canyon Resort). While this road has been materially improved over the years, its rough and sometimes corrugated nature remains best suited to 4WD vehicles. Just to the north-west of the Loop Road’s junction with Namatjira Drive is Tnorala (Gosse Bluff), a 140 million-year-old meteor crater.

From the flat plain the 5km wide crater looks not unlike the myriad other small rocky ranges that dot the outback. Only when you climb over Tylers Pass a little further north and look back, do Gosse Bluff’s extra-terrestrial origins become apparent. A valley eroded through the rim provides vehicle access to the interior of the crater by way of a sandy and corrugated 4WD-only 6km track from the main road.

Shortly after Tylers Pass, the road turns east to parallel the West MacDonnell Ranges, in the process passing Redbank Gorge which has two designated campsites. The area nearest to the main road with its shady trees and gas barbecues is arguably the better option as the second campground closer to the gorge has great views but is perched on an exposed ridge. Continuing east the road passes near Mount Sonder (the fourth highest peak in the Northern Territory) before reaching Glen Helen Resort, a popular base for those exploring the area.

Located on a large permanent waterhole in the otherwise dry Finke River, Glen Helen has a bar and restaurant as well as an extensive campground with lawned areas for those with tents. However, the camper trailer fraternity will find themselves relegated to bare and dusty campsites. We subsequently discovered the Finke River Two-Mile camping area, a large expanse of white sand and river gravel punctuated with picturesque river gums adjacent to a permanent waterhole. Just a couple of kilometres from Glen Helen and its facilities, the Finke River Two-Mile offers self-sufficient travellers a superb campsite. Access from the main road is by way of a sandy 4WD-only track but towing a camper would not present any problems other than a need to be aware that some of the sandy stretches along the riverbed can be quite soft.

BOUND FOR THE ALICE

Heading back towards Alice Springs, the main road passes a number of tourist attractions including Ormiston Gorge, Serpentine Gorge and Ellery Creek Big Hole all of which have camping areas as well as permanent waterholes that hot, dusty tourists can cool off in. Other interesting destinations include Aboriginal ochre pits with their banded rock strata of vibrant colours and Standley Chasm, famous for how the midday sun lights the orange walls of the gorge (regretfully, another no show on the occasion of our visit due to the ever-present cloud cover).

Perhaps you require a degree of comfort as offered by a resort, or maybe you have a more adventurous streak that sees you preferring to camp under the stars. Either way, visitors to this beautiful and ancient landscape will be sure to enjoy their time in central Australia and the West MacDonnell Ranges in particular.