Around early June back in ’93 we were returning to ‘Bulltown’ for a weekend exploring and fishing, having landed a few browns there a month before.

It was early winter in the High Country but the forecast was not much more than a bit of drizzle Friday night and Saturday morning. So five of us nicked off early from work on Friday, with Ralph the red heeler crammed into my well-travelled Shorty NA Pajero and my mate Hewey’s HiLux. This was 25-odd years ago before the days of mobile phones, and even though I thought I knew it all, in reality, I had plenty to learn in the world of offroading.

We dawdled down Bulltown Spur track in low-first without incident until the last bend before the river. It seemed higher than the gentle stream we’d splashed in a few weeks ago. 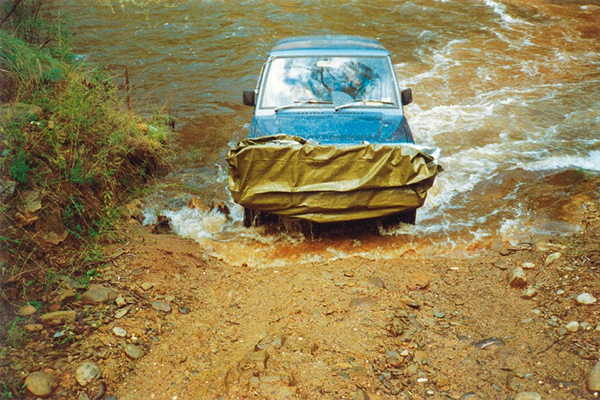 Deer hunters were on the other side of the river though so we tarped up, drowned the engine electrics in WD-40 and crossed, before setting up under cloudless skies for a few frothies around the fire.

The little rain overnight was gone by the time we rose. Clouds had rolled in and there was the smell of rain in the air, but it was dry. After brekkie, Hewey and I waded up at my secret favourite trout spot on the junction of Good Hope Creek and Crooked River, but by our second cast the rain arrived. We soon headed back, soaked, for dry clothes.

It was wet but still, so we spent the day mucking around, and by late afternoon I was in my last set of dry clothes. We still had fun though, and lamb was roasting in the camp oven. With the river higher and flowing faster than anticipated, we had marked the river level in the morning, checking through the day… just in case. We even tidied up camp ready to retreat, although no one really thought we would actually need to leave in a hurry.

About 5pm on Saturday arvo, the rain eased and the deer shooters headed home as planned, radioing us about the track conditions near the top: “Crossing no issue, track was OK.”

Great! Time for a beer!

The three boys, Steve, Hewey and I, headed down to the river, VBs in hand to take a last look at the markers for the day. Having showed no movement on the river, it was now six inches or so inside the water line, and more disturbingly, the water was changing colour.

“Shit!” We looked at each other and all knew what the answer was: “Let’s go.”

We scrambled back, calling out to Kimberley and Karen, “we’re going!”. Having half packed earlier, it took honestly no more than 15 minutes to throw everything into the cars (tents and all) with Hewey ready with the nose of the HiLux at the river’s edge.

By now, in the last light of the afternoon, the river was far higher than expected, a very dirty brown colour and rapidly flowing. Aged 25, invincible and with low-first engaged, Hewey edged in before being violently smashed sideways into a rock as his front wheel hit the torrent. With a quick snatch backwards, he was back on terra firma.

Hewey immediately scoffed at the mere suggestion of a second attempt (had he gone further, we reckon he would’ve been swept downstream). We were stuck.

After a very awkward silence, we reversed back the 30m we'd just come and set up camp. It was Saturday night; we were wet and cold. With camp reset, we jumped on to the CB for help. Luck was with us. We picked up a faint signal of the last 4WDer heading out of Talbotville; we were eternally grateful he took us seriously and noted our numbers down with intent to pass on the news.

Back around the fire we contemplated the quandary we were in. The rain stopped and we looked up to see a sky full of stars. Finally! At least we’d a roast for dinner.

So braised steak jaffles for dinner it was, setting the scene for the first of many, many “throw out the roast” jokes I’d hear over the next 25-odd years. In my defence, just what do you do with a ¾ cooked leg of lamb roast and spuds in the back of a Shorty Pajero?

We sipped a few cans and went to bed scarcely believing our situation.

The next morning we hung out our clothes, took stock and inspected the river. We were stunned by its speed and height. It must have risen some two or three metres in that 15-minute pack up – just like that! Sure, it had rained, but not that much. (Apparently it was carrying the season's snowfall from the week before.)

We checked our food stocks; the roast was to be our last meal but thankfully we carried surplus as recommended in Ron Moon’s High Country survival guide. So out came the boxes of assorted tinned muck, soups and pasta that had accompanied us on every trip. Hardly fine dining but there was enough for us for three to four days, and lack of water wasn’t an issue.

We settled into a long tiresome game of 'watch the river drop'. All day Sunday – sure it was dropping, but not fast enough. Maybe Monday (gee, hope we don’t get the sack for not turning up to work?) No chance on Monday, Maybe Tuesday?

It was an awkward time and no one wanted to be there. We didn’t know if the dude from Talbotville took us seriously and phoned home. We listened to the local ABC expecting to get a mention – nothing. There was no sign of anyone out on the track looking for us. Bloody hell: what happened if it rained again? We checked the CB hourly for life. During the day, nothing but static. At night it cleared up and we could hear conversations clear as a bell from way up in Queensland, but they couldn’t hear us. Were they ignoring us? We tried to get a rise out of them. “Wally Lewis is a %$^&!! Rugby league’s for girls! You deserve cane toads!” Nothing. We were still stuck. More SPAM?

Finally on Tuesday, we decided it was the day. The river was almost back to Friday's levels, but after so much water someone had to walk it to make sure it was OK. Out I went and finally, gleefully, made it to the other side. We selected our line, packed up camp and waited until 3pm for the maximum drop, with enough light for the five-hour drive home.

The river crossing, after the nerves, was thankfully an anti-climax and all went well. Calm on the outside with internal fist pumps all round. On our way to Dargo we spotted a ranger clearing the track of fallen trees. Bounding out of the cars we explained our predicament. “Yeah Yeah, I knew about you in there,” he said in his country drawl. Apparently he was gonna come check on us tomorrow if he hadn’t heard. At Dargo, we ate, made our long-awaited call home from the public phone outside the pub (remember them, people?) then pointed the cars towards home.

The dude who took our CB call from Talbotville (I think you were from Traralgon) did indeed phone my old man and Bush telegraph took over from there. I lost your number and don’t know your name but thanks, champ.

We never did catch any fish that trip (the river just moving too fast to fish) nor did we lose our jobs, but we did learn plenty.

At the foot of the Bulltown spur track is “Bulltown” camp. In 1861 at the height of the gold rush it was home to several thousand punters trying to strike it rich, but now it's welcome respite either at the start (or end) of the Crooked River track.