For the last four years, Patriot Campers, under the direction of company owner Justin Montesalvo, has taken the X1 to victory in its respective category at the CTOTY awards. In an in-depth interview, Dan Everett discovers the motivation for this intrepid entrepreneur and the secret to Patriot’s success.

CTA: Things have been ticking along quite well at Patriot for a while, how big is your operation now?

JM: All up, between Patriot Campers and the sheet metal shop, we’re at just over 90 staff now and have just taken over our third building so we’re sitting at about 6000m2. We have a production line for the X1s and X2s and then we have other facilities for manufacturing the custom goods like Toy Haulers, Super Tourers and those sort of things. 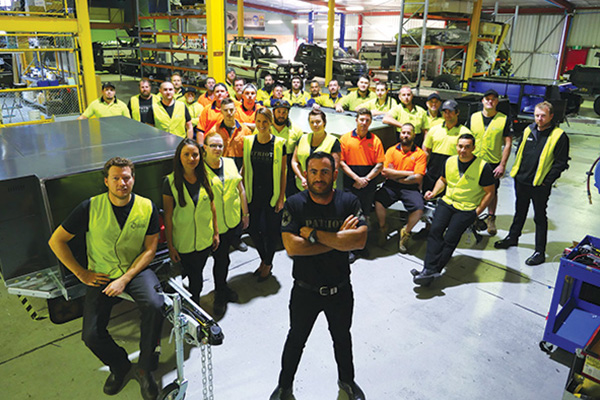 CTA: To a lot of people, Patriot has boomed out of nowhere and started dominating the camper trailer market. Obviously, you started somewhere; what were you both doing 12 months before you sold your first Patriot?

JM: Twelve months prior I was in my eighth year with my sheet metal business in Brisbane. We utilise all the processes that are used in our Patriot campers: laser cutting, fabrication, powder-coating, electrical assembly, so we were pretty well geared up to manufacture the Patriot campers.

CTA: You’ve done a fair bit of travel all over the country both before and after you donned the Patriot shirt, what has been your most memorable experience out on the tracks?

JM: My most memorable experience would have to be the first time we went up to Cape York with an X1; it was our first real shakedown. We’d designed and built the first X1 and had done a couple of local trips, then once we were happy with the design we took it on its first proper trip right up to the top of Australia.

CTA: If you could only head back to one spot where would it be?

JM: The Kimberley, [especially] Honeymoon Bay. It’s just like nowhere else that I’ve seen in Australia, the diversity of the country side and the journey up there. It’s just so remote, so far away, you could be anywhere in the world, you could be on another planet.

CTA: What is it that makes Patriot stand out from the crowd?

JM: There are a million things. I think all the Patriot products are so left-field, they were and still are unlike anything else on the market. The style of camper is starting to be imitated but we’ve stayed so far ahead of the competition by refining the design every single year. We’re constantly using them, we’re doing the R&D and making them better and better. By the time somebody produces that style of camper trailer, we’ve already left them in the dust.

CTA: Your winning camper of 2017 is the first we’ve ever seen with a grand staircase leading up to the master bedroom. Should we expect any more big design surprises for the 2018 competition?

JM: The new X2. We’re about to relaunch the X2, the marketing stuff has all been done last week, we’re going out to shoot the video on it next. The X2, for me, is taking it back to where Patriot started. It doesn’t pretend to be anything it’s not. It’s super lightweight, can be towed behind absolutely anything, it’s stupidly fast to set up. You drive like there’s nothing behind you, it’s got a Tare of 640kg. The new X2, for me that, is the trailer, the one I’ll be using out on the weekend every time.

CTA: How did you feel when you got your first phone call to say you had won CTOTY?

JM: Completely overwhelmed. There was zero expectation we were in the running, we were brand new to the industry, didn’t understand the politics, didn’t understand how it all worked. But we knew when we were at the our CTOTY we had something pretty special just from the reaction from all the judges, and probably more importantly, from everybody in the industry. There were industry people there who were happy to get excited for another Australian manufactured product so different to everything else, and then the there were the guys who were a little stand-offish. It was really surreal.

CTA: Did you ever think you’d be able to pull off four wins in a row?

JM: No way. But now looking back at it, especially after 2017, and the changes we made, there are a lot of very clever innovations in the X1 – the new staircase, the way our tent works – it just falls in line perfectly with what Patriot Campers is all about. We don’t follow the crowds, we could produce a budget trailer to tap into that market if we wanted, we could go and build a hardfloor like everybody else with the resources and manufacturing and design processes I have at my disposal now but we won’t. If it was about market share and increasing revenue it’d be very simple to do but that’s not what we’re about, not what the brand is about.

CTA: You’ve both made a career out of chasing your dreams, what advice would you give to someone looking to chase theirs?

JM: There’s a quote our whole company lives by from Richard Branson: “If someone offers you an amazing opportunity and you’re not sure how to do it, say yes,” – it is at this point when you try figure out how to make it work. That’s our philosophy. When someone here comes up with an idea, whether it’s an idea for the camper trailer or production or marketing, it’ll be so left-field you’ll get a lot of people raising their eyebrows, but we listen and have a crew of people that can make that a reality. It’s epic.

CTA: Every design you do is either completely left-field or full of lots of little engineering ideas, where do all these ideas come from?

JM: It comes from using the product, that’s it, that’s the reality of it. I’ve stated it a thousand times, we never got into this industry for the Patriot X1 or any of our products to be commercial products, we’ve built always primarily for ourselves. And we test, and we use our products. It’s a whole lifestyle, we live and breathe this stuff so when we find something that’s not quite right with one of our designs we’re agile enough that we can change it. We listen to what our customers want and the advice they give us, and we use the product ourselves.

CTA: I’ve gotta ask, you’re both routinely seen on the show circuit. Who has more success when you’re closing out the till at the end of the day?

JM: Sarah. One hundred per cent, without a doubt. I’m not a salesperson, I never have been. It’s not what I get out of bed for. I think with all the promotions we do and all the marketing. I’m so passionate about the product that it’s easy for me to come across like that. But as far as sales go, Sarah is and always has been our secret weapon. Sarah is one of the best salespeople I’ve ever come across. She understands people and everyone relates to her. She knows the product so intimately, any question anyone ever has she knows [the answer] firsthand. There’s no bullshit with it.

CTA: You’ve been competing in CTOTY since day dot for Patriot, what is it that sees you coming back year after year with a fresh camper?

JM: Probably, selfishly, it’s the self-satisfaction of being named the best in our category in this industry. That’s the motivation behind it, the motivation for us coming back to CTOTY and raising the bar four years in a row. It’d be difficult for me to come back with the same model the next year.