Waking up on the thin mattress inside my little pop-up tent moments before the sun rose, I marvelled at the strange sounds of the African bush. There was the sort of cacophony of bird calls you expect back home but they were sung by a totally different choir. I’d slept well, too, very well for an old bloke a half inch off the ground. Either the Kalahari sand is softer than ours or Jaco Nell’s supply of local red wine had plenty of effect.

‘Breakfast was on the brai’ as they say roughly three times a day in Africa. So far, in the first three or four days, the nearest thing to a vegetable I’d eaten had been a leaf flicked through the car window. And us Aussies pride ourselves on being meat eaters?

Gordon was up and kicking the fire into action. Derek, one of the Front Runner team whose desert experience in the old compulsory military Afrikaner army made him an expert at track reading and animal spotting, was also up and brewing coffee. The three eldest blokes in the camp were up at least an hour before the younger men surfaced. It’s something I’ve noted more as I’ve grown older, almost as if us older people don’t want to waste a moment of glorious day light. 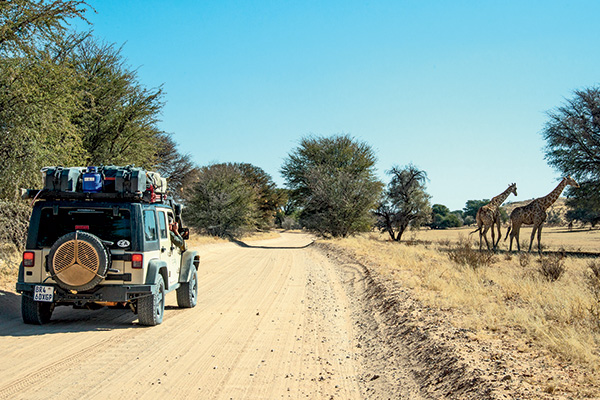 It certainly was glorious, too, camped out on a slight rise of a sandhill, overlooking a huge flat clay pan with a herd of springboks crossing in the distance. Strange looking animals are what you come to expect travelling in the bush in Africa.

Derek, Gordon and I shared mugs of coffee around the fire. I’d been quizzing Derek a fair bit about his army days, trying to get him to open up a doorway to that apartheid Africa of the old days. I’ve been to South Africa a few times over many years since a first trip through Cape Town in the 1970s so I’ve seen the transition first-hand but getting the ‘behind the door’ stories from Derek was awesome. But, as usual, Derek kept taking the conversation back to his number one love –spotting the wild animals and birds hiding all around us.

I lived through that time when the whole world turned against South Africa and its apartheid policies but, as usual, what a government does doesn’t always reflect the people. Talking to the people who lived through it revealed a whole different world view but then the reverse was going on, too. I reckon there’s a large bit of the world that thinks us Australians are pretty racist because of the way we’ve treated our own Indigenous peoples.

It’s all about the lens you’re viewing life through, isn’t it? In the army, Derek, whose parents had migrated to Africa when he was a child, had to learn Afrikaans because that was the language of the South African army. Nowadays, it’s considered the ‘language of the oppressors’ by some groups. But, to my mind, nobody has the right to criticise a system or a time unless they lived through it themselves. Derek had no idea Australians had fought in Vietnam and I didn’t know that the South African army had fought almost constantly in wars throughout that sub-continent in what they considered peacekeeping roles. Both of us were victims of the propaganda of the time. People are people, only governments create problems.

Funny what a cuppa around a campfire can bring out. As the others slowly rubbed bleary eyes and kicked the sand out of their shoes, Derek, Gordon and I were already checking the roof racks and clamps on our vehicles looking for signs of wear. That was another realisation for me on this trip, how damned good the engineering of the Front Runner gear is. We were hammering these little vehicles down horribly corrugated tracks that’d give the worst of the Aussie outback a run for its money yet not one thing came loose or broke during the entire test.

We broke a few cars, though. The Kia Sorrento, with its low belly and two ply tyres, was a victim in waiting anytime the sand got too soft or the rocks too sharp. But, amazingly, it was also the best vehicle of the lot to travel in - when it was still going forward, at any rate!

Amazing? Well, for blokes like Gordon and me who haven’t had much experience with new Korean soft roaders, the levels of luxury, the overall quietness and rattle-free ability all propelled by a decent amount of power was a revelation. Yes, there was a small issue with the radiator being punched almost into the fan after a few nose downs into the billowing sandhills and we did have to go back and collect nearly all the underbody panels during the trip but with a bit of lift and some decent tyres, the thing would have been a desert travelling weapon.

I never said that. Or maybe I can’t believe I just said that. Prejudice is something that’s firmly locked into what’s happening at the time isn’t it? I remember when Korean cars were considered crap. Not any more, it seems.

One of the other drivers did an awesome job of getting it bogged on a soft sandhill when the car in front of him stopped and he lost all forward momentum. The Kia had a couple of MAXTRAX on the roof but it wasn’t until one of the other vehicles contributed another couple of MAXTRAX that we could get it free. Even though the Jeep had a winch and we had some snatch straps, too, the fact is when things get that deep, you need MAXTRAX to bounce a stuck vehicle back up to the surface. That’s because the sort of torque required to pluck a buried past the axles vehicle out of sand is going to twist a monocoque vehicle.

The Africans love their MAXTRAX, as I guess they would when walking home might mean heckling the hyenas or laughing at the lions, so Front Runner built a beautifully simple mounting system for the famous Aussie product to suit their racks. Weren’t we glad of that? The mounts will take four MAXTRAX and, once again, I learnt that, in some situations, four of the orange Aussies are the only way to get a vehicle moving again, this side of a back hoe.

Halfway through the first week in Africa and I’d already put in my order for some of those mounts for Milo and also for my own ‘potjiekos’, the three legged cooking pot that’s another  specialty. Yep, after cooking one of the best oxtail stews I’ve ever tasted in a potjieko, I just had to have one.

See you on the road!

Check out the full feature in issue #110 of Camper Trailer Australia magazine.  Subscribe today for all the latest camper trailer news, reviews and travel inspiration.