Camper Trailer of the Year 2017: Introduction

Imagine rounding up 14 of the best camper trailers in the country, hauling them all the way up to the white sandy beaches of Bribie Island and letting them battle it out over the course of an entire week. When it comes to absolutely insane week-long adventure, Camper Trailer Australia’s annual Camper Trailer of the Year event takes the cake, hands down.

This time around, there were more laughs than a pack of hyenas passing wind at the dinner table and, when it came to the level of competition between our participating camper trailers, well, it got pretty fierce! 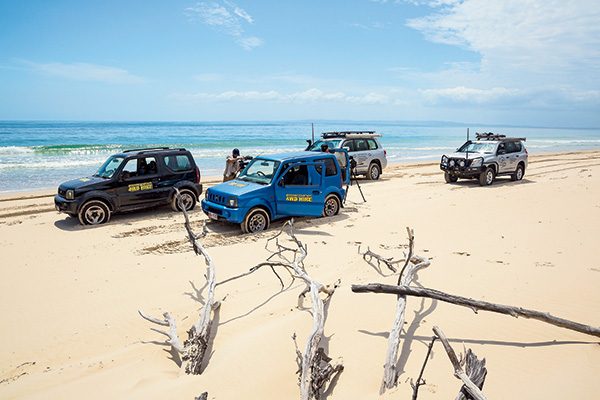 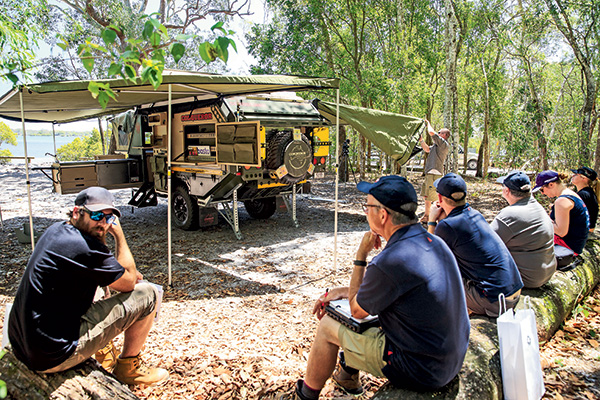 If you haven’t followed this event in the past, it’s worth noting that the finalist camper trailers are split into four separate categories: Open – up to $25K and Softfloor (Part 1), and Hardfloor and Hybrid campers (Part 2). It helps compare apples to apples and oranges to oranges, which allows our judges to really judge each camper on its merits and according to their main pre-determined criteria.

So now that we’ve got that out of the way, I’ll take you right back to the start of the week where all the fun began. All of the participants/competitors, judges, video/photography crew and CTA staff and event management team met up at the Bongaree Caravan Park on Bribie Island, Qld, to do one final reconnaissance mission of the testing grounds and shooting locations on the island. And what a beaut spot it is, too! The caravan park is that close to the ocean that you can practically cast a line out from your camper – if there wasn’t a road smack-bang in-between! Let me say this, though, watching the sun set over the water in the late arvo is hardly a hard gig, especially with a cold can of liquid courage!

But we were actually here to work so when Monday morning arrived, there were a few sore heads after the initial ‘team bonding session’. It’s actually an important part of the camper trailer testing process; to work out which one keeps the beer coldest...or so I keep telling myself!

The campers in the Open – under $25K category hit the sand with our video and photography crew for some adventures up and around Woorim Beach. And if they thought it was going to be a leisurely drive, they were dead wrong; what an absolute hoot! With soft sand, high tides and a couple of camper trailers getting caught in the sand, there was no shortage of bogged 4WDs. Thankfully, we had the recovery crew from Vehicle Components there to lend a helping hand every time a rig went down. A massive thank you goes out to these guys. They dead-set worked their guts out for the entire trip! They might have thought they’d be up for a quiet, relaxing week but I think they ended up recovering just about every camper trailer there at some point.

If tackling the beach wasn’t enough, the campers were put through their paces on the inland track as well. There are more bumps on that track than pimples on a teenager’s face and, with everything from off-camber angles to soft sand ruts, you can just imagine the grins on everyone’s faces. And, just quietly, watching a few of the drivers’ knuckles turn white as they practically chewed holes in their seats was immensely entertaining, too!

While some of the campers were slugging it out in the tracks, the others were camped up beside an insanely picturesque lagoon, enjoying a nice cool breeze – no telling who drew the short straw out of that lot! But don’t worry; that cool breeze managed to spice things up a bit after getting a hold of an awning and flipping it up and over the top of the camper! A few guy ropes and sand pegs would have prevented that particular bump on the noggin’ but, hey, when the weather is that good and you’re in a spot like that, who could blame the guys for cutting a few corners, eh?

Meanwhile, over at Gallagher Point campground (another stunning location on Pumicestone Passage), all four of our judges were doing what they do best; poking, prodding and investigating each and every camper trailer they could get their mittens on. You’ve got to take your hats off to these guys, they sure know their way around a camper trailer and they definitely put the hard yards in when it comes to picking up on the finest of details. I think that’s what makes this event so unique. These judges are as credible as they come, with each one of them bringing a unique set of skills and experience to the team; that makes for some super interesting no-holds-barred feedback and overall ratings. I’d be lying if I said some of the manufacturers weren’t feeling the heat at this stage.

Speaking of the judges (and myself), it’s worth mentioning here that we spent the entire week driving around in a couple of Suzuki Jimnys. Now let’s just let that sink in for a bit. Can you imagine cramming 4 fully grown (and some overgrown) blokes into a Jimny? It’s a bit like being the genie in Aladdin’s lamp...except he had more space, and didn’t have to cuddle Bear Willis around every corner! All jokes aside, those little 4WDs are absolute weapons when it comes to beach driving. In fact, it’s just about impossible to get them bogged, despite Mr Everett’s best attempts. No work here for the VC recovery team!

The beach, driving and judging action was repeated for four of the five full days we spent on Bribie Island, with the middle Wednesday reserved for a public showcase of the camper trailers at the absolutely stunning Sandstone Point Hotel. The sun shone and the crowds came out to get a first-hand look at the best camper trailers and to meet the teams behind them.

So sit back, grab a coldie or a cuppa and enjoy!

The Stunt Man, a suspension freak, has freelanced for RV and 4WD magazines for five years. The self-declared ‘car tragic’ has rebuilt more trucks and rigs than his age in years and came to RV travel when he toured the US in a $1000 Craigslisted camper, which he gifted to a backpacker in Miami. He often travels the east coast with his young family between gigs and has spent time in Cape York and the High Country.

Cookie has been a keen camper for many years, undertaking a number of outback trips as well as more frequent local journeys from his home in Sydney each year. A qualified geologist, Cookie really knows how to read a track. He has combined an established career in magazine journalism and photography to become a regular contributor to Camper Trailer Australia magazine.

With a history in trailer manufacturing and boat building, Bear knows a few things about engineering and isn’t afraid to call it as he sees it. A returning judge for Camper Trailer of the Year, Bear is fond of creature comforts, and has little patience for poor design and intricate assembly procedures. Bear’s happiest when dangling a line in a mountain stream.

Stupot is a CTOTY institution who has been a judge at every event since its first running 7.5 years ago. Getting about in a Nissan Patrol, Stupot is a High Country fanatic who lives and breathes 4WDing and camping. As a magazine subscriptions manager, Stupot knows how to keep it real and has a long proud history with Camper Trailer Australia magazine.

Before setting off, we laid down 10 criteria by which we judged each camper trailer.

FIT FOR INTENDED PURPOSE - Judging campers can be like comparing apples and oranges, so judges were asked to consider how well each camper met the needs of its stated market.

INNOVATION - New features and options are highly regarded at Camper Trailer of the Year.

SELF-SUFFICIENCY - How long would the camper sustain you in the bush? Things like water and power capacity matter here.

QUALITY OF FINISH - The quality of the fittings, welds and stitching can be what makes a camper stand out from the crowd.

BUILD QUALITY AND CONSTRUCTION - The integrity, engineering and durability of a camper’s components, including canvas, matter here.

BUSH-ABILITY - How well the camper performs off the beaten path is an important factor.

SPECIFICATIONS AND COMFORT - The extras that add comfort to the bush are judged here, like the kitchen, bedding, power or hot water.

EASE OF USE - Is the camper quick to set up and easy to use? Smart and efficient layouts and short set ups times rate highly here.

VALUE FOR MONEY - Does this camper live up to its promise, and does it give buyers what they were paying for?

X-FACTOR - The hardest point to articulate, here, the judges decide if the camper just has that certain something that sets it apart from the others.