Tips for Packing Your Camper Trailer

Imagine a dog standing there wagging its tail. Now imagine, instead, that the tail is in control and it’s the dog wagging back and forth. Hilarious when the mental image is a slightly overweight Labrador, downright scary when the dog is a 4WD full of family and friends and the tail is your camper trailer trying its hardest to throw you into oncoming traffic. Ask me how I know...

While there’s no comparison to a decent camper trailer when it comes to comfort both sides of the black stump, the harsh reality is that they’re not as ‘set and forget’ as many people would like you to think. They introduce extra challenges both on and offroad and, just like your 4WD, setting them up incorrectly can have disastrous effects. You wouldn’t go and fit a 6in suspension lift to the front of your rig and keep a set of sagging standard springs in the rear, or hang a few hundred kilos off the rear bar with nothing up front and expect it to handle the same, would you? With only a single axle, your camper trailer is even more susceptible to load changes than your 4WD, so it’s vital to know not just how to load it to make easy access to the eggs, but how to do it in a way that’ll have it tracking straight and making life as easy as possible off and on the road. 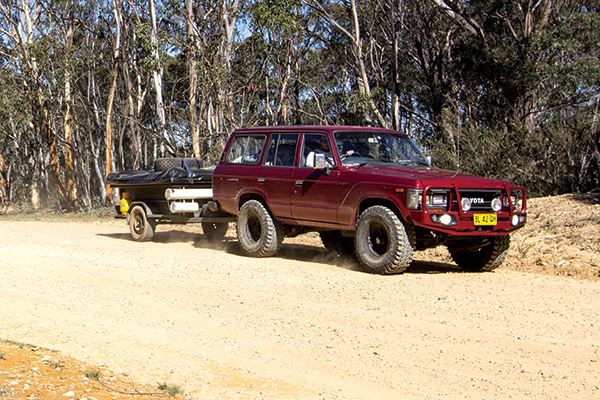 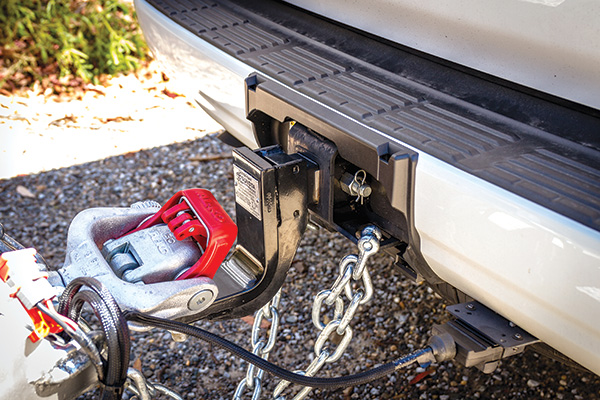 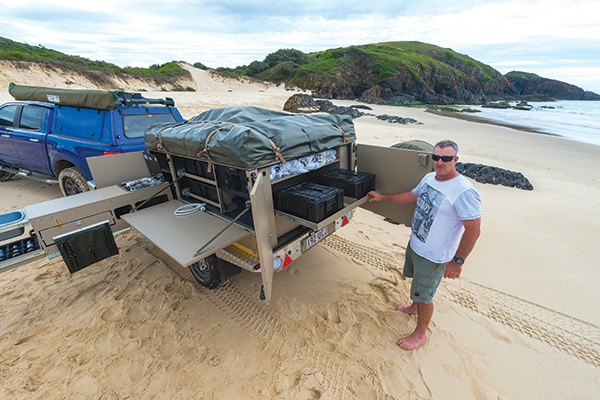 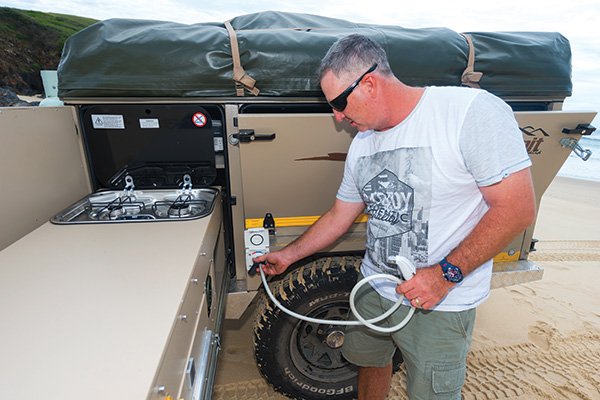 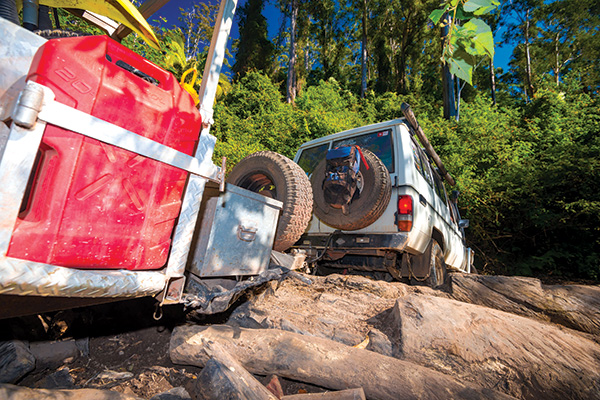 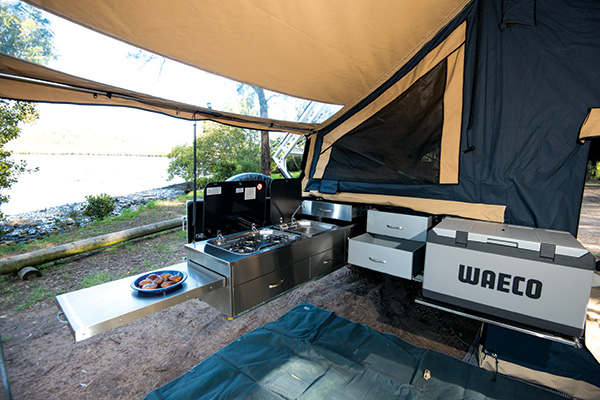 From here, you can plan around each item separately. You might find your trailer is well under its maximum weight, but is pushing too much weight down on the rear axle of your tow-rig, overloading the rear suspension, inducing poor handling and reducing front axle grip. Adding weight behind the rear of the axle in this situation would keep the trailer legal and remove towball mass getting you back under GVM. Not all weight is bad weight.

A PLACE FOR WEIGHT

The basics of loading a camper trailer are pretty straightforward. Push the weight forward and you’ll increase stability of the trailer but reduce your ability to turn and place load on your tow rig’s rear suspension. Push it to the rear and you’ll take weight off the rear of your tow rig’s suspension but will lose trailer stability in the process. While some towball weight is essential, it’s pretty obvious you’ll need to balance your weight front to rear. For some people, this means 100kg of weight at one end of the trailer for every 100kg of weight at the other end.

The end result is like trying to juggle a see-saw with a fat bloke on either end. It’s damn hard to keep things balanced and any movement is exaggerated and hard to get under control again. By having them both slide towards the pivot point (the axle) you’re able to carry the same amount of weight in a much more controlled way with more predictable behaviour.

Ever followed someone towing a camper trailer down a long and corrugated fire trail, only to watch their trailer pitch and yaw to the side on every bump? The reason is, more often than not, incorrect weight distribution. It’s all well and good to have your trailer’s weight sitting balanced front to rear but the side-to-side loading can drastically affect how your trailer reacts to corrugations and bumps. Put simply, by having the weight lop-sided, the suspension will react differently on each side. Hit a big enough bump and your trailer could shoot sideways and pull the rear of your tow rig with it.

But before you get out the tape measure and start stacking your pillows down the exact centre line of your trailer, it’s not as vital as the front to back distribution. In fact, with all the various accessories spread throughout a trailer it’s almost impossible to get things perfectly weighted. But what it does mean is that you should take a few things into consideration. If, on one side of your trailer, you’ve got a spare tyre, a fridge, two batteries and a jerry can or two of fuel, it might be worth shuffling a few things around to try and even it up.

Optimist or pessimist, the glass isn’t always going to be half full or empty, especially when the glass is a 200L water tank you’re drinking out of every night. If you hit the road for a day trip with your trailer fully loaded and never open it, chances are it’ll have the same weight distribution by the end of the trip as it did at the start. In the real world, that big water tank behind the rear axle will slowly push more weight down on to the towball as it empties, affecting how the trailer tows and how much load is on your tow rig’s suspension.

Most manufacturers try their hardest to keep the weight from bulky units like this close to the axle and down as low as possible to minimise the load changes, but not all trailers are built evenly. If your tank is right at the very rear of your trailer, a 200L water tank being emptied could easily add 50kg to your towball weight, despite reducing the overall weight of the trailer.

It’s easy to get caught up worrying about where you should stack your eggs and if that thicker quilt is going to overload your suspension, but there are bigger fish to fry. Throughout your trailer, you’ll have a heap of things adding weight that might not need to be exactly where they are. In some cases, they might not need to be there at all. Got a trailer with too much ball weight and looking to shift the weight rearwards? Rather than doing the juggling act of trying to fit every piece of kit you own in one of the rear storage boxes, why not look at the gear on the front and reconsider its usefulness. If you have twin water tanks and only ever use one, consider ditching the front one to reduce overall weight as well as towball mass.

Your trailer may legally be able to carry an ungodly amount of weight and I’m sure the salesman didn’t hesitate in telling you this. What they might have forgotten to mention was that weight is only really suitable on the blacktop. The stresses and wild movements seen in offroad situations can drastically compound weights that’d normally be safe on-road resulting in serious damage to your tow rig and trailer and an extensive repair bill when you get towed back into town. Think of the difference between placing a plate on the ground, and throwing it down and you’ll be on the right track. Isn’t it funny that spate of dual-cab utes all bent cresting sand dunes and not driving to the shops? Food for thought.

It’s easy to talk in absolutes and say you should do this and shouldn’t do that. But, in the real world, a lot of it isn’t practical. At the end of the day, we’re not heading off to race in the Baja 1000 with a fully laden camper behind us. In some cases, getting the maximum performance from your trailer isn’t worth making it an unbearable nightmare to camp out of. In an ideal world, you’d have a perfectly balanced camper trailer that tracks straight and handles well, but it’s not always possible.

If shifting weight forward or backwards to make a two per cent change in the way your trailer handles makes things so complicated to setup you’d rather stay home, then you’ve had a massive step backwards. After all, the whole point of optimising a setup is to allow you to spend more time out in the thick of it with as little stress as possible.