Once in a blue moon, the life of a journalist can get very interesting. Actually, if you ask my wife, she’ll tell you there must be a lot of blue moons around here. She thinks my life is one of perpetual enjoyment and endless travel.

Which makes it really hard to kid her that things like my recent trip to South Africa are actually work at all. But it was work. Sort of. Maybe a little teensy bit of fun as well. Okay, maybe heaps of fun. I’ll stop at the airport on the way home and buy her a nice souvenir box of chocolates or something to atone for my sins.

The occasion was an invitation by South African company Front Runner to come over to Africa and test some of its products. Front Runner is the premium manufacturer of vehicle accessories like roof racks, water tanks, tents, awnings, drawer systems and camping accessories on that continent and is exceptionally well regarded for its advanced but lightweight designs built tough to handle a hard country. In fact, it doesn’t really have any competition on that side of the world and has been making big in-roads (maybe that should be ‘in-tracks’) into the rest of the world in recent years. 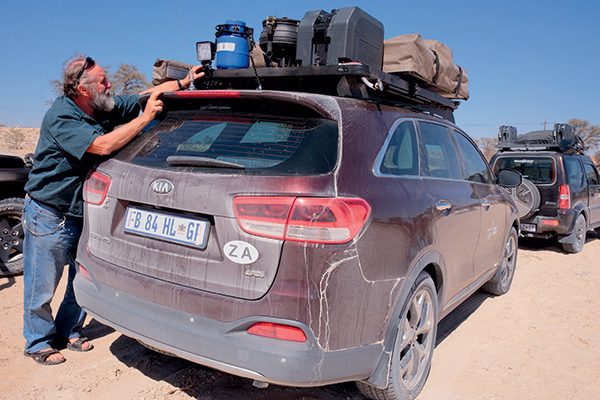 But here in Australia, while the brand is well represented, it’s not as well-known, Hence, a couple of seats on this testing gig were reserved for Aussies and I was one of the lucky ones chosen. The other was Gordon Shaw from offroad company Opposite Lock who, like me, has had a lifetime fitting, testing and proving products for extreme use.

Gordon’s a great bloke. Originally from Glasgow, Scotland and still in possession of a solid Scot’s accent, he’s also got a great sense of humour. The two of us on the loose among our more serious African cousins was an absolute riot. Well, it was for us, I’m not so sure about our hosts...

I am sure about the products, though, having first toured the factory with the owner himself, Stan Illman. It’s a family business and one of Stan’s daughters, Rene, manages the Johannesburg plant and another daughter Tina distributes Front Runner in the USA.

Stan had a background in manufacturing but offroad racing and overlanding were his first loves. In fact, he won the infamous ‘Roof of SAfrica’ race a couple of times and looking through his photo album is like taking a trip around the remote areas of the world.

This experience and an extraordinary ability to develop cutting edge manufacturing techniques led to Stan buying the fledgling Front Runner company and completely overhaul every facet of it.

The combined racing and rough track touring experience led to the development of ultra lightweight but strong modular roof racks engineered out of aluminium. Using that platform - one you can walk on without shoes - Front Runner has engineered some 30 or more accessories to do everything from hold water tanks to shovels to axes to bicycles to kayaks to - well, you name it, they’ve got it ready to bolt on and hold secure.

Any sensible traveller knows that keeping weight down up top is critical. That’s where Front Runner excels, that and sheer strength. But to prove the point, we set off with a bunch of soft roaders and lightweights vehicles to tackle the infamous Kalahari Desert tracks instead of in a fleet of heavy 4WDs. Yep, there was a Suzuki Jimny, a shorty Pajero, a Kia Sorrento and a TJ Jeep. Only the Jeep had any offroad pretensions with suspension, tyres and a winch but the others were straight off the showroom floor, apart from their roof racks and other Front Runner gear like water tanks. Pretty soft tackle to take on a part of the world that eats Land Rovers and Cruisers.

But that was the whole point. By using ‘soft’ vehicles, Front Runner’s Jaco Nell explained we could see how useful the products were in the real world. With seven of us hitting the bush for 10 days and carrying everything required for a full out of town safari, we’d have been totally stuffed without the racks and mounts! And, predictably, they were loaded up severely, too.

Stan Illman’s passion for adventure soon came through when he saw the last minute preparations and decided he’d better come along for the ride, too! So, putting aside a bunch of business meetings, he chucked a bag into the Mercedes G-Wagon he keeps ready to hit the bush at all times and came along for the first days of our trip.

Which gave me a chance to experience the mighty Gerlande wagon first hand. I guess the overwhelming thing was that, yes, it’s brilliantly engineered as you’d expect from a German built truck. But given the price is about twice that of a 76 Series Land Cruiser and it’s not exactly loaded with features, I can see why it hasn’t made much of a dent in the outback market here. More on that later.

How did we go? Ha, you don’t expect me to put in 20 hours on a plane and give it all up in one yarn do you? Hang in there; next issue I’ll get down to the nitty gritty. That’s if Gordon hasn’t drunk it all, anyway.

So if you’re looking at adding a few things to your own adventure chariot, I reckon there’ll be a few tips coming up. There’s nothing like thousands of kilometres of rough corrugated dirt tracks to test product.