When you wake up the morning after setting up camp, do you find that everyone else has moved 50m away? Do other campsite inhabitants scowl at you? Throw things? Do latecomers spot a nice big empty area, set up camp – and the next morning, a whole new group of people hate you, too?

Assuming it has nothing to do with curried eggs or cheap red wine, could it be your snoring? We’ve all heard the chainsaw-locomotive-ocean-going supertanker in the next camper, and the standard response: “I don’t snore, but you should hear the missus!”

Remember the bastard next door that you’re sure could snore underwater?  Snore for the nation at the Olympics? With a resonating, grumbling up-stroke with a rip-saw crescendo, followed by the wheezing, rattling downstroke with added snuffling. No wonder the next morning, most people pack up their gear and move as far away as possible. In the still of night, sound travels. 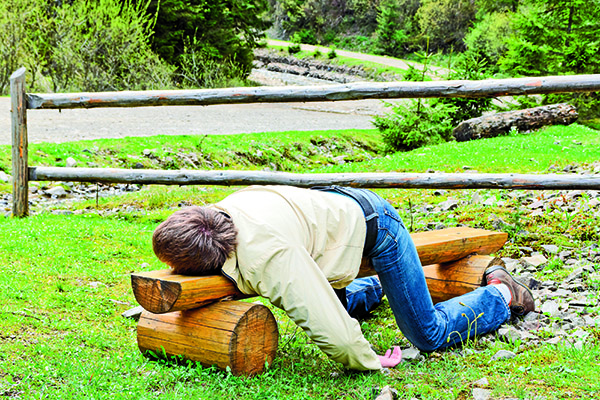 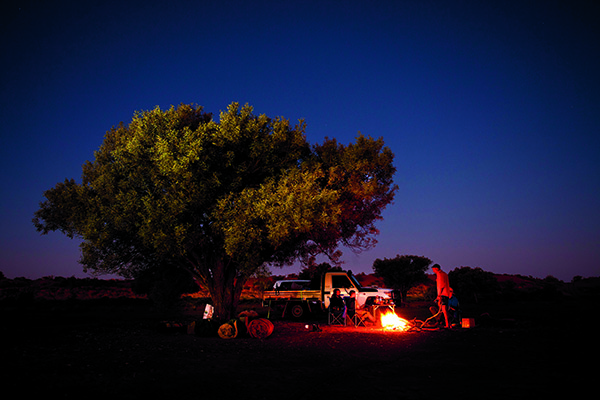 The good news is that even for extended trips deep into the bush, there’s a cure for the negative vibes and negative campsite karma.

Gargling cheap wine around the campfire will make snoring worse; so does smoking and being wide across the axles but what many people don’t know is that snoring can also kill you. Actually, snoring won’t kill you (though your new sleep-deprived enemies might) what’ll give you a heart attack – or a stroke – is the snuffling, snorting noise you make in between snores.

Unless you’ve been living under a rock, you’ll at least have heard of sleep apnoea. It’s Greek and means ‘without breath’, and that’s exactly what the snuffling, snorting noise is: it comes after you stop breathing while asleep and you wake up to do so.

The physics of what’s happening here is that while you’re asleep, your muscles relax, and being overweight (or simply built with a narrow airway – some skinny folk snore too), your airway collapses, so you don’t get any air.

In mechanical terms, imagine that while an engine’s idling, the air-intake’s suddenly shut. The human body, being the clever machine it is, wakes you up momentarily so you can breathe again, at which time may cause you to make that snorting noise. Generally, you won’t be aware of waking up but may be aware that you sleep restlessly.

If it’s any consolation, you’re not alone: about 60 per cent of people over the age of 40 snore and 34 per cent of men and 17 per cent of women have some degree of apnoea, but less than 10 per cent of them are doing anything about it.

Often, it’s bed-partners who report hearing the rhythmic snoring, then a period of between 10 to 30 seconds of silence, followed by a restless snort as the sleeper semi-wakes to start breathing again. This can happen dozens of times an hour – you never get properly asleep and don’t get that deep restful shuteye that your body needs. You become chronically sleep-deprived; there’s a reason why sleep deprivation is a form of torture and why Special Forces soldiers practice long stints of wakefulness.

Hopefully, if this describes you or your partner, you will be aware of your condition and will be doing something about it. If not, here are some sobering thoughts: according to sleep scientists such as Liz Kealy, owner of Victorian company SleepMatters, people with untreated sleep apnoea are up to five times more likely to suffer a heart attack, seven times more likely to suffer a stroke, are much more likely to suffer depression, offer low work performance, make poor decisions and are also prone to falling asleep at red lights in traffic, or uncontrollable micro-sleeps while driving. Scary.

Statistically, people with chronic untreated apnoea can also die up to 20 years earlier. The severity of apnoea suffered can vary according to factors like diet and the physiology of an individual’s facial structures.

Yet, according to Kealy, a sleep scientist with 30 years’ experience in sleep, covering clinical research, diagnostic R&D and treatment of people with disordered sleep, treatment is readily available and can take many forms.

“Most people snore worst when sleeping on their backs,” she said, “so preventing the snorer from doing so will often stop the apnoeas. This can be as simple as a tennis ball inside a sock safety-pinned onto the back of your pjs. Anything to stay off your back.”

According to Kealy, “If that doesn’t work, a form of mouthguard might.”

For some people, holding the lower jaw from falling back and giving that attractive slack-jawed look will keep the airway open enough that apnoeas don’t occur, allowing the sufferer – and their partner – to sleep through the night.

The technical term for a snore-stopping mouthguard is a mandibular advancement splint (MAS). The good ones are personalised, made by specialist dentists and cost about the same as the more common treatment option, a CPAP. MAS devices are light, easily transported, don’t need power and only really suitable for people with fairly mild apnoea.

For the vast majority of apnoea sufferers, a continuous positive airway pressure (CPAP) will become their life-long, life-saving, bed-buddy.

Originally invented in Sydney, CPAPs are now extremely quiet, sophisticated, come in many sizes and shapes and are used by tens of millions of people around the world; think of it as a silent bedside fan, gently blowing air which makes a sort of pneumatic splint to hold open a floppy air-intake; there’s a filter and some clever computer code that adjusts the pressure to what suits each person best.

The downside is that you’ll need a mask to suit your face, connected to a hose. It’s more of a passion-killer than army-issue undies.

So much for sleeping at home – but what about when you’re in that lonely campsite, surrounded by grumpy people treating you like a Pommy Prince at a haka?

The happy news is that there’s a now very small CPAP that suits the camping lifestyle perfectly.

“The Transcend CPAP is barely bigger than a can of Coke, runs on a rechargeable battery and lasts through the night before needing a recharge,” Kealy said.

“It can be charged up during the day from a 12V power socket, or even by a solar panel – and of course it runs on mains power too. It can also run directly off the car’s power socket.”

The Transcend is lower priced than the most common CPAPs. It’s not the cheapest, but it’s well off the cost – and size – of a flash-Harry automatic machine. Expect to pay about $800 without accessories.

“Some people think they can order a medical device like this – or the mouthguard over the internet and expect it to work perfectly,” Kealy said.

“They’re sadly mistaken. In reality, the machines and the masks really do need to be set up by an expert for each individual case and face to achieve the best results.”

She’s had some patients who think they can do better buying online.

“Many of them come in to get their foreign-sourced machines set up to their prescription, only to find no-one in Australia will touch it. If it’s a grey import, we may not have the software to do so and anyway, Therapeutic Goods Authority (TGA) rules forbid the import of unapproved medical equipment.”

Just like in the offroad touring world, specialist knowledge, expertise and personal attention based on years of experience and specialist training is worth paying for.