A fierce office debate began the day that the Fornetto 18" Midnight Black Razzo Vertical Smoker arrived. But in the end it fell to me to set aside a lazy Sunday afternoon to assemble, stoke and smoke – just for you.

Setting it up is fairly straightforward though there is some assembly required.

We made a quick trip to Bunnings for quality charcoal (pro-tip, avoid cheap and often nasty options) and some smoking chunks. The 18” asks for wood chunks, not pellets or sawdust. We chose oak wine barrel chunks that carried that enticing oak scent with a hint of shiraz. 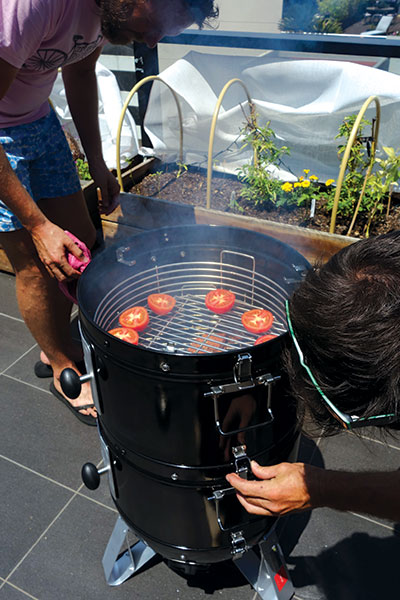 In the name of science and my overeating disorder, we had a few cuts of duck and chicken supreme as well a range of veggies and a rack of pork ribs.

You light the 18” is as you would any charcoal BBQ – which the bottom section doubles as. I find it best to use a charcoal lighter, a metallic jug with air vents to get coals started faster and more thoroughly. Once developing a nice white powdery outer, in they went with a thick layer of dry wood chunks. With the first centre on, in goes the water bath, topped up to near full. Above goes the final middle section with racks internally. We added all racks with ribs at the bottom and truss tomatoes, red peppers and an onion above. The lid is heavy, which tells me it should have good thermal properties and includes a thermometer and hanging points for meat hooks.

With all vents open fully and only five minutes later the dial was comfortable at 100C. The water bath lowers and maintain the temp for a nice slow smoke session. After a few more minutes we played with the top and bottom vents to see if we could manipulate the temp. We couldn’t, a good sign for the effectiveness of the bath, so we set the top vents to fully closed and lower to one-third open.

After two hours we popped the top – all looked good so we removed the bath, cranked the heat and got the birds ready for lunch. Without the bath the temp flew up and in no time we were ready to eat.

Easily some of the best duck I’ve had and probably the best I’ve made. The tomatoes and peppers were a winner too being blended into a killer bolognese sauce. Clean-up was easy. With the centre sections removed, we closed all vents and left the remaining coals to choke out.

It is too big and heavy to use as a travel smoker but, as it doubles as a decent sized BBQ and can take two racks and hung meats for smoking, it can cater for a dozen people making it a pretty decent buy.

Where: Most leading BBQ supplies stores

The full product test appeared in Caravan World #573. Subscribe today for the latest caravan reviews and news every month!