When you read a review of a camper in CTA, it's almost always a short term view of the product. This is a result of the industry’s limitations and short deadlines. As a reviewer, we usually get a camper for a couple of days or a week. We get to take it out and go camping for a day or two, put it up and down two or three times and tow it over a couple of hundred kilometres of mostly asphalt roads, and whatever dirt tracks we can pack into, at the time.

That may not seem a suitable basis for a review which could form the core of someone’s decision to part with $20-50,000, but the reality of the industry is that’s the best that can be managed. As reviewers, we have deadlines — often tight — in which to undertake the testing and write it up. The campers are generally the units which the manufacturer or importer hauls around to the various shows and which they also loan out to other reviewers, so our opportunities to get our hands on them are usually limited by those factors.

Superficially, a camper can look fine, and we may find little wrong with it, only to have someone a couple of years down the line complaining that they bought one and this or that went wrong — so why hadn’t we picked that up and told the readers? 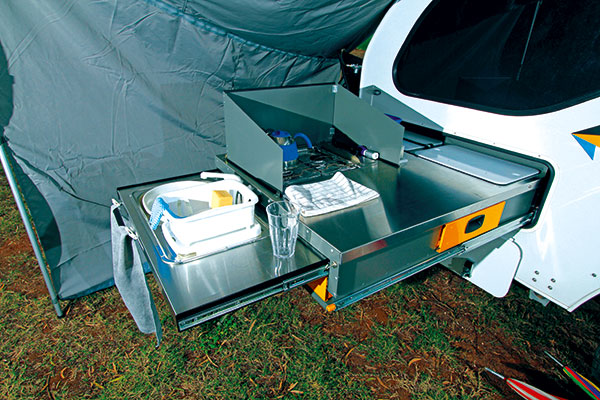 The simple fact is that you need to live with and use a camper for a long time to find out just how good it really is or isn’t. Often problems don’t become apparent until a year or two of use. You need the camper out in heavy rain, you need to be erecting it and pulling it down in strong wind, to be hauling it up steep narrow tracks, backing it into tight camping spots, have a couple of kids bouncing around in it, setting it up and packing it away every night on a long series of transport stages as you head across country. Only through such a long cross section of use can you fully judge a camper’s worth.

Some of this can be divined from a reviewer’s experience, such as noting a peculiarity of assembly or function that you have seen before, and that you know would drive you nuts if you had to deal with it on a regular daily basis, or when under pressure to get camp established as a soaking rain falls and the kids are running amok in the mud. You have to be able to look past the glitz and the shiny bits to see the true bones of the camper.

That’s why the editor suggested a look at my own camper — a Vista Crossover XL — which I bought two years ago. It was acquired new, paid for at full retail price and there were no obligations to either can it or praise it. It seemed a unique opportunity.

The Vista RV line of campers has been on the market since 2006, evolving into a sophisticated and well-engineered hybrid. When I became aware that I would be needing to buy a new camper, about four years ago, I went through an exhaustive selection process (see my article in CTA #105 detailing this) which resulted in my wife and myself negotiating to buy a Vista, which we picked up from the company’s Bayswater, Vic factory in March 2016.

Since then, we have racked up over 25,000km of travelling with the Vista, ranging from long distance runs along the highway to corrugated and dusty tracks to bush campsites, up steep climbs and through water crossings. It has survived a mini tornado and drenching rain that blew the awning off a nearby highly-rated camper; near zero winter nights and baking 40-plus degree summer days. So after all that, what’s my opinion?

We have found the Vista to be all we expected when we picked it up. Like almost all campers, there were a few minor adjustments that needed to be made. The latches on the kitchen slides needed trimming to ensure they locked out. The siphon function on the hot water system, which allows it to draw water from an external source, didn’t want to suck water. This was traced in a matter of seconds by one of Vista’s workers to a piece of piping in a John Guest fitting which had bowed inwards and was allowing it to draw air instead. When we used the powered kitchen tap, water dripped from the external hand pump, which was solved by fitting a one-way valve into the line to the tap.

These were all relatively minor issues. We accepted that all camper trailers are hand built. They aren’t the product of Mr Toyota where they are produced in their thousands on a fancy production line by multi-million dollar robots. Small issues are more to be expected than the exception.

What really counts is how such issues are dealt with, and to our joy, Vista has been excellent.

As the camper was built in Victoria, it came with Victorian registration. After we got home to Sydney we had three months to swap it over to NSW registration. This process involved having an inspection to ensure it complied with local regulations. The day before this was due to be done, my wife Jan, suggested we give the camper the once over to ensure it would meet requirements. Somewhat reluctantly — since we tested such things as tail lights, blinkers and brake lights every time we hooked up — I gave it a run through, to discover we had no tail lights. I soon found the fuse in the car had gone, so inserted another, which promptly blew when I plugged the trailer in.

Obviously there was a problem in the camper.

I spent all afternoon trying to find the problem but without luck, and so cancelled the next day’s registration check and booked the camper in with a local auto electrician. Later that afternoon, I got a phone call to say they’d found the problem: One strand of wire which had poked out sideways at the back of the second last of five wires, which plug into the Redarc battery management system, had been mounted under the cupboards inside. The Redarc unit requires a wire to run one part of the electrical system which plugs into the seven-pin plug, so that the system knows when the ignition has been switched on. However, it had been wired into the tail light unit on that corner of the camper. That one strand of copper wire — only picked up after nearly three hours of searching by the auto electrician via a dental mirror and a torch — was shorting out on an adjacent wire.

The bill was over $250. I made a phone call to Vista and the matter was taken care of on the spot, by them. That’s the service you want.

There have been a number of minor changes we have made to the Crossover’s set-up, mostly with things we have learned about the way we live with it. We put hooks on the back of the bulkhead, just inside the door, as that’s where Jan likes to hang her handbag, out of sight, and a torch if she needs to get up in the night. I had a set of pockets made for the inside of the wardrobe door as a store for small things, including keys and wallet, where they’re out of sight. I took out two of the elasticised pockets just inside the door, which I found too restrictive, and replaced them with a set of six more useful smaller pockets made from heavy duty fly mesh on a grey vinyl backing.

These are things that you learn about a camper as you go. They’re not essentials, but they do enhance its functionality and suit the way we like to live with it. This is no criticism of the manufacturer, because when we picked the camper up we had no idea that they might one day be desirable.

And the Crossover, like all good campers, continues to evolve in the factory. Already, it has changed quite a bit since we collected ours — the chopping board covers over the storage tubs in the kitchen have been replaced by tilt-up lids, there is a choice of cabinetry colours internally, the sail awning shape has been modified and so on — and several of our own changes and ideas have been incorporated into the Vista options list.

In a practical sense, we have found the Crossover to be an excellent camper. Just after picking the camper up, we were towing it along somewhere and Jan suddenly said, “There’s something wrong with the Crossover”. I glanced in the rear vision mirror, expecting to see something out of the ordinary, but all looked okay to me. “What is it?” I asked. “It’s just sitting there,” she replied, “it’s not moving around. Our old camper used to bounce around a bit, like the car”.

The point is, that the Crossover’s suspension has 330mm of travel, and is soft and supple. It hardly seems to move and the camper just sits behind you, on even the roughest roads. This reduces stress on tyres as well as the camper and its contents. I love it.

The specs are good. The Tare weight is 1230kg, but that’s with one battery and one water tank and none of the options. Optioned up, expect it to weigh more like 1350kg, but still way less than many forward fold designs. And it’s a lot less than most or any other hybrid campers with that level of fitout. There is a heap of storage and a great load capacity.

Are there any weak links? When we bought ours, two years ago, I’d have to say that the fridge — an 80 litre upright Waeco — was a little less than optimal. It struggled to cope with extremes of temperature and consumed electricity like there were no limits. We have since optimised our fridge with a number of minor adjustments, but the latest editions of the Crossover include a newer version of the 80L Waeco which is rated to more extreme temperatures and is reportedly much more efficient with the batteries.

And I find the method of swapping from one tank to the other — which requires me to lie down on the ground to reach the taps — is awkward and inconvenient. But I’m about to fix that.

Has it been a worthwhile investment? The answer: Absolutely. This is a camper with tough credentials, essentially aircraft quality engineering, a load of comforts and a go-anywhere persona that will open up all manner of locations. Every night when I get into the camper’s bed, I look around and feel a buzz of satisfaction. Every time I walk out of the house and see it sitting there, it gives me a little charge of pleasure.

When we picked up the camper from Vista, they gave us a handful of leaflets. When we asked why, they said we’d find out. We went off to the Grampians to test run everything and by the time we got back to the factory a week later, we had to top up the pile. We’ve topped it up twice more since then. Wherever you go you have people approaching you, asking questions about it. I’ve even had people walking past approach me in the front yard.

The Vista Crossover was our first purchase of a new camper, direct from the manufacturer. It has taught me the importance of thinking about what you want and walking through every step of how you will use the features. If possible, look for a manufacturer who is happy to build you the camper that you want, not one that just comes off a production line and is essentially the same as every other camper they’ve sold. That’s how you can get the closest to the camper that’s right for you.