If you own a camper trailer you’ve probably faced a common dilemma: Your trailer’s on tow and you’ve hit a track you’d like to check out but it looks unsuitable for towing. What do you do? Camp up somewhere and leave the trailer behind, or just think it’s all too hard and keep on driving?

You might have thoughts of crossing the Simpson Desert as part of a larger Outback trip. If encumbered with a camper, would you be prepared to park it up at, say, Mount Dare while you drive to Birdsville only to face a return trip over those 1000-odd sand dunes? Probably not. It’s in these situations that a Tailgate Camper comes into its own.

Several years ago, Noel and Irene Ham had trouble finding comfortable offroad accommodation that would enable their continued participation in 4WD club trips. Camper trailers didn’t work for them given the challenging tracks they often travelled. Roof-top tents were dismissed as too much hassle if they needed to pack-up camp for a quick run into town for provisions. Noel felt a slide-on camper was the answer and he set about designing one that met his requirements. That initial design proved so successful it led to the creation of the Tailgate Camper business. 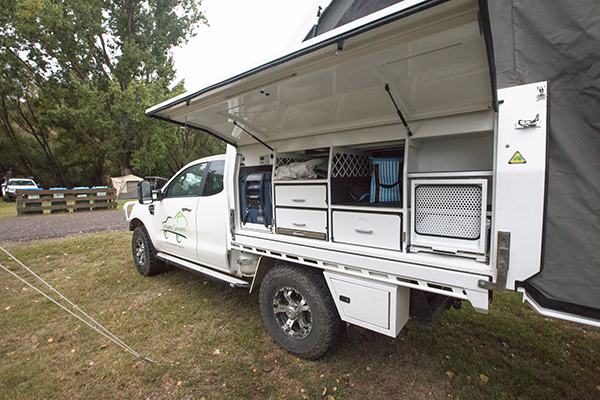 Each camper is individually hand-crafted in the Ham’s workshop to fit their customer’s specific vehicle. Noel admits that while there is scope to materially grow the business, he’s happy to keep production at its current level for the time being to ensure the maximum quality control of the end product.

Most of the Tailgate owners we spoke to were seasoned travellers who had past experience with vans and trailers, and all had only good things to say about their change to a Tailgate camper. Questioned about the difficulty of fitting/removing the camper when not in use, the consensus was that it was an easy 10-minute job for one person

The camper is unbelievably quick to set up, taking under 40-seconds. A couple of latches on the back allow the roof to fold out with one-handed effort. Two internal struts hold the canvas in place and a quick release catch lets down a set of steps for access. Noel has cleverly incorporated insulation into the roof design to overcome the issue of canvas quickly heating up when in the sun and the camper’s full length gull-wing doors that open-up the kitchen and storage compartments double as protection from the elements for that quick roadside stop.

The camper shell, with an aluminium tray weighing in at around 500kg, for example, takes a Ford Ranger single cab’s published kerb weight to around 2300kg. In comparison a Landcruiser GXL wagon tips the scales at 2740kg with a GVM of 3350kg (against the Ranger’s GVM of 3200kg). Noel always suggests a GVM upgrade to his customers, because by the time you add all the seemingly endless paraphernalia needed for extended touring (fridges, gas bottles, bull bars, long-range tanks, winches and the rest of it) the standard GVM is probably going to be challenged. And, to be fair, a similarly loaded Landcruiser is going to face exactly the same issue.

Tailgate Campers come in a range of configurations for single, extra and dual cab vehicles. While the longer tray of a single cab enables fitting a more spacious slide-on with more storage space, the gain is minimal when compared with the extra cab model. In fact Noel suggests fitting the shorter extra cab unit to a single cab vehicle to create additional storage space behind the cabin for a pod or spare tyre. While some concessions in space have to be made with the shorter slide-ons, the extra cab still features a full size queen mattress. In standard trim the dual cab bed is queen width and double length, although it can be optionally extended.

We caught up with Noel and Irene on a Tailgate Camper trip they had organised for several of their customers as part of the annual High Country & Beyond event conducted by the Wangaratta 4WD Club. Based at the delightful Omeo caravan park in Victoria’s north-east, the event attracted owners from Queensland, South Australia, New South Wales and Victoria.

From Omeo, we headed out past Benambra, stopping for a quick history lesson at the ruins of a home built by James Pendergast. One of the very first cattlemen to settle here in the 1830s, Pendergast built his homestead in the shadow of McFarlanes Lookout, a craggy granite outcrop popular with rock climbers, which dominates the skyline.

Moving further east, the group diverted down the 4WD dry-weather-only Limestone Creek track for morning tea. Rough and rocky in places, the track descends steeply for 2kms from the main road until it reaches Limestone camp-ground. This large grassy clearing is bounded on its western side by a rocky ridge that hides an extensive cave system able to be explored by the more adventurous.

Back on Limestone Black Mountain road, the convoy headed towards McKillops Bridge on good all-weather gravel roads and some bitumen. While the driving wasn’t challenging it provided everyone with the opportunity of taking in the scenery—made all the more pleasant by the warm autumn weather.

Where McKillop road crosses Little River, we turned up a rough, rocky 4WD track that runs 4kms to Hanging Rock. With numerous high erosion embankments challenging clearance and tight corners, this was not a place you would necessarily want to bring a trailer, but the Tailgate Campers took it all in their stride. Arriving at a small clearing at the end of the track, there was a bit of a view over the ranges to the west but if this was Hanging Rock the group was unanimous that it probably wasn’t worth the effort. However, we found what initially looked like an indistinct brumby trail that led a short distance into the thick bush only to open out onto a rocky outcrop with breathtaking views off either side of the narrow ridge.

Leaving Hanging Rock behind us, we followed nearby World End track to a helipad for more expansive views before descending back down the aptly named Rocky Range track to McKillops road. This gravel road, barely wide enough for two vehicles, twists and turns as it hugs the contours of the rugged, steep range. With nothing but fresh air off the side, you try not to think of the consequences of meeting a truck (or anything really) on one of the numerous blind corners. That said, the views over the Snowy River valley are awesome.

Nearing McKillops bridge we surprised one of the local denizens - a large Lace Monitor sunning itself in the middle of the road. The lizard’s distinct blue face and yellow markings weren’t something we had seen before but subsequent enquiries confirmed the reptile’s colouring wasn’t uncommon at certain times of the year.

McKillops bridge camp-ground proved to be a rocky and uninviting experience where level sites were hard to come by, but for an overnight stay it at least offered basic facilities. The nearby 255-metre timber-decked bridge, perched high above the Snowy River, is visually impressive and has a history to match. Commenced in 1931, it was washed away by record floods in 1934 just before it was due to be opened. Rebuilt using arc welding, which was leading edge technology at that time, McKillops bridge was then the longest arc-welded steel truss bridge in the world, regarded in Europe and America as an engineering wonder.

In summary, there’s not a lot to dislike about the Tailgate Camper. Designed and constructed by someone with many years of offroad touring experience, there’s not an inch of wasted space. Sure the living space is small and you’ll be flat out cooking a Sunday roast with all the trimmings on the small gas stove, but considering the limitations imposed by the necessity to fit everything within the available space, they are more than adequate for purpose. Storing large items, like an extra spare-wheel, is problematic but the option of fitting an extra cab shell to a single cab vehicle does provide additional storage space behind the cabin. The access steps to the camper fold onto the rear of the unit when not in use and are held in place by a quick-release catch that proved neither quick nor easy to release. In fairness, this was a brand-new unit and the release may have just needed a simple adjustment. Anyone unsteady on their feet or with mobility issues could also find the standard access steps somewhat challenging, despite the vertical handrail provided. The metal treads can become slippery when wet and some form of non-slip surface is needed.

These minor issues aside, Tailgate Campers do go places you would never take a traditional camper and their exceptional design makes set-up a breeze. So if you already own a cab chassis, or are toying with the idea of buying a new 4WD for some remote travelling, then it may be worth checking out what a Tailgate Camper can offer.