Spend enough time in the off-road industry and one thing becomes abundantly clear above all else. It’s full of bloody great people. Now I don’t mean great people like they’d spot you a dollar if you asked for it. More like kick off a campfire and you’ve got a friend for life kind of people. For those who were lucky enough to meet him, Steve Robson from MDC was exactly that kind of person. While my own experiences with him should probably never be put into print or repeated among polite company, he left a lasting impression with everyone who crossed his path. Sadly, he unexpectedly passed away recently, and as a huge family man with a love for the outdoors the good folk at MDC knew just the way to pay tribute to part of their own family.

With a troop of six kids and a love for the outdoors, the new Robson XTT is the exact kind of camper Steve would have loved, and it’s immediately obvious the rest of the MDC crew have put their hearts and souls into the twin-fold beast. With room to sleep six, a huge living space and an affordable price, the Robson XTT promises to be the perfect camper for families large and small. On a recent weekend, we were able to grab a pre-production version and punt it through tracks a camper of this size has no business travelling. Is it up to the task at hand? You’ll have to read on to find out. 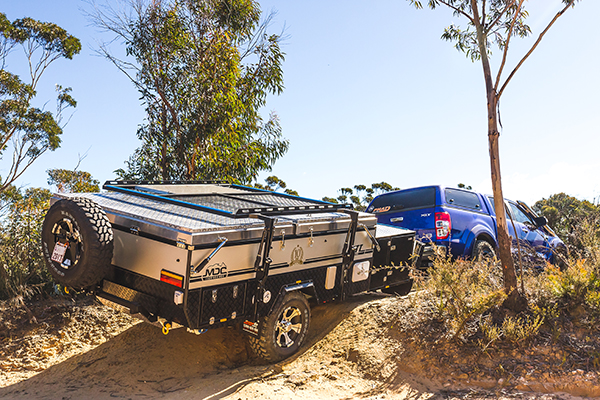 You’ll rarely find a style of camper that’s fundamentally flawed beyond appeal. One man’s perfect camper is another woman’s weekend from hell. The huge lounge that appeals to some families will be a ground anchor to those who go a little more extreme off-road. That said, there are some unavoidable setbacks, depending on the style you choose. The downside of the cavernous footprint of a double-fold camper is often a weight to match. We’ve punted plenty of double-fold campers lots of places we’ll never admit to the manufacturers, and the one constant struggle has always been weight. In many cases just a hundred or so kilos short of 2T holding us back. With every kilo costing you more fuel and decreasing your off-road ability, it’s a delicate juggling act to get a camper that’s going to serve you off-road, and around camp.

On this front, MDC has put their thinking caps on and gone down a path that’ll hopefully be far more common in years to come. Rather than a bulky steel frame and body the Robson XTT is sporting an internal aluminium frame wrapped in extensive composite panelling. Despite opening up with a footprint that’d easily swallow a three-ring circus (elephants included) the Robson XTT only weighs in at 1570kg, unloaded. For comparison’s sake, that’s lighter than many single-fold options on the market, with far more usable space, and far less chance of corrosion eating into your investment. It’s a clever manufacturing change that makes the XTT significantly easier to tow, both on and off-road, and should excite more than a few beach camping aficionados.

Let’s not skirt around the obvious here. The XTT is huge, like I had to scare away a few tourists-trying-to take-photos-of-it huge. And that normally doesn’t gel well with quick set-up times. But MDC isn’t a normal company, and their staff rack up more kays on their own R&D trips than most, so cumbersome set-ups weren’t going to cut it.

While the boat rack is easily removable, it was fitted to our tester unit, so after dropping the four stabiliser legs down into place it was our first port of call. Hoisting it up and out of the way is a simple affair: open the over-centre latches and sling it up. It’s heavily assisted by gas struts making it an easy up, even with weight loaded on—although it does make it a little difficult to get it back down into place. That said, if you’re not storing gear up there there’s not much point leaving it on anyway. Once it’s pushed back and auto-locked into place, both beds can be slung over. A couple of quick stabiliser legs pop in under the rear-most bed to take the weight then three poles over each end get adjusted out. A centre pole also pops up into place, which gives huge amounts of headroom. While it sounds like a complicated process, it’s reasonably straight-forward and set up from scratch in around five minutes.  If you’re fancy (I’m not) it also comes with a full awning and a shower tent that will add around ten minutes to the set-up time. Not exactly paint by numbers, but considering it’d be worth a million bucks if it were parked in Sydney, it’s not bad.

Like most hard-floors in MDC's range, the included lounge area can also be converted into a double-bed for a total of three sleeping options in the XTT, which gives it the six-berth rating. Twelve if you’re into putting your keys into a bowl at the start of a party. At 6ft tall I was able to lay comfortably along the width of the trailer, but if you earn a living as a stunt double for the Incredible Hulk, you might find things a little cramped. Due to the extra bed kicking out the rear, the stainless-steel kitchen is well protected from the elements when the awning is set up, too. It’s sporting your standard 12v pump-fed water supply to the sink with 200L of water split between two tanks underneath. A Truma gas hot water system is plumbed into the sink and an external shower. Cooking duties are taken care of with a Dometic three-burner arrangement and in typical MDC fashion, there’s plenty of fold-out bench space. A stabiliser leg slides in underneath the kitchen, but is a tight squeeze. If you owned one, you’d probably lop a few inches off with a hack saw to make it easier to get in and out. I’ve heard there’s more important things than size anyway.

Inside is decked out like an Ikea showroom, with four cupboards in the entrance. The lounge and table is quick to set up, but has to travel in the down position. They all do, but it’s worth mentioning before you put the table through your tent.

If you’re on the hunt for bells and whistles, the MDC should be suitably noisy too. The heart of the electrical system is a monster Projecta 240V charger that feeds down into twin 100AH AGM batteries mounted under the seats. There’s a 120W solar arrangement permanently mounted to the boat rack that’s then regulated by a Projecta IDC25. It can also be charged with an Anderson plug on the drawbar when you’re on the road. There’s a few USB and CIG sockets inside too, with a 240V wall socket under the table powered up by a 1000W invertor.

BUT HOW DOES IT TOW?

I’m a glutton for punishment, so my idea of what constitutes a well-behaved trailer is probably a little skewed, but the Robson XTT performed flawlessly both on and off-road. Between the XTT and my Ranger I had a set-up over 11m long, weighing in at a hair under 4T, but it never felt unwieldly or imposing. The light weight helps massively, as lane and speed changes don’t see the camper flopping around like a joke I probably shouldn’t make. The unladen towball weight is bang on 185kg, which is more than manageable for anything with leaf springs in the rear, although when loaded up to its ATM many coil spring 4x4s might struggle without a suspension upgrade. Again, it’s physics, but it’s worth mentioning.

Rather than the cumbersome poly block style hitch, MDC has opted for the McHitch 3500kg “Easy-Fit” automatic coupler. It still functions the same as their regular offerings, with a universal joint and spindle giving a huge range of articulation, but the unique connecting method allows you to simply reverse until the two halves meet and it auto-connects. It made for far easier hitching and un-hitching, especially in steep terrain.

Off-road the Robson XTT was surprisingly nimble considering its size. We punted it through a few tight winding tracks with plenty of off-camber washouts and wheel lifts along the way. Despite its extra width, it didn’t pose too much concern on tight corners and the checker-plate sides protected it from being peppered with bush pin-stripes. My Ranger wasn’t so lucky, I wonder if I can claim that as an expense? The independent suspension arrangements get a lot of flak for not having massive amounts of travel but in my experience, it’s not an issue. The big camper simply followed the tow-tug and with a relatively low centre of gravity, was stable throughout the fun...I mean testing.

If I was aiming for first place in a rock crawling event I might un-hitch first, but for the kind of terrain you’re likely to tow a camper down, the XTT won’t hold you back.

A PLACE FOR EVERYTHING

We mentioned earlier in spite of its huge size, the Robson XTTs alloy composite body means it tips the scales at 1570kg but the ATM is still a huge 2250kg. That’s 680kg left over for camping goodies. Another 300kg and you could load a Toyota Echo onto the boat rack. Of course, you’ll lose 200kg of that with the water tanks full, another 120kg with the boat rack loaded, and another 40kg if you drink as much around a campfire as I do.

So where do you stick half a tonne of camping gear? I’m glad you asked. Obviously, the lion’s share of bulky items can go on the boat rack, it sports rubber protectors on both ends, too, which makes it less likely to do damage to loaded gear over corrugations. With a little juggling, the rack can flip over to the ground making for easier loading and unloading. The gas struts do help with the weight, but unless you start your day with deadlifts, it’s a two-person affair. The storage box up front will swallow most other large items with the fridge slide capable of taking up to an 110L Waeco, while the pantry has plenty of storage for dry goods. It’d be great to see a revision to the latching mechanisms in future to make opening and closing a one-handed affair.

Like most hard floor campers there’s plenty of room on the floor for bulky items, like pillows and bags of clothes, but considering it basically has a walk-in wardrobe, you won’t be short for storage locations. Blankets and sheets can stay strapped to the mattresses up and out of the way. Some of the storage room will be eaten up by the TV, although the mounting location is a little goofy, so it might end up left at home or re-jigged to suit what bed you’re sleeping in.

As much as camping is a family affair, if you have more than one or two miniature angrier versions of yourself, you’re generally pretty limited to what you can head bush with making twin-folds an attractive proposition. The Robson XTT is hardly the first of its kind on the market, and there’s plenty of comparable twin-folds all vying for your money, but MDC has worked hard to earn themselves a reputation for going just that little bit further than the crowd. The Robson XTT just simply has more. It’s got more quality components, nicer finishings, more bench space, and provides an ability to spend longer at camp without worrying about the stresses of daily life.

If you’re on the hunt for a stripped-down camper to take you and your partner to the ends of the earth the Robson XTT ain’t it. But if you’re after an affordable option, with plenty of room for your whole tribe without it feeling like you’re dragging a semi-trailer behind you, the new MDC offering is well worth a look.