It doesn’t take a rocket surgeon to figure out the camper trailer market is bursting at the seams with manufacturers. The overwhelming majority are genuine enthusiasts who care about their products, use their kit, and often get so caught up telling you yarns about their latest offroad adventures they forget to sell you a camper. These are our people.

The problem is, there’s also a whole lot of manufacturers jumping on to Chinese Gumtree and ordering campers by the container-load without ever stepping foot on a sandy beach or red desert.

So, what do you do when you fall firmly into the first category and need to make your gear stand out from the second? If you’re anything like the crew from Blue Tongue Campers, you use it, and use it, and use it some more. And you keep using it until you know it inside out, have upgraded or modified it to the nth degree until you’re happy to live out of it yourself. 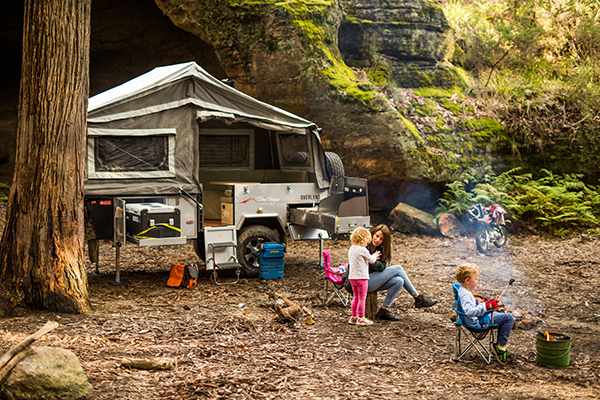 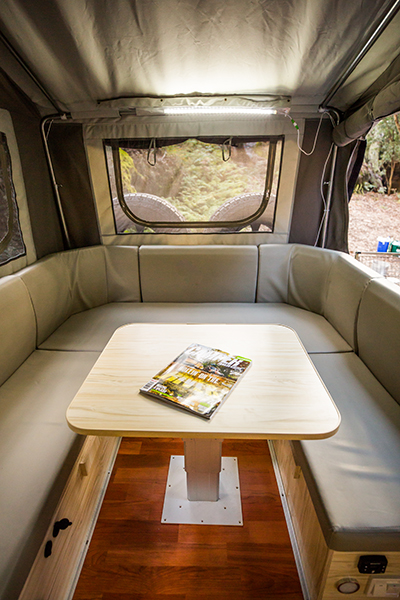 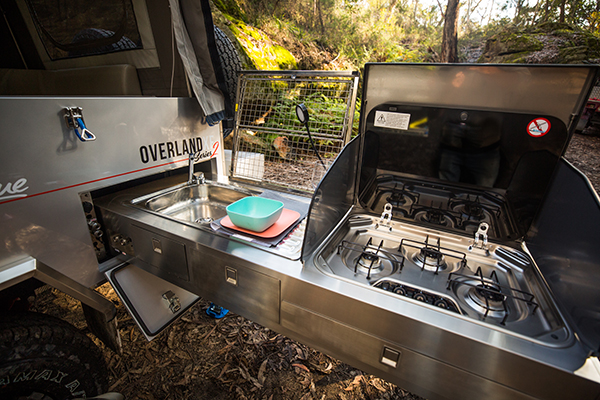 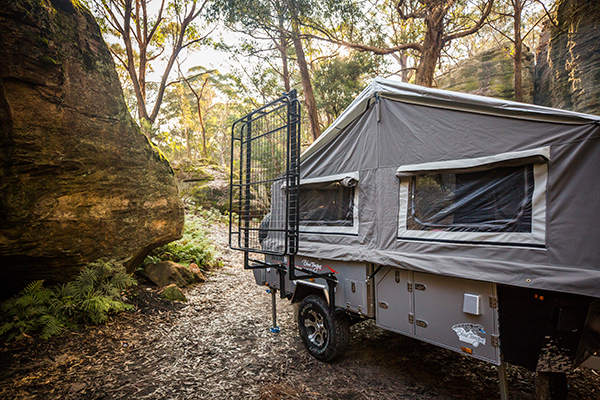 Despite having a relatively small presence, the guys and girls at Blue Tongue are a passionate lot. So after getting a few of their new models sorted, they figured it was high-time they turned drawing board and spanner roll to their successful Overland XF forward-fold camper.

They’ve cut and polished and massaged every square inch of it after years of customer feedback, trying to get the perfect balance between storage space and lighter weight. Have they pulled it off? Only a wheel lifting adventure in the New South Wales hinterlands would uncover that.

Like it or not, hardfloor and forward-fold campers are normally substantially more complex than their softfloor counterparts. Complexity brings weight. And more weight means more potential for poor handling. It’s the reason why so many softfloor campers normally do as they’re told while heavier twin or rearfolds bounce around like a kid on cordial just heading down the blacktop.

The long and the short of it is manufacturers need to worry not only about a reasonable ball weight, but balancing the trailer right so it doesn’t turn into a pendulum shaking itself to pieces quicker than Julia Gillard’s political career. To that end it’s obvious the guys at Blue Tongue have spent a lot of time carefully placing the various components small and large throughout the Overland XF S2.

Despite punching in to the middle weight class it stays poised and composed through rolling back-country roads and corrugated tracks alike, never once kicking the tow-tug in the rear.

Of course, it’s not all about juggling your egg cartons and long life milk to make your camper ‘get’r dun’ on the long haul, and there’s plenty that can be attributed to the spec sheet as well. There’s a set of beefy 12in electric brakes hiding behind each wheel. Now, there’s more than a few campers in this weight range still clinging onto 10in brakes, so the Overland XF S2 easily held its own in terms of stopping power, never once poking the Ranger in the back.

Ball weight was also a reasonable 135kg so the trailer rocking back and forth over undulations didn’t cause the rear end to pogo, either. In fact the leaf sprung Ranger we were hauling with didn’t have any noticeable sag, so even softer sprung coil setups like those found on mid-size wagons or the Navara NP300 shouldn’t have any issues towing the camper.

HOME AWAY FROM HOME

The S2 follows a pretty standard formula when it comes to setup, so it should be instantly familiar with anyone who’s spent more than an hour at a camp show and that’s a bloody good thing. It’s your classic forward fold design with the usual Blue Tongue Campers spit and polish, although Blue Tongue denied any actual spit went into the construction.

Drop down the legs, unbuckle a couple of buckles and the main bed section simply flips forward and into place. It’s a reasonably easy proposition for two people but if you’ve got a cold beer in your good hand there is an easy-to-attach winch up front that can do the grunt work for you. There’s a queen-size bed but it can be upgraded to a mattress from Slumberest for a softer offering. The lounge area needs to be packed down for transportation but can all pop up in a matter of minutes with some careful cushion Jenga and a little cranking on the tables handle (a dramatic improvement over some ‘pop-up’ offerings).

There are two poles that need adjustment and a couple of spreader poles before you’re reclining in leather-ette comfort, or if you’re setting up the awning it’ll tack around 10 minutes onto the job. There’s plenty of room in the box too so the awning can stay zipped on when packed away and won’t eat into your storage space.

If you like camping of the frosty variety there are a few different ways you can warm your bones at night. There’s the old fashioned be-nice-to-your-husband-or-wife option, but if that doesn’t work there’s a stand-alone Dometic hot water system for the kitchen and hot showers. These can be spec’d up to include ducted heating as well, or if you’re frequenting powered campsites a 240V water system is available.

At the back, the stainless steel kitchen has the usual Blue Tongue fare such as an integrated drying rack over the sink and a SMEV 3-burner cooktop. It’s plumbed into a 120L stainless steel water tank while the shower gets its own 35L setup. The kitchen has a few fiddly bolts that are destined to catch constantly, but while it’s out there’s an extensive wind break so adverse weather shouldn’t affect a good night’s feed. If you tick the box you can pick yourself up a Waeco fridge for the front storage box as well but the slide will accommodate most large fridges you can throw its way.

The 12V setup is more extensive than many of its similarly priced competitors too. Twin 100Ah batteries hide under the driver’s side lounge with the test model using an optional Redarc Manager30 battery management system. It can be fed with either 240V in or an Anderson plug on the drawbar connected to your tow-tug. The 12V control panel runs all the lights, fridges and plugs, but also has two separate controls and gauges for the twin water tanks so you can keep an eye on water levels.

For those who like their doctors of the Who variety, the storage options in the Overland XF S2 will make a whole lot of wibbly wobbly sense. If you have no idea what I’m on about just know it means there’s a whole heap of storage that seemingly never ends.

Up front the twin 4kg gas bottle holders and dual jerry can holders have been tucked inside a large storage box that will also house the diesel tank if you tick that option too. It’s vented top and bottom and opens for easy access so storing gas in there shouldn’t be a concern.

The boat/storage rack is now included which saves you precious box-ticking time on the order form and with the included basket is actually useful for typical camping gear. One gripe was longer items such as kayaks will foul on the spare tyres but it may not be a deal breaker for you.

The main storage box will swallow any fridge you can shove its way and there’s plenty of extra room on the driver’s side for bulky items like generators or a few cases of XXXX (or whatever beer you prefer for fireside chats). The optional diesel heater does eat into this space but with plenty of insulation covering the hot bits there’s still plenty of room in there (maybe don’t fill it with fireworks, though).

In an unconventional addition, the second lot of storage in the main box isn’t chock-a-block full of tent poles, they’ve been kicked up the back in their own purpose-built box. Instead, there’s a trick slide-out pantry setup that’s vertically stackable so you can fit in bulk dry goods. There’s near on 700kg of payload depending on how you spec it so if you’re looking for extra space to store stuff there’s plenty of hidey-holes on the floor inside the main box or underneath the lounge.

Over the years I’ve spent plenty of time towing trailers to places they’ve got no right being, and seeing trailers catch out the owner on obstacles not much harder than a Macca’s drive-through. While some campers lend themselves to hardcore offroading, the limiting factor is almost always the tow-tug running out of traction or the driver running out of talent. That said, picking the right tool for the job is half the battle so the Overland XF S2 shouldn’t be your first choice if you’re keen on forging your way through long-forgotten tracks and beating rock ledges like they’ve insulted your prophet.

Now that doesn’t mean it’s not up for the job, far from it, but it’s a bit like taking a freshly polished Kenworth into a demolition derby. You’ll probably win, but you won’t like the results. Underneath there’s a rock-solid foundation with a beefy 100x50x4mm drawbar going all the way from the trick new AL-KO Off-Road Ball Coupling right back to the suspension mounts. It essentially makes it a one-piece chassis as far as major loads are concerned with a lighter weight 100x50x3mm set of rails stopping the back of the camper dragging. The Tare is around 1500kg with the boat rack on so it’s reasonably light-weight enough to drag into and out of ruts without too much drama, and the standard fare independent suspension didn’t suffer too much offroad, although it did eat a mud-flap through one particularly steep rut, sorry Blue Tongue.

The pole box out the back is a great addition for freeing up storage room and getting weight off the towball but did come perilously close on a few rock steps down. Blue Tongue doesn’t market the Overland XF S2 as a hard-core rock crawler camper, it’ll do it with some careful spinning of the wheel but it’s far more suited to eating up corrugated kays and doing it in comfort.

If you’re the kind of bloke or blokette who has to have the hottest new design in everything you own then the Overland XF Series 2 might not appeal to you, but there’s plenty of people out there who will find it their perfect setup. It’s priced a little above others in the import market but it’s obvious those extra dollars have all gone into making the product better. There’s more big-name gear, nicer finishing and more thoroughly refined design than you’ll find in a lot of showrooms.

Sure, it’s not the burliest trailer if you’re looking to bounce your way through the local rock gardens, but if you’re after a well screwed together camper with plenty of nice touches and enough comfort to keep yourself on the good side of even the angriest better half, the Overland XF Series 2 won’t leave you disappointed.