There are two very distinct types of manufacturers in the camper trailer industry. Some drive fancy cars and wear expensive suits, and view their trailers as a means to an end, then there are the companies run by genuine enthusiasts. The kind of people who probably packed in a successful job with financial security to do something they love, be part of the outdoors industry and help likeminded people find their own slice of paradise. There’s big and little companies of both varieties, but the passion and product knowledge of the later is something you can pick from a mile away.

It was that attitude that made the Western Sydney based Teardrop Camper Company stand out to us immediately. When we stumbled across them at the Sydney show there was no clever marketing tactics, no expensive stands, and no fleet of demo models. Just Frank, his girlfriend Olga, and their own personal camper, the Maverick. It’s often the companies with that level of personal investment that will have the brilliant ideas, the quirky designs, and the approach to camper trailers years ahead of their time. In the case of Frank and Olga that idea was bringing 80+ year-old teardrop designs into the modern age with high-tech suspension, up-to-date comforts, and offroad ability that’ll make more than a few competitors reconsidering their designs. The result is something else and we couldn’t wait to put it to the test. 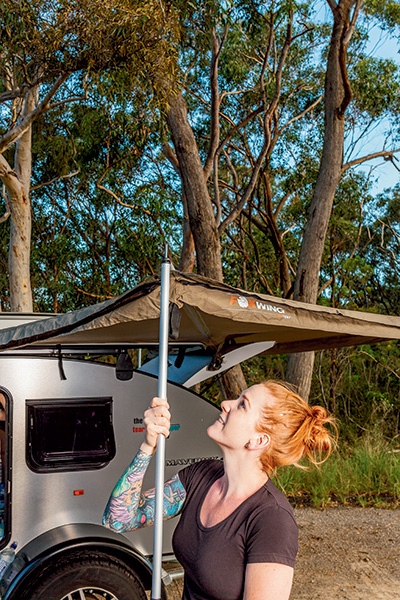 In a sea of folding square boxes, the Maverick stood out like a shining beacon of design. Before we had even snaked our way through the packed showgrounds we immediately knew we wanted to know more, as did the huge crowd gathering around. At face value the concept may seem gimmicky in a retro throwback kinda way, ala Chrysler’s PT Cruisers, but the Maverick makes it work. Crawling inside and outside of the Maverick you’re presented with all the familiar gear you’d expect to find in a mid-$30k camper trailer. There are big name components throughout, galvanised chassis, heavy duty suspension and little details everywhere you look that contribute towards an easy to use camper. It’s the result of having the people who design the camper the people who use it as well, when Frank and Olga find it’s lacking something they simply head back to the workshop and fix it.

The fit and finish is impeccable too, with a mixture of fibreglass, aluminium, vinyl wrapping and insulation it feels like you’re sleeping in a premium product. There’s plenty of nifty little features too like the dust-proof doors and windows, the lockable fly screen for secure sleep without having to batten down the hatches, and a full suite of armour that makes the Maverick ready to do battle in any offroad terrain. The only immediate downside is the side rails could make accessing the camper difficult for some with mobility problems.

When it comes to storage the Maverick is a bit of an oddity, owing to its unique design. Up front there’s a large storage box like you’d find on most campers, although this one isn’t half eaten up by a fridge and pantry. It’s purely there for shovelling in bundles of camping gear with a few clever points like  the sealed off compartment for the hot shower and a channel mounted up high for storing the Foxwing’s poles. The water pumps are tucked inside the storage box for protection but it would be good to see a false floor to keep them isolated from storage items.

In the rear, the galley-style kitchen stores the fridge inside at bench height, so no need to pull it in or out, just to grab a drink, and there are bundles of storage under the preparation bench and overhead in the drawers. It’s an unusual arrangement but one that makes setting up for cooking a breeze, simply lift the hatch, slide the sink and cooker out and you’re good to go. There’s even a strip light literally above the cooking area so there’s no dodging shadows while you’re cooking up a pot of meatballs.

Inside there’s plenty of storage for large items like clothes bags or tubs of camping gear, although they will need to be pulled out before you can pull up for a night. That said, the bed stays fully setup, so if you’re not bringing three suitcases of clothes along for a weekender you can literally pull up, open the door, and get in. It’s that easy. If you’re a light packer, there’s twin cabinets inside that are plenty large enough for a few day’s clothes too, with a rack on the roof for carrying lightweight but bulky items. In total there’s over 300kg of available load and plenty of room to put it. You can think of it a little like a caravan in that regard, just without the floor.

It’s in that vein that it’s so practical as well. It doesn’t have a million and one hatches that need to be operated just to make a sandwich, there’s literally no set up time if you’re doing the bare minimum, and with the included Foxwing you can be fully set up and protected from the elements in a matter of minutes. There is just the one bed, and no dance floor like you’ll find in rearfold campers, but with the optional tent on the second awning you can still have plenty of floor space, and still be faster than most camper trailer awnings.

You can throw all the dual acting suspension and reciprocating anodized hitches at a camper you want, at the end of the day the number one thing that will make a trailer better in literally every offroad situation is cutting weight. It’s the reason the adventurous manufacturers are striving for lighter while others are trying to go bigger. All kitted up the Maverick weighs in right around 870kg, or around half the weight of many hardfloor campers. It’s also incredibly compact at 4560mm from hitch to rear bumper, and surrounded by a heavy duty rail all the way around. What does all of that mean? You’d have to do something incredibly stupid to hurt it offroad. It’ll tow easy through sand, won’t anchor you down through steep terrain, and won’t push you downhill when you’re on the brakes.

Of course, it’s not all in the design either, and the Maverick has plenty of big ticket items that help its offroad prowess. Up front there’s an AL-KO Off Road 3600 hitch that’s connected to the 100x50x3mm thick galvanised chassis, front and rear water tanks are protected with checkerplate aluminium bash guards and the suspension is AL-KO’s beefy Enduro independent trailing arm arrangement with 10in electric brakes and 245/70R 16 all terrain tyres.

On our test loop with plenty of fast flowing fire trails the Maverick was planted at all times. It didn’t sway around from side to side or jitter on every corrugation we came across like so many campers do. The design lends itself perfectly to a low centre of gravity, which makes the camper stable in every situation, reducing the chance it’ll slide around and pull you sideways off a track. It’s by no means perfect, and scraping the walls along a rock ledge would cause some serious carnage, but they’re so well protected and on such a stable trailer you’d rip your tow-rig to pieces before even getting close to the camper.

One of the most appealing things for any camper trailer is the ability to just get in it and go, there’s nothing worse than all the rigmarole of lining up finance, hunting around for the perfect camper, waiting weeks or even months for it to be delivered then finding it’ll take you a few weeks again just to fit it out with all the bits and pieces you’ll need to head bush. To that front, the Maverick doesn’t disappoint. How you see it is exactly how you can order it, including the matching linen and curtains.

On the power front the heart of the beast is twin 80Ah AGM batteries tucked inside the galley kitchen. They’re kept charged up via the tow rig through the included Anderson plug on the drawbar, or through the Powertech 30A charger and twin 120W solar panels up on the roof. They power the LED lighting throughout, including the reading lights and ‘patio lights’ above each door. They also power the twin 12V pumps. One runs into the sink from the 65L water tank at the rear with a second 65L water tank up front feeding into the Smarttek 6 hot water shower.

Inside there’s an included 21in TV with USB input and the Fusion stereo can play music wirelessly from your phone. The Waeco 50L fridge is included as is the Primus two-burner cooker and 4kg gas bottle it’s connected to. In fact the only option on this model is the second awning.

If I seem like I’m rambling on and on about the Maverick it’s because it’s a damn good camper. I admit it’s not going to suit some people. Those who need the multiple sleeping options of a forward fold might find it lacking, there’s no hardfloor section, or seating area, and if you’re after the rugged live out of it for six months trailer some companies offer you, will find it lacking in storage too.

But for those with a well-equipped tow rig who want a simple to use, easy to set up, surprisingly affordable camper trailer that’ll work its way down any track you’re game enough to drive down, the Maverick makes a hell of an option. In fact, the only downside you’ll come across is every man and his dog wanting to chew your ear when you pull in to camp for the night. It got old quick.