When eyeing off a new camper trailer, your first impression is often a clean showroom with a handful of salespeople milling about, and possibly a few more out the back assembling them from imported parts.

So, my experience of the Cub Escape – and as a result, my first impression – was vastly different to this scene.

This is a camper that screams hand-built (but in the good way), and that’s probably because while you’re inspecting the alloy panels for pre-delivery, there’s a fella just 30m away riveting them on. Just next to someone wielding a welder. 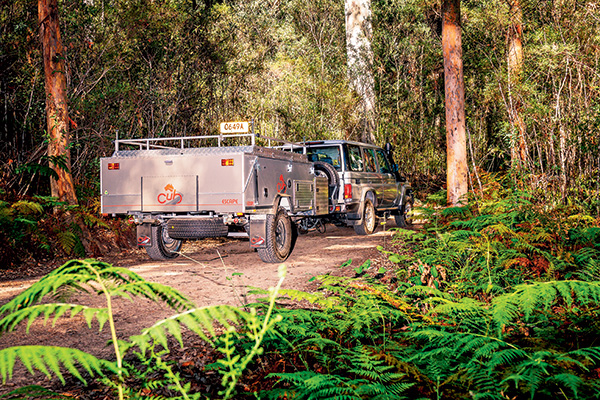 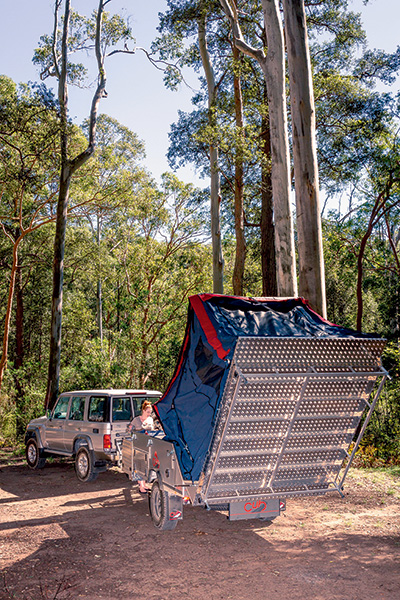 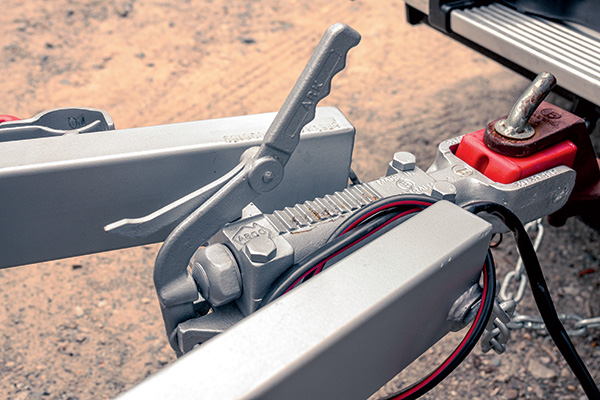 Paint is down the hallway, as is trimming and canvas installation. You get the picture...

This whole process and experience makes you look at the Escape, and all Cub campers with a different outlook.

Sure, they might not necessarily have complicated panels or construction methods that require robots, but it does have a talented craftsman out the back, signing off each model with pride.

It’s immediately obvious these campers are built with care and precision and that’s a damn good first impression to make.

Away from the workshop, in the peace and quiet of the bush, the appeal of the Escape did not wane.

It’s ruggedly built, with a clear understanding of what it truly takes to build a reliable camper.

Areas that are open or susceptible to damage are protected with aluminium plating, especially underneath. The paint is thick, the doors feel solid, and there’s lots of little details that show the Cub pedigree and knowledge of its market. Even the flares covering the tyres are made of rubber, so they can take a hit or two against a stray tree before showing signs of fatigue.

Opening up the Escape reveals more of the same. It’s a tried-and-tested rear-fold design, so setting it up isn’t overly complicated. There are six over-centre latches that need to be popped, as well as a hatch in the rear before you can sling the lid over.

Despite providing a huge floor space, the lid is one of the lightest I’ve ever used and can easily be lifted to its balance point one-handed, before slowly being winched down into place.

Inside, most of the poles can remain extended with just the rear-most hoop and legs requiring attention.

The tent is made in-house from Aussie Wax Converters canvas and the design and execution is leaps and bounds ahead of some other similar-priced campers, with no holes in corners or hinge area.

It’s even held into place with a series of mounts all round, to help minimise any cold air sinking in. This alone makes it worth any extra investment.

On the storage front, the Escape doesn’t disappoint. Up front there are two 4kg gas cylinders included, and two 20L jerry cans on the drawbar with enough room left over to squeeze in a bag or two of firewood or a couple of small kids’ bikes.

Behind that, the storage box has a built-in slide that’ll accommodate up to an 80L fridge from most popular manufacturers with a pre-wired Merit socket. There’s also storage for all the tools required to adjust the AL-KO stabiliser legs at the rear or lower the spare tyre. In a welcome sight, the Merit socket is kept high inside the fridge box to keep the power cord away from the slide and the vertically-lifting gas-assisted door provides an easy-to-use unit.

On the driver’s side, the same box has a second storage area large enough to swallow a generator, hot water system, the annexe or any other bulky items.

Moving into the main box, the passenger side hatch hides multiple storage options. The first is the large stainless steel kitchen. There’s a twin-burner Smev stovetop that serves as a food prep area when the lid is down and there are drawers underneath for storing cutlery, plates, bowls, and cups. The sink uses a hand-pump to keep costs down but can be upgraded to a 12V option if needed.

Behind the kitchen is a pantry, that while not big enough to store large items, does provide easy-to-reach storage while cooking.

Inside there’s even more storage, with a stand-alone lock box at the foot of the bed, a rear section accessible with the camper closed, and a huge area under the bed itself.

Sadly, the downside of such a lightweight camper is with less than 400kg of payload available, you’ll run out of weight before you run out of space.

But, when it comes to practicality, the Escape is right up there with the best of them. The setup is quick and easy, without any of the heavy lifting often found with hardfloor campers. Like many rear-folds, it sports just the one bed, but there’s plenty of floor space for a couple of kids in bunks until they’re old enough to hoof it themselves.

There are barely any poles to set up if you’re not throwing the annexe on, and a comfortable camper-queen-size mattress inside. It does lack an ensuite and lighting, but the list of available options is long and reasonably priced, so it’s easy to customise
to your needs.

Put simply, the Escape performs better offroad than a hardfloor camper has any right to, but it’s not by accident. It’s incredibly light by modern standard, at only 960kg Tare or 1350kg fully loaded. Ball weight is a reasonable 130kg, and for a hardfloor, the Escape is actually quite compact, but that doesn’t tell the full story.

Up front, there’s the obligatory Treg hitch which allows the camper to pitch and roll behind you without flipping the tow vehicle on to its lid or binding up. But beneath that are a lot of clever inclusions that, while not exactly ground-breaking, are bush-proven winners.

The jockey wheel doesn’t swivel up only to be ripped off later, instead, the bracket is hard welded, with the wheel just popping out when you’re hitched up. The handbrake mechanism hangs below the drawbar, and so has a beefy plate protecting it.

Rather than a complicated independent suspension that can miss the mark, the Escape uses a simple, weight-saving eye-to-eye leaf spring design with plenty of ground clearance and a reasonable ride. If you were to strap yourself in for 1000km of corrugations you might be able to feel the difference between leaf and coil springs, but your mattress isn’t going to care.

In another uncommon but welcome sight, there’s one good shock on each wheel, with a pair of Rox Shocks instead of the cheapies many run.

Likewise, the chassis has been constructed out of 2.5mm Australian steel to keep strength up and weight down, instead of the overkill frequently found. It’s backed by a five-year structural warranty and comes sporting 31in Goodyear Wrangler tyres on 15in steel rims too, so Cub is putting a lot of faith in its product for serious offroad work.

On our favoured test track, the Escape easily tracked behind the Cruiser with plenty of ground clearance to weave through the ruts and rock ledges that have left battle scars on more than a few lesser campers over the years. Its low weight and ample ground clearance helped avoid the ground anchor feeling many campers have.

In short, if there’s a track you’d be comfortable taking a camper down, the Escape is up for the job with a few dented panels being the worst possible outcome.

With a low weight and attractive price, you can’t expect a laundry list of inclusions from the Cub, but it still manages to hold its head high.

The 12V arrangement is a combination of Narva and Projecta components throughout. The heart of the operation is Projecta’s IC2500 battery management system, allowing for charging through the 240V inlet on the driver’s side or the Anderson connection on the drawbar.

The externally accessible power panel has a remote display for the IC2500, so you can manage your battery system without cracking open the camper just to check battery levels.

There’s 12V Narva outlets inside and out, with a set of 240V inlets at the foot of the bed, although you will need to be plugged in to mains power to use these.

It’d be great to see built-in lighting as well as power options by the bedhead, but as they’re easy additions, this won’t be a deal breaker.

If you’re planning on spending extended trips in the one spot, it’s worth springing the extra $150 to have the camper wired for solar input as well.

The kitchen is well equipped with the two-burner Smev stovetop arriving already plumbed to the included gas cylinders, with only two plugs required to get the kitchen up and running when stopped.

The sink is fed with a handpump from the 80L poly water tank, which although on the small side, is a necessary sacrifice for a lightweight trailer. You can’t build a two-storey house then complain about stairs…

It doesn’t come sporting hot water in standard spec either, but can be optioned up for a reasonable amount to include an ensuite, shower, hot water system and an extra opening in the tent to access it all.

It’s a sad fact of life that in our quest to save a few dollars, some campers become almost throwaway items – buy them, camp for a few years then sell it dirt cheap and start again.

The Cub Escape is the kind of camper you only buy once.

It’s a versatile platform that can work for families of all sizes, including those with just two members.

There’s plenty of space, the gear that is included is all top quality, and should, in theory, hold about 90 per cent of its value and condition for years to come.

If you were setting off around the country for the big lap and wanted a camper you could bounce around some seriously remote tracks, or you just want a faithful camp companion you’ll keep well into retirement, the Escape will do it all with a smile on its face.