New camper designs are often derived when would-be entrepreneurs branch out on their own, or practical minds strive to improve current offerings. Many make a fair attempt, but every so often, a start-up camper leaves you agog.

Such a vision came before me at the Sydney 4WD Show in 2016. The model? BRS Offroad Pursuit Platinum. At first glance, the luxury hybrid offroader had lots going for it so I drove to Redhead, NSW, for a closer look. And after my first serious look, I was left thinking: “Wow!”

Ben Souter developed the BRS Pursuit. The former luxury home construction worker had toyed with the idea for at least three years before his tenure with a caravan components manufacturer ended. 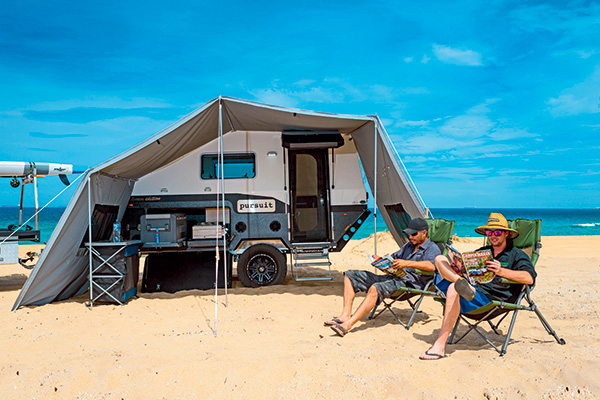 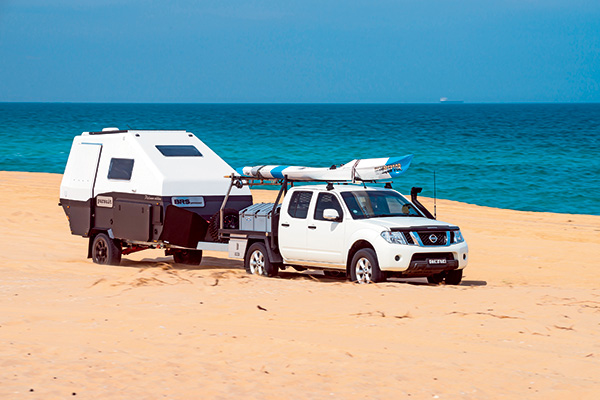 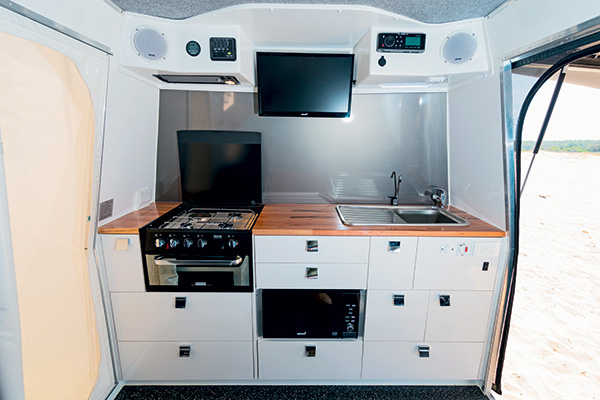 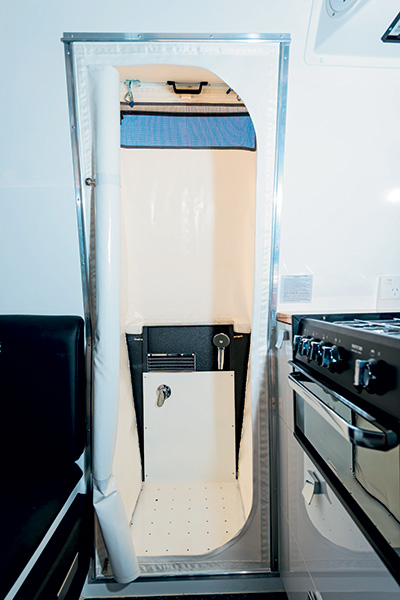 Paper sketches were transferred to chalk drawings on the workshop floor, then to a full-scale model in MDF. That’s right, a full timber camper.

“I’m a chippie by trade, so that was the easiest way to see how it looked,’” Souter explained. “In the end, we used the top half of it to make the mould for the finished camper.”

That was two years ago, and BRS Offroad has since sold a handful of campers, modifying its designs to resolve pre-production bugs. Now it’s hit the ground.

The body is the core of this full-height camper. Made from marine-grade 5083 aluminium, the lower half would probably float if it wasn’t for the two notches cut in it for the doors. The top half is a formed one-piece composite panel with a 32mm high-density core (similar to cool room walls), which is hard structurally and very well insulated. It is attached to the base via a complex series of bonded surfaces.

The body sits on a 150x50x3mm hot-dip galvanised chassis from the hitch to rear. Souter chose an AL-KO offroad coupling to work on a 50mm ball. It rides on Cruisemaster dual shock trailing arm suspension with 12in electric drum brakes. The wheels are black 17x8in CSA alloys with 265/65 R17 Maxxis all-terrain rubber. There was no stone shield for the spare that travels in the centre of the drawbar, however, and I could see it getting knocked about by stones.

External features include a 95L Waeco fridge/freezer and a Sizzler barbecue, which both slide out from a large bay beneath the bed. According to my calculations, this area provides 818L free space, in addition to a few other nooks and crannies and another 272L in a large tunnel boot running right across the front, which is a lot.

I think it needs a bulkhead to separate it from the adjacent fridge/barbecue setup to prevent contents falling into the runners. When I told Souter, he agreed and plans to offer it as an option. There was no bench near the Sizzler barbecue to make outside cooking easier, but one would easily fit.

When I opened the bottom-hinged door to reveal the 21L Porta Potti 165, the top lip touched the sand but this does hang clear on firmer ground at normal tyre pressures.

The front box contains two 9kg gas cylinders, two jerry cans and an air-conditioner that vents to the fridge box and to either side of the bedhead. It kept us remarkably cool inside on the beach in 37°C heat but, even with the 300Ah lithium battery, I’d use it conservatively off-the-grid.

The front of the camper is protected with aluminium stoneguards that are finished in a tough Rust-Oleum black coating that differs to the black finish on the lower aluminium body panels.

Access to the interior is via keyless gullwing doors on either side. These lift at the touch of a remote, but open manually if required. On the passenger side, an automated two-stair Tecno Step with manual override drops into position and folds back to sit level with the bottom of the adjacent water tank on travel.

The doorway is fitted with a zip-in insect screen.

The interior seems large despite the camper’s modest size and is brimming with comforts. At the front is a full camper-queen-size bed with innerspring mattress. Along either side of the bed are 170x230mm storage bays. Below the foot of the bed are two large 775x230x720mm drawers, and across the back of the camper is a large bench with six 500mm deep drawers, plus three more across the floor tapered to follow the departure angle.

The bench carcass is made from PVC board in a choice of five colours, resists rot and withstands normal wear and tear. The floor is finished in layered Nulook epoxy normally used on garage floors so it’s extremely tough, and is available in a choice of nine colours.

The benchtop in our review camper was ash hardwood but you can also choose from a variety of laminates complemented by a splashback in a choice of eight colours.

The bench has a stainless steel sink with drainer, mixer tap and filtered water, and a gas and electric four-burner Thetford stovetop and grill. There’s a 25L microwave in the centre of the bench and above the cooktop is a Dometic exhaust fan. Opposite that is a Fusion stereo and DVD player, with internal and external speakers, and between is a HD 21.5in television.

Just inside the doors either side of the camper are two seats resting above two 30L fridge drawers. Between the two seats, above the under-bed drawers, is a pull-out table. Around the bed are three wind-out windows, double insulated with screens and blinds.

In the carpeted ceiling are six LED lights, including two reading lights at the rear. All can be remotely controlled, which will help when finding your camper at night in an unfamiliar campground.

On the driver’s side is a nifty pull-out shower. The floor pulls out beneath the door and is braced by two diagonal arms that attach easily with pins to wall. The door then lifts to form a hard roof for the shower. Canvas walls and a zip-up internal door provide privacy inside and out. The whole setup process takes just two minutes.

Within the shower ensuite is a toiletries rack, the shower head and other bathing necessities. The floor is perforated and all water drains into the 75L grey water tank. It’s a very neat and effective system.

The shower and sink can draw water from mains supply or from two poly water tanks – at 127L and 85L – totalling 215L (excluding the 22L Suburban 12/240V gas HWS). The tanks are shielded by 3mm HD aluminium.

The 300Ah Enerdrive lithium battery and management system, which provides 240A useable power, is fed by a 60A charger and DC-DC charger/regulator system and equipped with a 1600W pure sine wave inverter.

There are five double 240V outlets around the camper plus four 12V points internally and two in the storage locker. When I suggested he fit more USB ports inside, Souter ordered 4A double USB ports from Enerdrive in addition to the 12V plugs. I’d also like to see an external solar input for relocating the 300W rooftop panel when the camper is in shade.

In addition to the panel, the roof supports an omnidirectional TV antenna, the outlet for the internal exhaust fan and a filtered pressure scupper to keep the interior with positive pressure and keep out dust. These sit above the rear lip on the body, which acts as an aerofoil to reduce low pressure behind the camper and as a passageway for the extensive wiring loom across camper’s rear. A sturdy aluminium bar protects this rear lip from physical harm.

The awning must be reattached each time, but it slides simply into a fitted sail tracking. This is quite high near the middle of the camper, but it’s easily managed using the supplied pole with an end hook. The awning is 5.4mx2.5m, (with a 3m-deep option) and supported by three poles and three spreader bars. It is made from 8oz Wax Converters Billabong canvas and has screened windows front and rear. It comes with a draught skirt, outer wall and filler pieces to connect the camper body to the end walls.

The base model, minus all the bells and whistles, weighs in at about 1200kg Tare, but the Platinum edition we saw was 1450kg. The GTM is 2000kg, giving 550kg of load capacity, though close to 300kg of that will be taken up by full water tanks, gas and jerry cans.

The ballweight is about 100kg unloaded and 140kg loaded.

Measuring 2.7m at its highest point, the camper offers plenty of standing room but this makes it difficult to garage at home or park under low-lying branches. Souter said that some buyers mightn’t like that but he didn’t want a pop-up or tilt-up roof to impact setup times.

BRS Pursuit Platinum is a hell of a camper in any case, and anyone in the market for a hybrid camper should at least take a look at it. It has an awful lot to offer. Some may worry about the level of technology and automatic function but all features had manual overrides.

The asking price for the basic version is $59,000, and for the Platinum edition reviewed here is $74,000, which is in keeping with the cost of hybrids these days and, given the level of fitout, we think it’s pretty good. As is the five-year structural warranty.

As mobile offroad accommodation, this Pursuit Platinum offers a heap. It ticks all the boxes on ground clearance, departure angle and ride quality, and comes with the sort of comfort features that you usually find only in top-of-the-line caravans.

Some judicious minor changes/additions would resolve most of the shortcomings and if you can live with the roof height, you might well have found your future camper.

Check out the full feature in issue #109 of Camper Trailer Australia magazine.