Imagine buying one pair of pants to last your lifetime – throughout the seasons, and probably with a few food-related expansions over the years, too. It would be nigh on impossible, wouldn’t it? What works in one condition won’t work in another. Unfortunately, camper trailers share a little too much with an old pair of footy shorts; at least in a not-one-size-fits-all way. As the years go on, our needs change. Friends tag along for the experience. School holidays pop up, and what was two kids turns into six. More kids get added to the mix then, before you know it, they’re too cool for trips with mum and dad.

So here’s the point: having one camper trailer that’s suitable for changing needs is almost impossible. At least, that’s what we thought until we spent time with Blue Tongue’s Overland XD twin-fold. Sometimes the best camper trailer is the smallest one you can sleep in; one you can drag through the snottiest hill climbs the east coast has to offer. Flip that around for travelling through great expanses on the west coast and you’d gladly trade offroad-ability for amenities. The Blue Tongue Overland XD is one of those rare trailers that straddles both markets. Tough and capable enough to take most places, with enough comfort for the long haul and more than a little versatility thrown in for good mix.

Seen one imported trailer seen them all, right? Wrong! There’s a misconception in the Australian offroad and camper trailer industries that large factories are punching out identical products and slapping on a different sticker at the end of the line. Nothing could be further from the truth! 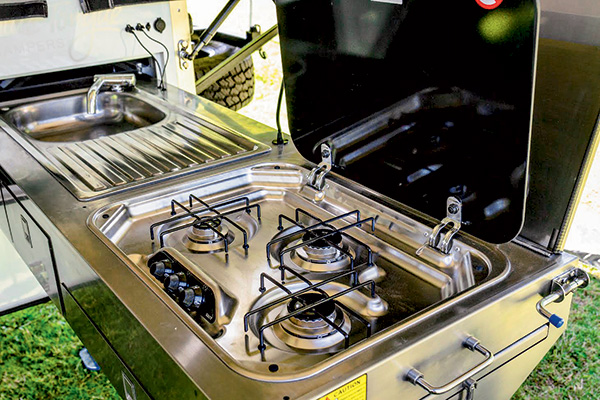 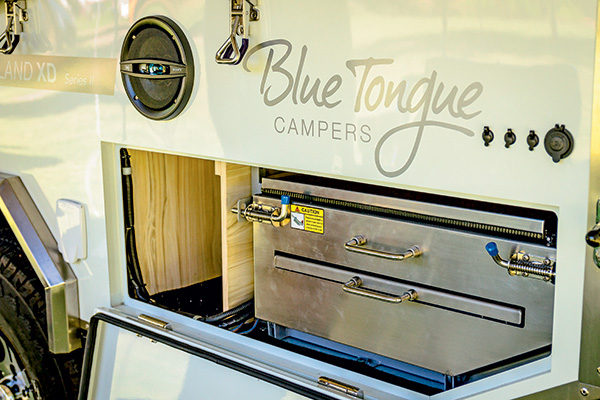 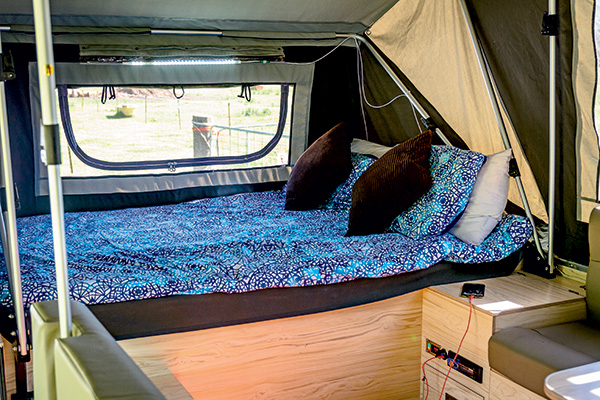 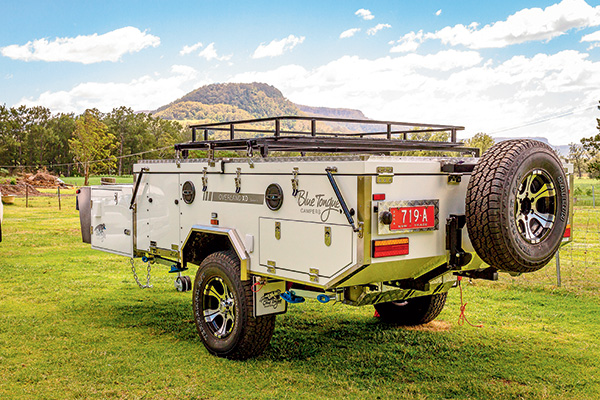 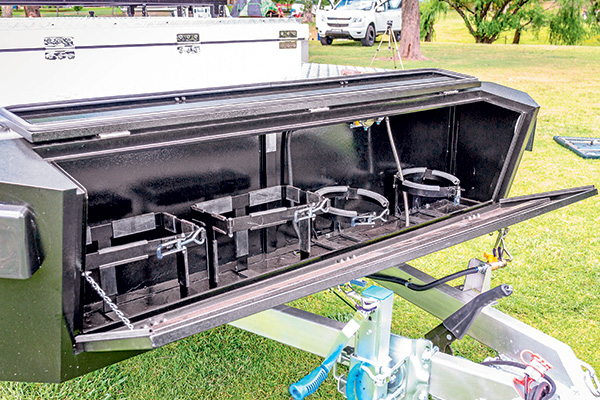 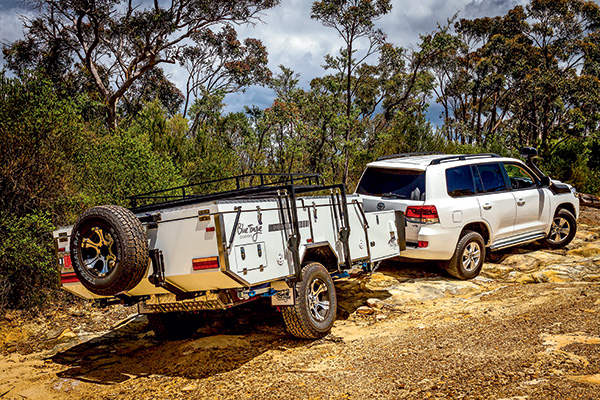 Before we even left Blue Tongue’s Kirrawee, NSW, showroom, we knew the range had its own style. Everything just looked better. The paint was immaculate, the stainless steel trimmings were neat, protective coatings were thick, and every component looked like a quality item. It was obvious at multiple steps through the design and construction process that someone making the calls had spent some time in one of these, which is not as common as you’d hope. Details like the welded shut end caps where the two beds meet (some use plastic plugs) justify any extra cost. And although offroad armour is minimal it’s in keeping with a touring focus.

With both beds open and the interior accessible, this attention to detail continues throughout. Electrical wiring is neat and hidden and the cig, USB and 240V power outlets are conveniently located, with master switches easily accessible even with the trailer packed up. Even the table was better than some we’ve seen. Still awkward to remove from under the cushions, the sturdy base and quick wind-up system make for a simple set up.

Due to the bed layouts being side to side rather than front to back, the Overland XD is wide; think Hummer and you’re on the right path. Every storage compartment is wider as a result. Up front, the storage box-cum-stone tray has mounts for twin 4kg gas cylinders as well as two 20L jerry cans, with room left over for odds and ends. Behind that, the second box can house a massive (optional) 95L Waeco fridge on one side, comfortably swallow all the poles, pegs and ropes in the back, with room left on the driver’s side for a few large tubs worth of gear and the annexe.

On the inside, there’s even more room. Multiple compartments throughout the seating area of various sizes can take everything from bags of clothes through to food supplies or spare parts. Even with a few heavy downpours, water ingress into external compartments wasn’t an issue. The floor space is left largely empty as well, which can also be used for storage. You’ll run out of ATM well before you run out of places to put things, and, with a payload of 425kg, that’s a load of gear. The included luggage rack offers even more space, although would be best suited to large items like kayaks, firewood and bikes, with a total of four gas struts helping shift the weight.

Is the Overland XD capable enough to take most places? Yes. Would you want to? How do I put this gently? No. But let me explain…

It has all the offroad credentials of much smaller camper trailers. Up front, there’s a 360º AL-KO offroad coupling while the sturdy independent suspension has twin shocks on an angle that will work (another uncommon sight), the wheel bearings are heavy-duty items with load-rated six-stud heavy-duty alloy wheels, and most components are tucked up high or protected by checkerplate bash guards. It has ample potential to go down just about any track and, admittedly, we took it places we probably shouldn’t have, but there’s no hiding its size. It is big in every sense of the word. If you’re planning on zig-zagging through mountain switchbacks you’re get good at watching your mirrors, or be prepared to come home with a few dents.

On the positive side, the extra bulk of the trailer also made for a very compliant suspension setup. It didn’t bounce or buck, even over rock steps, and seemed more than happy enough to soak up most bumps and corrugations without throwing us around. The Overland XD isn’t aimed at the ‘bash ’em through the bush’ crowd but can be negotiated through tricky terrain by a skilled driver and a level head without fear it’ll fall apart halfway through a creek crossing.

Enough of the details, what’s this thing like to actually camp out of? Well, surprisingly easy. At least, a lot easier than I expected. The luggage rack pops up and out of the way with a few clips and pins removed, then a few latches and you can start flipping open the beds. It is steel bodied with a thick mattress strapped to each lid, so a two-person effort is recommended. The front bed simply rests down on to the boxes, but the rear bed needs a pair of legs quickly snapped into place. Once you’re inside, the tent will already be reasonably open. A centre pole is held in place with hook and fastener attachment
and three poles over each bed quickly and easily extend to stretch the canvas out tight. From start to finish, you can go from pulling into camp to kicking back with a drink in less than 10 minutes, and the large majority of that time is spent cranking the handle for the stabiliser legs.

It’s a big trailer with a big awning, so getting that up requires no less than 12 poles and a whole lot of swearing. Once you’ve got a system together, it can be zipped into place in around 10 minutes. When you take it all into account, a 20-minute setup for the floor space you get and twin double beds isn’t a bad deal at all. The lounge space is massive and the table more than sturdy enough to eat meals on. Both beds are most politely described as firm; if you have a crook back you’ll love them, otherwise an egg shell topper is a worthy investment.

The electrical system is simple to use as well. A 240V external plug on the driver’s side with a 15A charger inside or an Anderson plug on the A-frame offer two methods of charging the twin 100Ah batteries. The main switches are located outside in a storage box, while light switches and the battery gauge are inside. Gas and water plumbing are standard with easy to access fittings so getting set up to cook isn’t an issue. While the beds make for a versatile setup, it’s also a big setup. It felt ridiculously overkill for the one night we spent in it at Kangaroo Valley but would be perfect setup for a week on Fraser Island.

The Overland XD is aimed squarely at the family recreation market. If you’re set on aiming your spotlights at some of the toughest tracks in the country with your better half, it’s not the camper trailer for you. If, however, you and your partner are well on the way to starting your own football team and are keen on seeing some of the more scenic parts of Australia this just might be the trailer for you.

On the compromise scale of offroad-ability and comfort, it’s definitely about 80 per cent of the way towards comfort but will be more than capable enough to get you into some tricky situations if so desired.

Due to its bulk and weight you’ll need an appropriate tow vehicle. The LC200 tow vehicle we had barely noticed the weight, but if you’re planning on hitching it to the back of a 3L petrol-powered GQ you might want to take one for a test drive before handing over your hard earned.

All in all, it’s a quality camper at a great price and is punching well above its weight.