There are big trailers, and there are little trailers. Some trailers are comfortable, others are good to tow. The tricky part about finding the perfect camper trailer is that, often, when you want the comfort and usability of a bigger trailer, you might be heading through places where a smaller, more compact option is better suited to the terrain. After all, there’s more to picking the right trailer than looking for one with the cheapest price and flashy colour scheme.

When looking at the line-up of trailers at EzyTrail’s Sydney showroom, an unlikely candidate grabbed our attention enough that we had to have a closer look. The Stirling is its forward-fold range with Z, SE, and LX signifying where it falls in the line-up on specs and price. While the top-of-the-line LX might sound tempting, it was the base model Z that piqued our interest. It’s incredibly lightweight with a Tare of just 1040kg and a compact size due to the lack of large storage areas. Not the kind of stuff that’ll catch your attention if you’re aiming to camp up at the Taj Mahal for a week, but perfect if you’re planning on taking tougher tracks and looking to do it in relative comfort.

So does the reduced weight and size really make that much of a difference? And despite all this, is it still something suitable to hit the road in with a family of four? Well, we decided to test it by hitching it to the rear of our tired 60 Series LandCruiser, load up the kids and taking on the long climb up into the Blue Mountains and down into the stunning Megalong Valley, NSW. 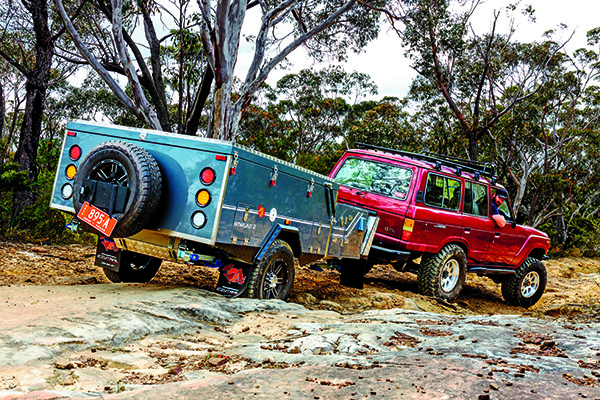 It doesn’t take a rocket scientist to click that more than a few camper trailers at this end of the market share a few similarities, not only in layout but design as well. To that end, EzyTrail has tried to stand out from the pack with deep gloss paint jobs framed by stainless steel trimmings. The galvanising on the chassis was smooth and consistent throughout with a heavy coating of chip-resistant paint protecting the floor pan. High impact areas have been covered with 1.5mm thick aluminium checkerplate panelling including each side of the front stone apron.

Moving into the interior, and while it did seem plain, it was also functional. The flooring is timber-look vinyl, cold to the touch during long winter nights but it does make for easy cleaning in sandy or muddy conditions. Converting the seating area into a second, child-sized bed was an easy process with the table resting on two ready-made channels, although the table was rickety at its full height, thanks to some not-so-accurate adjustment holes. An easy fix but one worth noting. Overall, the Stirling Z has the fit and finish of the more expensive EzyTrail models and it appears the cheaper price is a result of the more compact design rather than cutting corners on quality.

Let’s not sugar-coat things here, the whole point of the Stirling Z is a compact and low-weight camper. If you’re on the hunt for a camper big enough to bring along a full-size barbecue, you’re looking in the wrong place. In the main box, storage areas are limited to what you can fit on the floor. It might not sound like much but we were more than able to fit all our bulky items like pillows, quilts, and sleeping bags into the space. The door can be opened while the trailer is closed so loading and unloading isn’t that much of a drama. Under the seat cushions there are various compartments that will take smaller items. The rear-most seat houses the kitchen underneath as well as the electrical panel and 100Ah battery; there is room to slot in an inverter in this section and possibly a second battery with some careful mounting. There are storage compartments down both flanks, too, although you will have to dodge the wheel arches, so are best looked at for long-term storage of items like spare parts rather than day-to-day needs.

Up front the storage box is from where a lot of the size has been cut but it still has the large fridge slide the high-end models have that will hold up to an 80L fridge. There’s a large storage bin on the opposite side, which will be taken up with the annexe and awning when not in use. A smaller storage section behind houses the poles, with room for a small tool bag with pegs and ropes. Like most of the models in this range, it can be optioned with a boat loader to increase storage space.

The Stirling Z isn’t exactly aimed at the hard-core, go-anywhere crowd but it does cope surprisingly well. The diminutive size and low weight is what originally caught our attention with the view towards a more capable and easier to tow trailer, so we were eager to actually punt it through some tougher tracks. Hitched behind the lethargic 60 Series Cruiser, we pointed the nose at our secret test track with plenty of deep ruts, side slopes and loose shaly rock steps.

The suspension was definitely a bit stiff, like the spring rates would be more at home in the larger models, which resulted in the hitch doing most of the articulation. That said, it towed easily through the track with plenty of ground clearance throughout and most vulnerable components well protected. It’s relatively low centre of gravity, compared to most ‘serious’ models, meant it felt stable and happy to follow where it was led, rather than being something separate to consider on line selection. If EzyTrail released a more offroad-orientated Z, a few inclusions like larger tyres, bigger brakes, and more extensive checkerplate work would be a bonus. All in all, the Z performed flawlessly through the track and we’d feel confident taking it through tracks a standard vehicle could never dream of.

It’s all well and good for a trailer to look the part, meet the budget and work offroad. All that can be done with a tent. The ultimate deciding factor for a camper trailer is obviously the camping side of things, get that wrong and it’s all over. So how does the bite-sized Stirling Z stack up? Surprisingly well, although with a few minor setbacks.

It’s got all the gear you need to spend weeks at a time remotely. There’s a full stainless steel slide-out kitchen in the rear with twin 9kg gas cylinders up front, although bench space is limited (checkmate compact size!). It’s got the expected kitchen sink, which is hooked up to an electric water pump and into a 100L water tank mounted underneath. There’s also twin jerry can holders up front for an additional 40L of capacity on extended trips. The electrical system is bare-bones with a single 100Ah battery powering the lot, there’s also LED lighting throughout with a 12V power outlet and twin USB outlets. For extended touring, you’d want to tick the options box for the 160W solar panel system, 240V inverter and one of the various Redarc charging systems.

Setup was quick and easy; on our first attempt and with children ‘helping’, we still had the main body of the trailer setup and ready to sleep in under five minutes. The bulk of that time was spent adjusting the four legs to get the trailer level. The including awning added another 10 minutes to the setup time although with practice could easily be cut in half.

Inside isn’t large enough to cook in so should be looked at entirely as a living area or small meals room. The bed is quickly assembled for kids but at roughly 5ft-long won’t suit teenagers. A privacy screen for the main bed is a welcome inclusion as is the separate LED lighting. The mattress, however, did feel like karma extracting a debt, so would be top of my upgrade list before taking on any extended trips. All in all, we were impressed with just how easy the setup made camping, especially compared to a rear-fold. There are improvements that could be made but for the price it is to be expected.

The Stirling Z isn’t going to be for everybody. If you’re taking on thousands of kilometres of blacktop and scrounging for every inch of storage space, there are far better models suitable for your needs. If, however, you’re after a trailer that’s light and compact enough to drag through most terrain and still have enough room to spread out with the family, it’s definitely worth a look in.

EzyTrail currently aims these as a budget offering and something that can be towed behind soft-roaders, but we can’t help but feel they’re on to a real winner here. A little more height with some bigger wheels and brakes would have this a serious competitor for the current crop of go-anywhere trailers, and do it for around half the price.