Way back when, well, at least a decade ago, nearly all camper trailers were fully manufactured in Australia. That has changed greatly over the years, with many shifting to full Chinese manufacture. However, a large number of importers and manufacturers like Brisbane-based Wild Boar have discovered the benefits of manufacturing some of the major components in China and having some of the assembly work done here in Australia.

Having components made in different countries is not an unusual approach, indeed, it’s one taken by a number of major car manufacturers throughout the world and even Australia’s caravan and motorhome industry does it to some degree.

For Wild Boar, there’s a great benefit in getting the fit and finish done to its satisfaction without the necessity of a constant presence in an overseas factory. Proprietor Paul Burton is a spray painter by profession, so all his camper trailers come with a top-class paint job and there are certainly some stunning, eye-catching colours available. 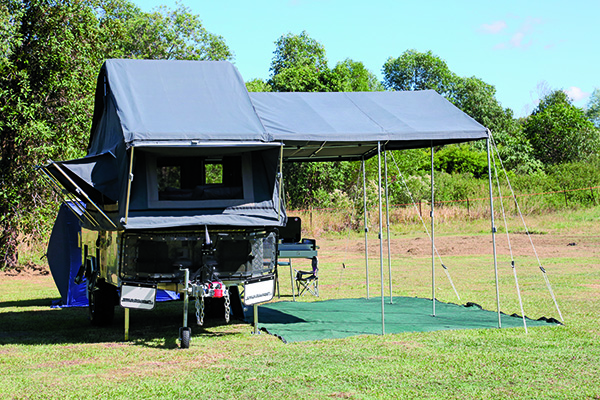 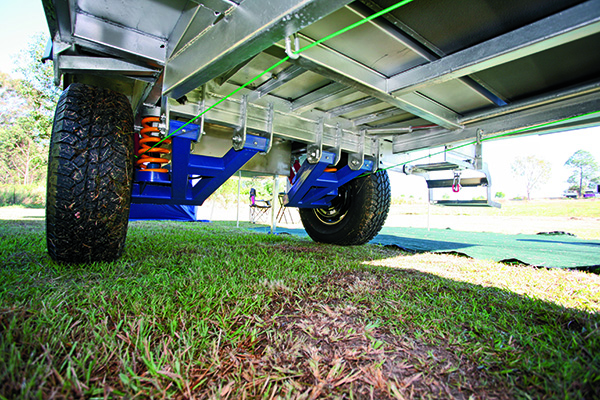 Wild Boar has several camper trailer designs available, among them a rear-fold and an unusual rooftop camper but, for this review, I opted for the Razorback Forward Fold. Like all in the Wild Boar range, it’s based on a 100x50mm RHS hot-dipped galvanised chassis and drawbar. Above the chassis, the inner frame and body sheet panels are also galvanised. Being designed as an offroad camper trailer, it rides on independent suspension fitted with trailing arms, coil springs and twin shock absorbers. The 16in alloy wheels and offroad Cooper tyres give the Razorback a very purposeful look and good ground clearance to boot.

A notable feature of this camper trailer is the considerable amount of storage space, especially the large storage boxes on the drawbar. Slide-out drawers are fitted all round with the front nearside bin designed to take at least a 65L chest-style fridge or some 80L models. On the drawbar are two 4kg gas cylinders and two jerry can holders, while at the rear, the purpose-built bracket can hold either two spare wheels or one spare and two optional jerry can holders.

Being a forward-fold design, setting up the Razorback camper in its basic form is a simple matter of unclipping the trailer top and winching it over. That brings the main tent, including the tropical roof, over and into position. Additional space under canvas is supplied by the 2700x5500mm awning, which comes with a full set of walls. For a quick overnight stop, a 2000mm awning is also included in the overall package, as well as a shower room as an added extra.

All the screened windows have internal and external flaps and, except for the nearside, all have their own awnings. To improve space perception within the awning area, the internal wall can be removed. Awning insect screens might be needed, of course, depending on the time of year and your destination.

Under the main tent, the layout is neatly split in two, with the front area being the bedroom and the rear containing a low club lounge. Setting up the bed does not take long at all and it comes complete with all-round windows and an LED strip light across the rear wall. Clambering in and out of bed isn’t too difficult, courtesy of the adjacent seat. Like the bed, the U-shaped lounge has all-round windows, as well as a freestanding table that can easily be stored if it’s not needed.

A consequence of the forward-fold design is that the seats are somewhat low but, for just a couple of people, there is room to stretch out. The flatscreen TV can be mounted in the rear corner and, thus, be quite easily seen from either inside or out.

Still on entertainment, the radio/DVD player is fitted into the bench seat end by the entry door along with two 12V sockets and a 12V sub switch panel. It’s a slightly awkward location if you’re sitting inside the camper but very handy if you’re standing outside, so it’s an acceptable compromise. Two more 12V sockets are fitted into the seat base by the bed, so there’s no shortage of those but, in all cases, charger leads would have to be positioned so as not to be trip hazards.

There’s nothing like a good kitchen when camping out and this stainless steel slide-out works very well indeed. It comes with a sink, three-burner cooktop, two drawers and a hinged shelf at the rear. For convenient night-time use, there is also a gooseneck LED light. In addition to the kitchen bench, there is the option of having a swivelling barbecue that fits into a front bin, although that wasn’t fitted to this camper.

I quite like a forward-fold setup, it sort of suits my camping lifestyle: having both an internal bedroom and a lounge area on a hard floor means it quick to set up but offers a bit of comfort at the same time.

The general fit and finish certainly appears to be quite good and it’s very well set up for a quick weekend away or something much longer, with just about all the essentials for self-contained travel.