In all fields, there are enduring products and themes that answer to a market need and find a constant home. But changes in market expectations can end such runs of success, unless the product evolves to meet new demands.

For six years now, the Ranger has been a mainstay for Skamper Kamper. In fact, it was the only model in the range when the company was launched. As a basic side-fold softfloor model it met the needs of the market when such campers represented probably 60 per cent of the sales, and while it went through initial upgrading – going from a round tube axle to a beam unit, moving to a mesh stoneguard, fine-tuning the tent and other smaller items – it has remained pretty much as originally introduced in 2010.

Skamper Kamper now finds an increasing market share with its imported forward-fold (Dingo) and rear-fold (Gecko) models, as well as its locally-made Brumby light offroader, and while its success is reflected in a move to a huge factory unit, warehouse and showroom complex, the company wasn’t prepared to see the Ranger drift off into a gradual decline, hence the Ranger XL. 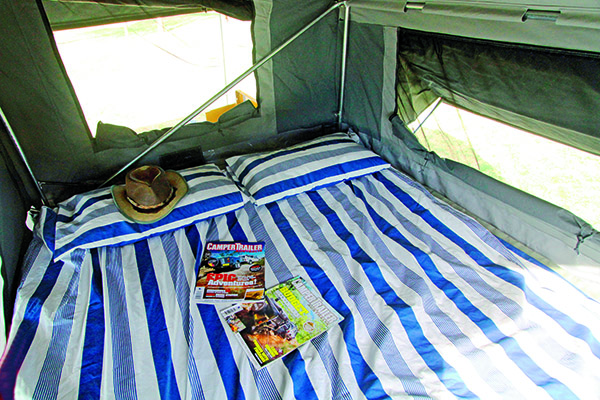 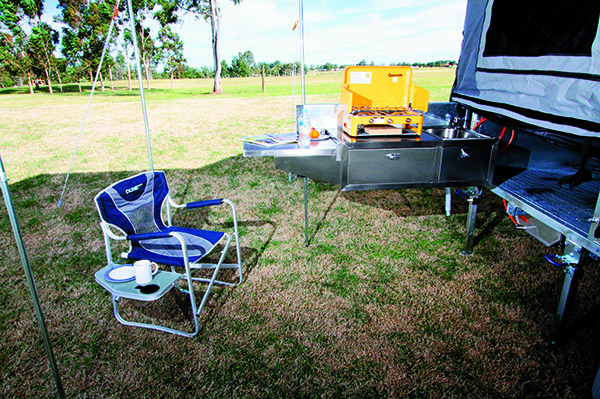 Driven by customer desires, it retains the spirit of the old Ranger, but with many former options now standard along with a few structural changes.

The new Ranger is built on a longer 100x50x3mm chassis. The main frame rails run unbroken from the hitch to the tail-lights, giving it good strength. The added length provides room for additional units at the front, mainly including a large fridge/storage box combo. Happily, this hasn’t resulted in a dramatic increase in ball weight, which is at 90-100kg, depending on the tent option.

The welding could’ve been neater but it works and, given it’s hot dip galvanised, including the 2.5mm body panels, durability isn’t compromised. In fact, the only metal items not coated in zinc are the aluminium frontbox and the stainless steel kitchen, neither of which are subject to rust.

The campers are imported flat packed and bolted together locally, with easily replaceable parts. Clobber a tree with a guard or box and it can be unbolted and swapped for new.

Skamper Kamper tests its campers out on the tracks in the hands of employees (there are plenty of YouTube videos on the subject), doing the hard yards in tough environments and improving on the basis of that testing. One recent addition being added to the Ranger is a bar across the bottom of the front box to protect the aluminium outer panels from the unwanted attentions of passing trees, as revealed in a recent Cape York trip.

The package rides on a trailing arm independent suspension, with twin shocks and coils and 10in electric brakes on 1.4t hubs with Ford bearings. The wheels are black 15in Sunraysia-style rims fitted with light truck 235/75 R15 mud pattern rubber.

The basic tent supplied with the Ranger XL is 9ft (2780mm floor), which gives plenty of room for a couple or, for an additional $500, a family can go for the 12ft (3780mm floor) tent, which gives room for bunks and for kids to play. The latter also comes with a small enclosed room on the end of the awning to provide a great place to get away from insects, or from the kids.

All canvas is 15oz plain weave, with a 600gsm heavy-duty vinyl floor.

Erecting the tent seemed pretty easy. A one-handed push on the top bow as it lay on the trailer opened it up, with gas strut assistance. Walk to the passenger side and pull out the top bar of the tent on that side until you hear the locating pins click into place. Step inside, pull the outer tent bow out, extending and tightening the four in-built spreader bars as you go, insert the two outer uprights and, if it’s raining or windy, insert the two small uprights next to the bed to give the tent more shape and strength.

For an overnighter all you need then is four pegs at the corners of the tent on the ground. Total time to this stage was about four minutes.

The finished tent has high doors, so even a six-footer (182cm+) can walk in or out without having to duck or worry about hitting their head on the tent bow. The windows have internal and external covers around the bed so they can be altered without having to step outside at night, as well as midge-proof screens.

There is a privacy screen across the front of the bed area. The foam mattress is between a camper-king and queen in size, so it requires king-sized sheets, but many customers apparently buy a queen innerspring and that fits okay. Access is via a three-step aluminium ladder that travels on the top of the camper.

There are few comforts around the bed, just two pockets, one at each end, for small items. If you want a reading light, you can run a lead out through a side hole and plug it into one of the 12V sockets adjacent to the bed end of the trailer.

There is a 2m wide kids’ room available for either tent, with floors, walls and windows.

On the opposite side of the tent is the awning, 4600x2400mm in size on the 9ft tent. This comes standard with three walls, with screens and doors, plus a draft skirt and ground cover. This was surprisingly easy to erect, despite the usual array of spreaders and poles which come with some campers. All poles are 25mm steel for strength.

There is a lightweight aluminised sun roof which remains attached and merely requires a rope at each end to pull the curved fibreglass end supports upright. It is a very effective addition, allowing plenty of air underneath to act as a buffer to excess temperatures.

The kitchen is basic but functional. It is stainless steel and mounted to the tailgate. It has a stainless sink with electric pump from the 90L stainless water tank, and a small locker underneath with a 400x490mm slide inside that suits the optional Gasmate two-burner with grill cooker. It has a 580x480mm flip-over shelf.

Electrically, the Ranger XL comes with a single 100Ah deep-cycle All Rounder battery that with 760 cold cranking amps might one day be able to get you out of trouble if your tow tug’s battery fails. If you want a second battery, you will have to install that yourself, with many customers fitting one in the spare locker on the other side of the trailer.

The Ranger XL is a good package for a young family after a touch of adventure. It has all the basics in a sturdy setup. It’s much more user-friendly than the old side-fold softfloors and, at $10,500 (not including dealer delivery or on-road costs), it is within reach of most. With a five year warranty on the basic chassis/body (12 months on the tent) it should see you make an easy conversion from tent camping to something a little more convenient.