To understand the UEV-490 Evolution, you have to appreciate that it is a hybrid camper that’s somewhere between a camper and small pop-top van. Its roots go back to a time when Conqueror made campers for the South African defence force, before they were customised for the South African public and eventually introduced here in Australia.

Like many others in its range, Conqueror’s Australian team has revamped the UEV-490 Evolution to suit the local market, in fact, this is the second time the Evolution has been given an Aussie overhaul. Its heritage remains apparent though, with the angular Evolution looking distinctly assertive in its military-inspired brown and green livery.

We couldn’t resist testing out to see whether or not the camper was as tough as its rugged good looks promise, so we set a course for a little campsite on the banks of the river via a rough and tumble crossing. And behind our Jeep, the Evolution easily waded and scaled through the water and rocks. 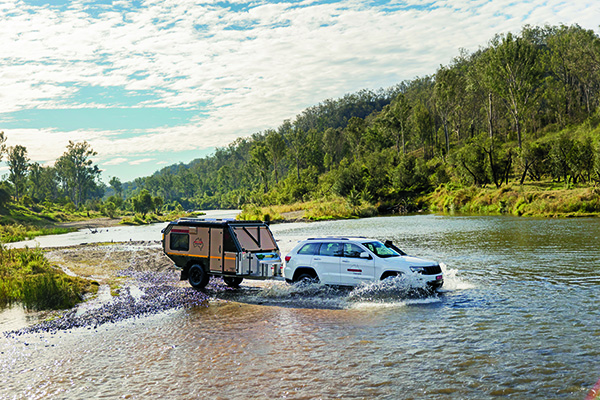 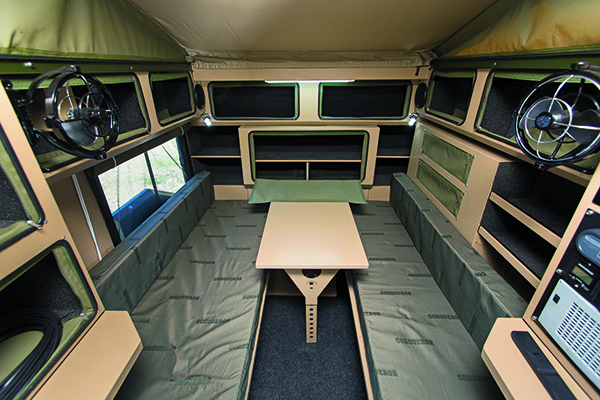 Its 50x100mm hot-dipped galvanised chassis carried its body above independent suspension that includes Tough Dog shock absorbers and Dobinsons coils, which are both well supported and known for their longevity.

We hauled the Conqueror over the sometimes sandy and sometimes rocky river bottom and on to the campsite then up and down a hilly terrain on the camper’s standard all-terrain tyres that gripped the ground without hesitation. And when braking was needed, the offroad 12in electric brakes never failed.

Articulation was assisted by the super alloy coated DO35 coupling. This is a fine choice, given the coating minimises corrosion and its low profile allows excellent rear-door clearance. Equally as important, the coupling allows ample rotation, making manoeuvring across difficult terrain of the sort we crossed easier.

While I seldom comment on the presence of a spare tyre holder, this one deserves a mention. The holder is actually a wheel hub and bearings, adding an extra layer of safety in case of an offroad emergency that involves seized bearings. If that’s not enough, slip off the spare tyre clamp and you’ll find its anodised steel design doubles as a portable barbecue.

In this latest version, it’s good to see that Conqueror has accepted customer feedback by moving the jacking points from the centre point above each tyre, slightly towards the rear for easier access by the side of the road.

Of course, sometimes staying safe means staying clear of trouble. This camper has an impressive departure angle cutting up from just rear of the tyres to the spare tyre holder that significantly reduces your likelihood of getting stuck at the bottom of a steep descent.

Cooking-wise, the slide-out kitchen boasts a good-sized fridge-freezer and comes complete with its own cutlery and crockery in designated drawers and a convenient wash-up stand with hot and cold taps. The cooker is only a two-burner stove though, and for my money, it’d be nice to see a third burner for a little culinary versatility.

On the up side, the mini-bar bottle holder fitted to the kitchen door brings a touch of sophistication to every day camping.

On the other side of the camper is a quality exterior bathroom. Many campers come with an external hot and cold shower, but this area also has a very handy slide-out stainless steel vanity basin. Just open the door, slide out the basin, and unfurl the shower and you’re ready for a luxury morning ablution, camper style.

On the inside of the Evolution, Conqueror provides more than 2m of ceiling height above the entrances courtesy of gas struts that help lift the insulated roof. Regrettably, that head height tapers to just 165cm at the rear.

With the table in place, you have a twin-berth camper, fold the table down and lay down the custom three-part mattress and you’re ready to sleep up to five weary travellers.

While ample internal storage space, interior lighting, a suitably placed battery management and entertainment system together with a carpeted floor make for a comfy interior, the headspace towards the rear of the camper left me a little wanting.

Pragmatists will, however, love packing it up as the camper comes with interior tie-down points and straps to stop stowed baggage sliding about when on the road or bashing through the bush.

Sitting back on the banks of the upper Brisbane River I could easily see the Evolution’s South African defence force pedigree. And in keeping with its name, Conqueror has hinted at further development on the way. Whatever may come, the UEV-490 Evolution is an already impressive camper trailer that will continue to support Conqueror as a market leader.