In the past decade, the Australian camper trailer industry underwent a significant change when it went from having an almost exclusively local manufacturing base to one where many models are now produced abroad. The quality of the imported offerings varied greatly in those early years, but the standard of workmanship and design in recent years has steeply improved. Now, in line with some of the brands seen at Camper Trailer of the Year 2016, along with the release of other new models such as the Blue Tongue Overland XR, the gap appears to be closing.

The Blue Tongue Overland XR rear-fold camper on review doesn’t break any new ground in camper design, but it has made some great steps forward in quality and functionality.

The basic design follows that of a traditional rear-fold camper. It is built on a solid chassis and drawbar made from 100x50x4mm hot-dip galvanised tube. The drawbar runs back to the front spring hangers and arrives in Australia in one piece for optimal strength, as opposed to being bolted together during assembly which can form a weak point under the chassis. 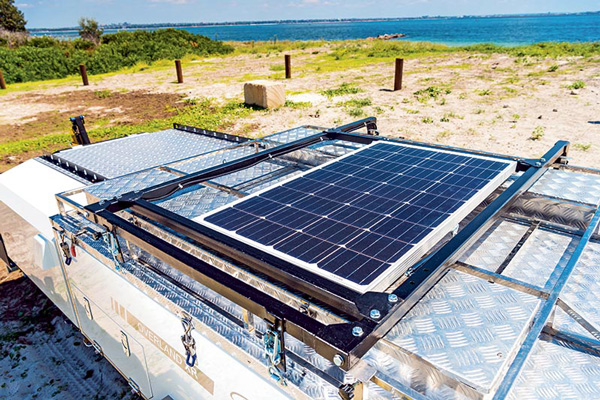 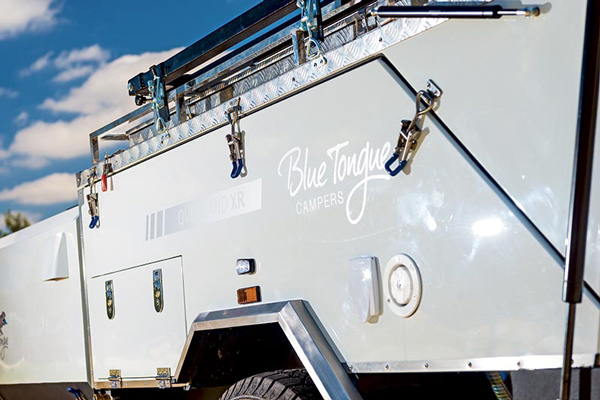 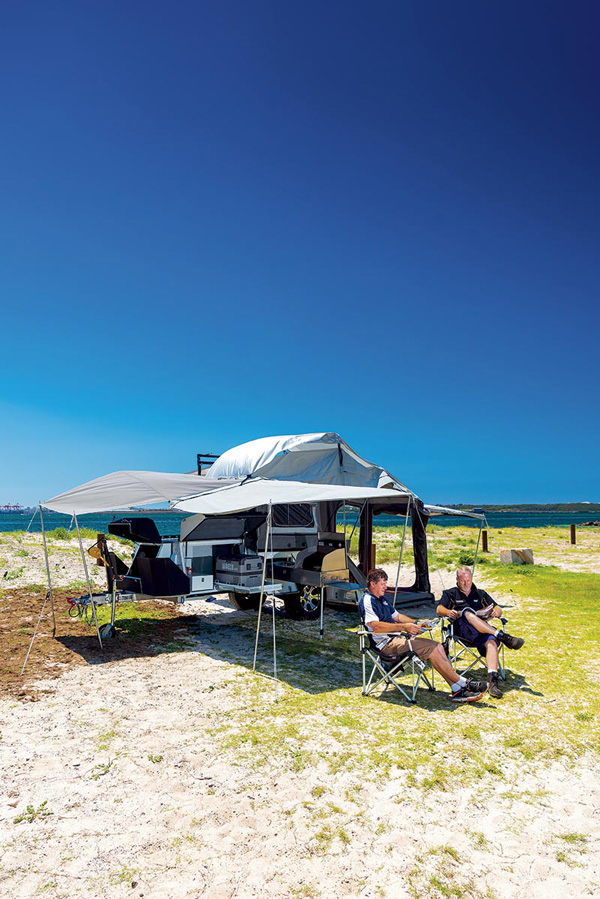 Also under the floor are 100L and 50L stainless steel water tanks, each complete with checkerplate stone shield.

The suspension is a fully-adjustable dual shock trailing arm independent setup with 12in electric brakes and high-load 16in alloy rims. A front winch assists in opening and closing if you feel the need, but the guys from Blue Tongue recommend, and easily demonstrated, the old fashioned lift and pull approach, which places less strain on
the tent bows.

The fully welded steel body is smartly finished in a two-pack off-white with grey highlights and stainless steel trim. It is 590mm deep, which is more than enough to provide for plenty of internal storage and easy pack-up, saving a lot of straining and fiddling around to get the canvas in on the mattress. The side awning can remain attached during pack-up to save the need for its removal and reattachment each time you break and make camp.

The kitchen is all stainless steel and includes a three-burner Smev stove, sink, mixer tap, with a pull-out extension at the end for additional prep space. The kitchen and the extension both require a supporting leg under the end. Under the bench are cutlery and utensils drawers and a small storage space around the base of the sink.

Immediately adjacent to the kitchen is the fridge slide that’s big enough for an optional fridge up to 110L. Next to that is the pantry, consisting of a long 560x150x145mm drawer and two shorter drawers at 400 and 175mm deep, suitable for items such as bottles. All drawers are carpeted and the top of the longer drawer’s cabinet can be used for additional prep space during cooking.

Lighting here is provided by an LED stork light and a smaller side light which provides some illumination in the general area.

Internally, there’s a queen innerspring mattress above four 880x530x100mm-deep drawers, though this configuration may possibly be varied in the future.

On the kitchen side of the bed end is a duct for the heating outlet and, on the other side, are the main control switches, fuses and a battery monitor, which is a bit hard to read as it is angled towards the outer wall.

The floor is a wood-grain laminate that looks easy to keep clean, there is a sturdy fold-down step at the foot of the bed to aid access and strip lights in the peak of the roof and above the bed head. Wall pockets are ideal for storing glasses, reading matter and other small items.

The shower and kitchen, as well as the internal space heating, is taken care of by the optional diesel heater ($2500 for hot water, and $550 extra for cabin heating), which operates from the front driver’s side storage box. It has been assembled from Blue Tongue’s own resources, using smart-looking AN aluminium fittings, as used on race vehicles.

The front storage box, between the coated metal stoneguards, can carry up to four jerry cans, though having carpet around fuel storage seems an undesirable arrangement. The top of the main front storage compartment has a rack so it can be used for firewood or other bulky storage.

The Overland XR is a well-finished and equipped camper, although it did had a few minor issues which could do with some fine-tuning.

That said, Blue Tongue has addressed many of concerns levelled at similar models in its class. And, at a starting price of $21,990 and $27,390 as I saw it, the Overland XR is a good buy.