It seems like Johnno’s Camper Trailers has been around forever. Known for its tough range of campers, the manufacturer is very much part of the local RV scene.

Johnno’s has recently sprung back into prominence with the release of new rear-fold and side-fold models so we grabbed a side-fold X-R15 for review. It retains all the essentials of a good camper trailer but with a few niceties thrown in, including the ‘walk-up’ feature. It’s clear the X-R15 is a popular model; I had difficulty getting my hands on it but, finally, the Johnno’s dealer at Newcastle, NSW, run by Kevin and Sandra Crossey made one available to me.

Taking a walk around the Zincanneal trailer body reveals a number of storage bin doors, all fitted with pinch weld sealing. The front nearside door opens out to the walk-up which, when travelling, offers a chunky storage area and, when camped, gives easy access to the bed. Behind that, the next door opens to reveal a larger sliding drawer fitted into the bay of the trailer. It’s easily accessible whether the tent is erected or not. The two 75Ah deep-cycle batteries are located in the rear nearside bin. 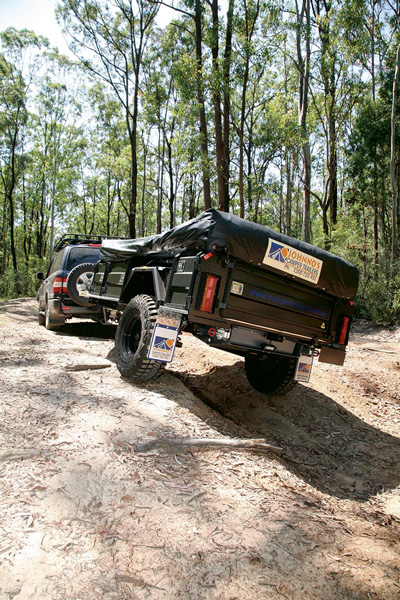 The other side of the trailer reveals the gas cylinder bin, an empty bin and a central bin which encloses the external showering facilities, with a Coleman water heater fitted to the door and a water filler adjacent. And if all that general storage space is not enough, there’s plenty more in the alloy checkerplate nose cone bin on the drawbar. This bin is also a handy mounting point for two Maxtrax and the spare wheel. Gas struts are fitted to the bin, making the lid easy to lift even with the load. Given the effect UV light has on tyres, I thought that a wheel cover would be a useful addition here.

The space above the wheel mudguards is not wasted – a multi-handle shovel is fitted to one side and an axe to the other. Just the things for any offroad camping trip. More importantly, they’re close at hand just as you need them, and not buried under a mountain of gear.

Outside the main tent, the stainless steel kitchen box is fitted to the X-R15 tailgate. It’s a well-appointed unit with a wok burner fitted on to a slide-out, a Sovereign barbecue and kitchen sink that is fitted to a simple bench extension.

In addition to a small pantry fitted with two shelves, it’s quite a well fitted out kitchen. Naturally both the 12V pumped water supply and the gas have to be connected up but that is all relatively simple.

The awning covers the entire kitchen, and I like how the adjoining annexe wall comes with a window for cooking in poor weather but there’s no room for fridge in the kitchen setup if you wanted one close at hand.

A shower tent that fits near the hot water heater is included in the basic price for the X-R15.

I must admit that I have not looked at a Johnno’s trailer for quite a while but the X-R15 certainly looks to be a great addition to the existing range. Apart from a fridge, it’s fully fitted out for the offroad traveller or anyone who likes to get away from it all.

In addition to looking quite stylish, it’s fully functional with plenty of storage bins, a well setup electrical system and even an onboard hot water service.

Best of all, although it’s a side-fold camper, it really doesn’t take long to set up ready for use, leaving plenty of time for fishing, swimming, reading or just sitting around!