Taipan Campers is new to me, but it caught my attention at a recent caravan and camping show and I was keen to take a closer look. Currently, the company sells all kinds of trailers, including soft and hardfloor campers.

The whole range is aimed at the budget buyer, so I thought I’d inspect the entry-level model, the Taurus. It’s a side-fold softfloor camper, capable, in my opinion, of handling rough-road action, however, Taipan goes one step further and says it’s made for ‘full offroad’ work.

As it is a softfloor camper, setting up the Taurus takes some time. Lower the corner stabilisers, remove the poly-vinyl cover, drag off the canvas, extend and erect the internal bows and poles and you are more than halfway there. Rip-stop canvas (14oz) is used for the roof and 12oz for the walls. I was intrigued by the unusual tropical roof, but Taipan reckons it works just like a more conventional arrangement. 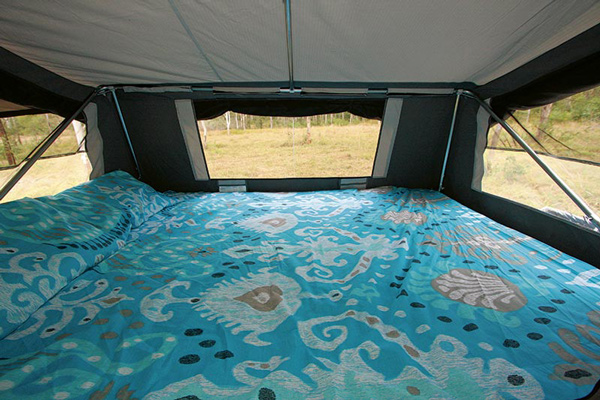 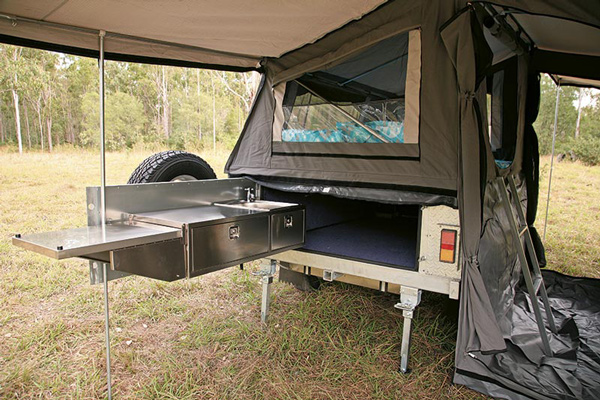 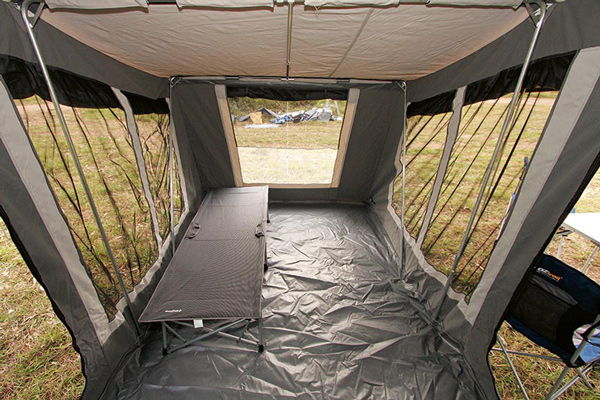 Measuring 5200x2150mm, the tent is quite large: certainly big enough for two single bed stretchers for guests with room leftover to move around. Equally generous is the screened window area – no problem with catching a wafting breeze on a hot night. There are doorways on both sides, with the non-awning side suitable for the included 3400x2150mm kid’s room area.
At the trailer end, the bed area has screened windows all round and has a zipped privacy screen on the tent side as well, which can be left open. The bedroom windows have no flaps on the inside – so if you need privacy or protection from wind or rain in the middle of the night, then guess who’s getting out of bed? Access to the 2100x1700mm bed is fairly easy, courtesy of the two-step ladder but I think wider steps would be more comfortable for bare feet. From inside the tent area, two zipped and screened flaps give access to the trailer sides.

Outside the tent, the under-awning area measures 5500x2300mm offering sufficient coverage for the stainless steel tailgate kitchenette that comes with a sink, cold water 12V tap and an extension flap. No cooktop/griller is supplied but that is a very easy retro-fit. With the kitchen in position, there’s still plenty of room for tables and chairs. Full walls can be fitted to the awning if required and when they’re not being used, they can be stored conveniently in the trailer base.

I could list all the things that a budget camper such as the Taurus comes without but, given the price of less than $10K, you’re getting a considerable amount of bang for your buck. You get a camper trailer that’s comfortable to tow on unmade tracks with all the basics needed for a camping holiday, including a good amount of living space under the canvas.
Extra items that are needed can either be added or funded when the budget allows. In short, the Taurus fills the description of a budget camper trailer very well indeed.