Ultimate has been one of the premium brands on the camper trailer market for two decades, founded on excellent design and engineering, and proven credentials in pretty well any offroad environment, as well as on the highway. But despite this popularity, head office discovered some 4WD buyers wanted a tougher looking camper to match their tough trucks. Light, white fibreglass is practical, but does it match your lifted tow machine?

So the designers at Ultimate sat down and began a program to fill that gap, and the result is the new Xterra: finely-tuned, with all features that make the brand so unique and unmistakable.

The repackaged camper comes with a new finish, larger alloy wheels, chunkier tyres, flared guards and an upgrade to the Redarc Manager 30 all-in-one charger system, to give this camper a whole new persona — one with a tonne of attitude. 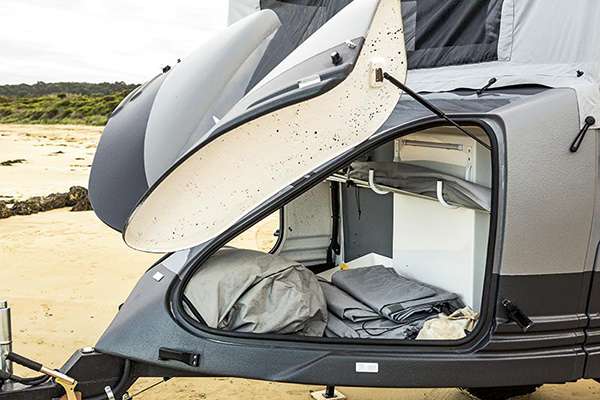 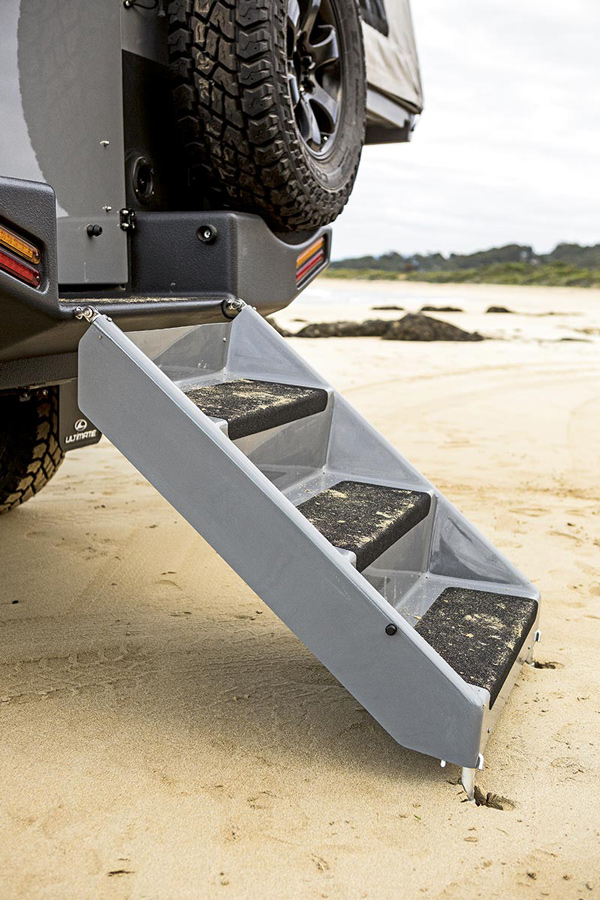 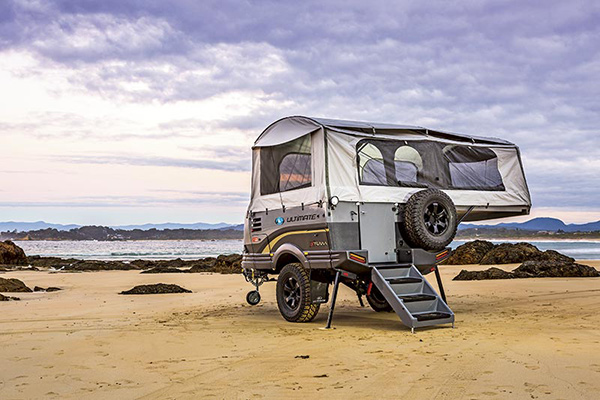 Ultimate campers, right from their origins in the mid-1990s, have traditionally featured a white glossy finish. But the Xterra breaks from that mould with a punchy new Storm Grey and black colour scheme on the exterior of the fibreglass shell. The streamlined look of the Ultimate has always made it a natural resistor to stone chips but this has been enhanced in the Xterra with a wider layer of the Raptor coating around the nose.

The carpeted nose cone still offers the substantial carrying capacity that has marked all Ultimate campers — a total of 1340L of space — including carrying capacity for two jerry cans. And with the side-opening doors there’s ready access to anything in there. An LED light strip provides illumination for night time access.

In the front driver’s side locker sit two 110Ah AGM batteries, all looked after by the new Redarc Manager 30 charger system. This single unit, which travels on the upper back wall of the boot, provides a 30A mains smart charger, a full 30A DC-DC charger to ensure optimum charge through the Anderson plug while driving and an MPPT solar regulator to best use your solar capacity while in camp mode. This is the top-of-the-line in battery charging on the market today.

The Manager 30 also comes with a monitor panel that has been mounted on the front of the kitchen bench inside, so you can check up on the batteries’ state of charge: current in and out, time till full, time till flat and so on. It’s a great system and with all the complex wiring bypassed in favour of a solid state board inside the box, the chance of any problems in the connecting links is gone.

There is a mains input, with dual mains outlets both inside and out (all RCD protected), two USB outlets and four 12V outlets.

Internally, the Xterra retains the traditional Ultimate layout. The top folds over to reveal a full king-size bed, with a U-shaped lounge in front and kitchen along the front wall.

The L-shaped benches in the galley provide for five drawers, appropriate for cutlery and comparable smaller items, one deep drawer, suitable for such items as cooking utensils, a deep cupboard and two smaller cupboards. There is plenty of bench space around the stainless steel sink and two-burner Smev cooktop, with a hard-wired LED light strip above the bench.

The tap is powered, feeding from a 110L tank, and there is a gas hot water system and space heater system available as an option which, when fitted, comes with a mixer tap to make it all easy.

The fridge, after some experimentation by Ultimate, is now a 110L Waeco compressor, which seems more than adequate to handle the task.

The lounge seats are finished in a smart, two-tone soft leather-look material, and they sit above extensive storage space. The floor is covered in a tough marine carpet and with the laminate finishes on the benches it all makes for an easy clean interior suitable for any offroad adventure.

The bed is a little fiddly, in that the three foam cushions that make up the mattress must be placed on the folded-over bed base each time you set up camp, and removed before packing up. While they’re fitted with a cotton sheet-like material and fitted sheets are available, additional bedding – underlay, doona, sleeping bags, blankets, pillows and so on – must be spread out each time. It takes only a minute or two to do, but it just adds that little extra to your time. Other than that, you will get a great night’s sleep, suspended over the neighbouring patch of ground or the kids’ room which can be attached beneath.

The basic setup is quick. It starts with fitting the three outrigger legs. These unclip from their carrying position, are rotated and reinserted into their under-chassis receivers. The jockey wheel is cranked down to raise the back slightly, the rear legs pinned to length, the front cranked up until it starts to lift the nose above level, then the one front leg is pinned, and then the jockey wheel lowered to bring the camper back to level. At least two of these outriggers would seem a necessity, as they stabilise the side of the camper under the bed, which cantilevers out off the side.

Three over-centre latches are undone and the rear steps folded down. From the top step, lift the top over and while holding the centre canvas bow lower the top until it is horizontal. Alternatively, you can use the lifting pole attached to the rear of the top to guide the top over. Either way, it is all pretty easy thanks to the large gas strut.

Step inside under the canvas top and insert the four spreader bars that brace the front and rear canvas bows to the centre bow, place the mattress cushions on the bed, place the pedestal table on its post and then walk around the camper securing the elastic straps of the canvas skirt to the body. The awnings above the two end windows and the tropical roof erect automatically. It sounds complex but only takes a few minutes.

The Xterra comes standard with all-Aussie Wax Converters canvas, including a full awning to shelter across the front of the camper and a small, mini awning which covers just the rear of the camper’s main body to shelter the rear door. Both these awnings can remain attached to the camper during pack up, once the canvas has been used a few times and has softened a little.

As an option, you can add a children’s room which unfolds and then literally hangs from its hook and fastener attachments under the folded-over top, a full 4x2.5m main awning which mounts across the back of the camper and can come complete with walls, door and mesh screened windows, and a full under-bumper skirt to keep the wind from blowing through.

The offroad functionality of the camper is enhanced by its weight, a scanty 840kg Tare with a load capacity of 460kg, which makes it usable with every 4WD on the road and a comfortable package for just about all the softroaders out there that want to at least look like they’re going somewhere tough.

The ball weight of just 45kg is also excellent, and the great 570mm ground clearance gives an exceptional departure angle of 32º and an 18º ramp-over angle.

The Ultimate Xterra is an extension of a proven concept that works. Almost all good campers are founded on a steady evolutionary development, a careful refinement of known good principles, and that’s what we are seeing here. It adds a few extra wrinkles to enhance a great reputation and a look-tough finish to assure those who want to see more dirt than asphalt that this is a camper that can take it.

It’s good to see that Ultimate was interested in our feedback and listened to what we felt were good arguments, and have made a few changes as a result. That’s another mark of a good manufacturer.

At a price of $57,200, as we saw it, it’s a pretty good package that not only will take you just about anywhere – as Ultimates always have – it now also looks the part and that, to some, can be just as important.

Check out the full feature in issue #912 September 2015 of Camper Trailer Australia magazine.