Australia would have to be one of the best 4WD touring destinations in the world. There’s everything from the wide open deserts of the red centre to the snowy mountains of the Victorian high country, not to mention more than 35,000 kays of the most pristine coastline in the world!

So, we’ve established there’s plenty to do and see on this island we call home, but trust me, making it to anything worth seeing and back again in one piece is another story altogether.

The most spectacular parts of our country can really dish out some serious punishment on you and your equipment, and when you’re a long way from home with your family on board, you’ve really got to have full confidence in your camping setup. 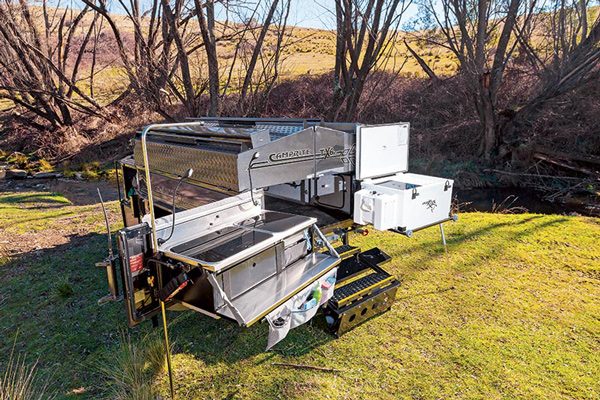 That’s exactly where Camprite comes in.

I’d be lying if I said I haven’t been biting at the chain for a chance to test one of these bad boys out. I mean, have a look at them – they’re a pretty schmick bit of kit! As tough as they look, they’re actually designed with the whole family in mind and, with the ability to keep six up and off the ground, I reckon they’ve hit the nail on the head, too.

So let’s run through the benefits of this particular design. First up, there’s plenty of internal storage space via the cupboards located under the lounges/beds, which are nice and easy to access from inside and out at any time. There’s also plenty of room to move inside, while the high ceilings give the tent a nice and spacious feel throughout. Sleeping arrangements are pretty functional too; there’s the main bed that folds out towards the drawbar, and two separate kids’ beds that fold out the sides as well. There’s also the option of adding bunk beds and, if I’m totally honest, they’re a bloody good idea even if it’s just to store your bags on top for even easier access.

The cooking quarters are outside; they simply swing out to the rear of the camper so there’s plenty of room. Quality wise, it’s all top notch stuff. The kitchen unit is high grade stainless steel, and it comes complete with a Smev three-burner stove with lid and a matching sink. There’s also a drop-down bench and another swing option bench, too. A 60L EvaKool fridge is also an optional extra, which swings out to the driver’s side positioning it nice and close to the kitchen, while allowing easy access at any point of time, even when the camper’s packed up. What I really like about this setup is that it’s super functional. Everything is easy to use, there’s plenty of storage and bench space, and it all just feels nice and solid. No doubt this camper was built for camping enthusiasts by camping enthusiasts, and it’s no surprise these units are mighty hard to come by second-hand!

When it comes to setting up camp, I say the simpler the better! The TX6’s tent is fairly easy to open up, but I actually thought it would be a bit easier, to be honest. Don’t get me wrong, it’s not hard by any means, but you’ll need to allow yourself a good 10-15 minutes to get the main tent sorted for an overnight stay. There’s no heavy lifting required, as the gas struts take the weight perfectly, but there are a few poles that will need to be fitted and adjusted, which will take some getting used to if you’re setting up in the dark of the night. The awning is nice and easy to get sorted; unlike most other campers, it isn’t a massive big stretch to reach to the top as the stairs are already positioned perfectly. Plus, it’s pretty much a one-person setup, too.

The kitchen takes all of about 50 seconds to open up, and everything else is pretty much ready to go. So, I guess what I’m trying to say is you can have a fully functional camper set up in under 20 minutes that will sleep six and look bloody good doing it; how does that sound?

Those of you who have read any of my previous articles or reviews know I’m definitely not backwards in coming forwards – if there’s something I don’t like, you’ll all know about it! However, I can honestly say this unit really impressed me. In fact, if I had a few extra zeros tacked on to the figure in my bank account, I’d buy one for myself in a hurry!

Overall, the TX6 is a well thought out package that just oozes confidence. So, if you’re in the market for a tough, full offroad camper trailer that’s ready not only to rumble, but rumble in comfort, the TX6 is definitely worth a closer look.

Check out the full feature in issue #92 September 2015 of Camper Trailer Australia magazine.