Over the last few years, every Tom, Dick and Harry seems to have found the hardcore adventure-seeker within, but it’s no secret we like a bit of luxury as well. Many people out there want a tough-as-guts camper trailer capable to tackle the tough stuff, yet savvy enough to have all the bells and whistles. The only problem is, a camper trailer of this calibre will almost certainly cost you an arm and leg. That may have been the case until GIC’s all-new Black Series hardfloor camper, code-named Phoenix, came to town.

GIC, trading as Black Series Campers & Caravans, has seen what the people want and worked hard to come up with a camper that’s not only top quality, tough, capable and full of options, but fits the budget as well. So, to put the Phoenix through its paces it was time to do some real world testing, and what better place to do that than a trip to one of the top low-range destinations in Australia, the Watagan Mountains.

If you’re the type who likes to tackle the tracks hard, you’ll be dying to know how the Phoenix tows offroad, and I can sum it all up by saying it loves the tough stuff. It’s by no means a rock hopper, but it barely felt the corrugations and pot holes thanks to its independent suspension. In fact, I left a carton of eggs in the kitchen drawer and only broke one egg in two days — how’s that for real world testing? When the going got tough, the Phoenix seemed to lap it up. On a few of those steeper off-camber angles, there were several instances where the drawbar and coupling bottomed out, but the camper still felt nice and stable even on slanted angles thanks to the well thought-out independent suspension. 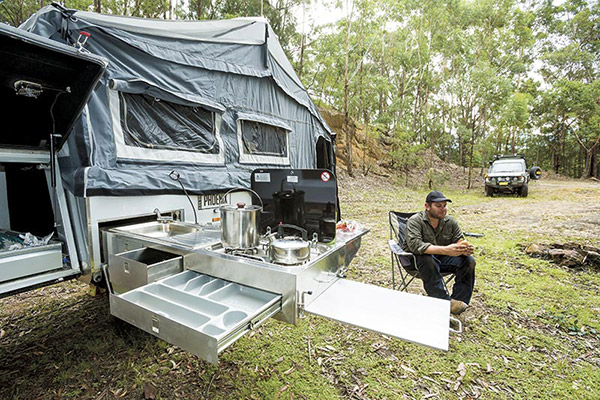 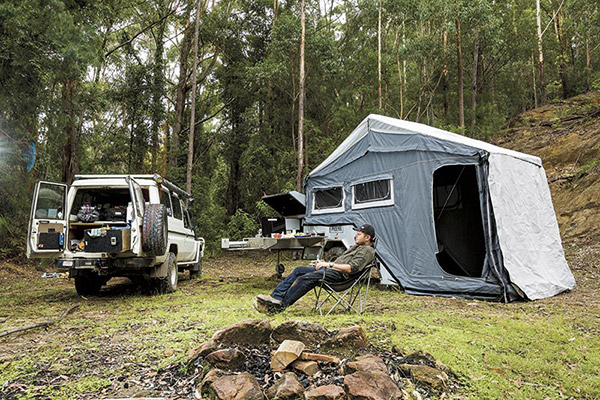 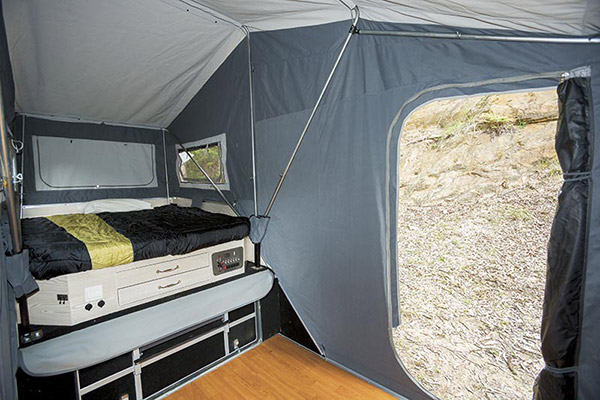 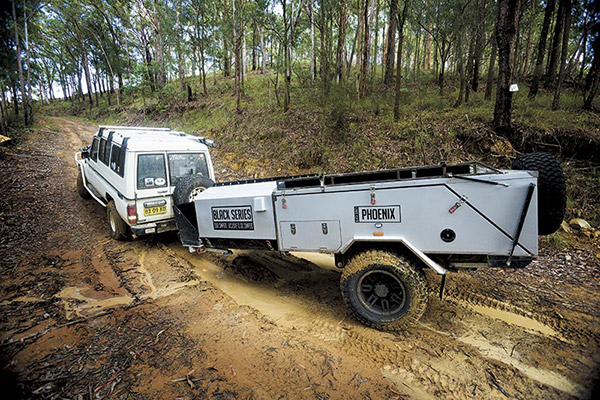 When it comes to the overall balance of the camper, it did feel front heavy. It’s well-balanced left to right, but the massive storage box on the front of the camper holds all of the heavier accessories such as the fridge, extra storage drawers, the hand winch and several jerry cans. The heavy front end put the Troopy’s rear suspension under a bit of strain, which caused the vehicle’s front suspension to unload a bit early on steep hill climbs. This allowed it to skate and scrabble around. I felt as though I was moving a hippo when I unhitched the loaded camper and tried shifting it by hand.

The good news is with a full 100L of water in the rear-mounted water tank, and some careful load distribution at the front, the whole front end becomes much more manageable, although it could still benefit from a lighter storage box.

The storage box at the front completely covers the jerry cans from stone damage, which is great. The extra kitchen storage comes in super handy, and the side mounted slide-out kitchen is perfect for quick roadside stops or month-long basecamp applications, too. And when it comes to comforts, inside you’ll find 12 and 240V outlets and plenty of LED lighting.

There were, however, a few little things that I believe could make the world of difference with a bit of extra thought. First up, the front storage restricts access to the rear of your vehicle. That same lack of clearance meant I had to remove the front hand winch and support pole before travelling, and, being a bit heavy, makes it a challenge when you need to set up the tent in a hurry. The storage tubs on the top lid are a nifty idea to store tent poles and the like, but being mounted up high makes it a bit tricky to retrieve a big, heavy tent pole bag. The fridge slides out right in front of the kitchen, which means you cannot access the kitchen drawer slides at the same time. On the bright side, there’s a surprising amount of usable storage throughout the whole camper, especially around the kitchen.

The last little thing that bothers me is the spare wheel mount, which sticks out the driver’s side of the camper. It’s nice and strong to hold the spare wheel, and allows the wheel to pivot out of the road to allow easy access the rear drawer. However, it can hook on thick vines or scrub as fight your way through tight tracks.

I’ve tested a few of GIC’s campers over the years, and, I’ve got to say, the entire Black Series range is seriously on the next level in terms of quality and value for money. I’m not saying there aren’t better campers around, but when it comes to comparing features and quality for the same purchase price, the Phoenix is mighty hard to beat.

Sure, it could benefit from a few little improvements here and there, but at the end of the day it’s everything GIC says it is — a solidly-built camper trailer ready to go the distance in comfort. For under 20K, it’s hard to argue with that!