Until recently, the absence of a hot and cold water shower wasn’t a deal-breaker in an extreme offroad camper or hybrid pop-top.

Not anymore. Many upmarket camper trailers have gas or diesel-fired hot-water systems, some hybrids offer private pop-up shower tents, and a handful of offroad hybrids have true internal showers.

In my view, to be a real alternative to an internal shower, an external module needs to be quick and practical to set-up for overnight stops as time-poor travellers speed to their ultimate destination. My tolerance allows for no more time than it takes to erect a pop-top and the shower module must be possible to install on a dark, rainy evening, perhaps in a stiff breeze and without pegs or tools. That narrows the field and, if you share my priorities, that should put Australian Off Road’s new Series IV Eclipse Super Camper line-up at the top of your shopping list. 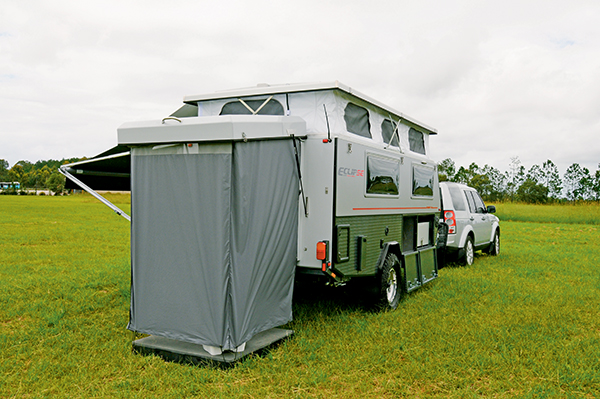 The most obvious way to pick the Series IV Eclipse models is by their new fibreglass Shower Pods, which they wear like small backpacks on their modified rear wall panels.

The pod consists of a top-hinged fibreglass ‘hump’ that houses a drop-down tent within a zip-up internal pocket. In this respect, it’s like others I’ve seen. But AOR’s masterstroke, for which Steve Budden claims credit, is the 15kg plastic shower floor that rides vertically behind the folded pod, and lies flat on the ground when in use, with the tent skirt tensioned to it by elastic cords that hook into tabs.

So, with no pegs or other loose items involved, you can set it up on a concrete pad if you want to and, once inside, stand on a dry, raised base and not in the mud. The best bit though is that once two over-centre latches are released, the entire pod can be erected in less than two minutes, making it a totally practical operation for overnight stops.

If you want to convert the pod to a combined shower and toilet external ensuite, a 10L or 20L portable toilet — such as those made by Camec costing less than $100 — will fit in one of the Eclipse’s two off-side storage lockers when not required. AOR will supply and fit tie-down straps if this is your choice.

The Eclipse has the same chunky ‘bulletproof’ look of its predecessors and the relocation of the spare wheel into a vertical slot between the A-frame rails adds to this purposeful appearance.

The camper on review was fitted with 16in shiny alloy wheels and 265/75 R16 tyres as an option: 17in Sunraysia steel wheels are the standard wear as many customers prefer to run the same wheels, or at least tyres, as their tow vehicles.

Large mesh stoneguards and mudflaps protect the twin 4.5kg gas bottles on one side of the A-frame and twin jerry can holders on the other, while a checkerplate stoneguard across the A-frame adds further stone protection and makes a handy standing space to remove the spare wheel, or wood from the optional front fold-down wood rack.

Underneath the Eclipse is a stoneproof as ever, with its single 140L poly armour tank (or optional second similar-sized tank) and all pipes and wiring located to withstand many kilometres of severe offroad travel.

Without an internal ensuite, the Eclipse appears spacious inside. Its black marble-look kitchen with stainless steel splashback encompasses the camper’s rear and offers generous bench space left of the central stainless steel sink (with mixer and drainage board) and a three-burner glass-topped gas cooktop on the right.

Having a gas cooker inside is a bonus on cold, windy or rainy nights, but under Australian gas regulations it means that the door and the upper roof must have ventilation louvres, in case of a gas leak.

These vents could also let in dust or water, but AOR has thought of this and the latest Eclipse models have a hinged flap with a dense foam lining that folds up and over the door vent and locks from the outside.

Large drawers with twin push-button locks below hold all your essentials for internal cooking, as well as the head unit for the Eclipse’s standard Pioneer AM/FM/CD/USB sound system, which plays through two internal speakers.

A compact but comfortable cafe-style dinette backs up to the galley on the far wall.

External storage space has always been a strong point of the Eclipse — a result of the hybrid’s boxy shape and its fixed, high-mounted bed — and nothing has changed with the Series IV.

The large 500L slide-out storage bin on the right-hand side holds all sorts of things, such as folding chairs, awning mats and tools, while the separate checkerplate locker immediately to the rear of it is the ideal place to store that portable toilet, or maybe a case (or two) of wine.

The model on review features an external kitchen with two-burner Thetford cooktop and fridge, but without it, there would be even more storage under the Eclipse’s standard 3900x2400mm roll-out awning.

AOR’s Eclipse ‘Super Camper’ has been a favourite with serious offroad travellers for some time because of its careful blend of size, features and comfort.

The addition of a novel and quick-erecting rear Shower Pod has made it practical to enjoy effortless comfort even on short overnight stops and will, undoubtedly, extend its appeal.