The new ARMA-XD has taken Armadillo’s range to a new price level and it looked the money from the moment we set our eyes on it.

Finished in powder-coated dark grey with contrasting opening doors, drawers and panels in bright silver checkerplate, it looked exceptionally smart, beautifully finished and as tough as its name.

It unpacks in a conventional way, once the thick PVC cover with its combined zip and hook and loop fastener waterproof seal has been removed. The 3000x2230mm tent unpacks from the left-hand side of the trailer to create the basic set-up within a few minutes. 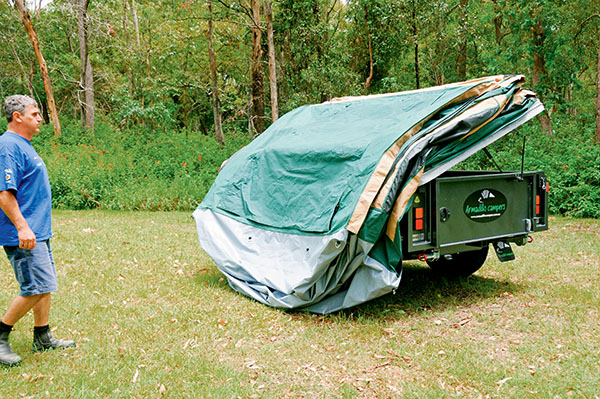 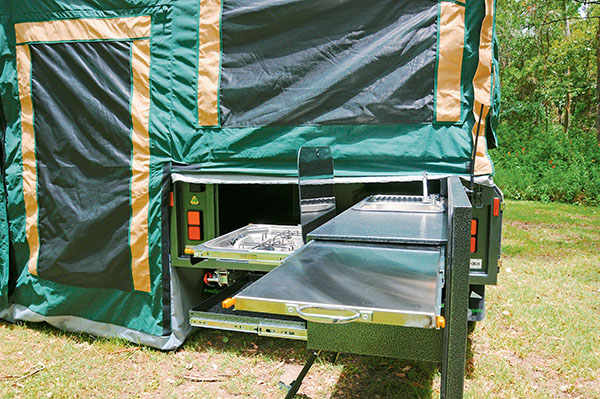 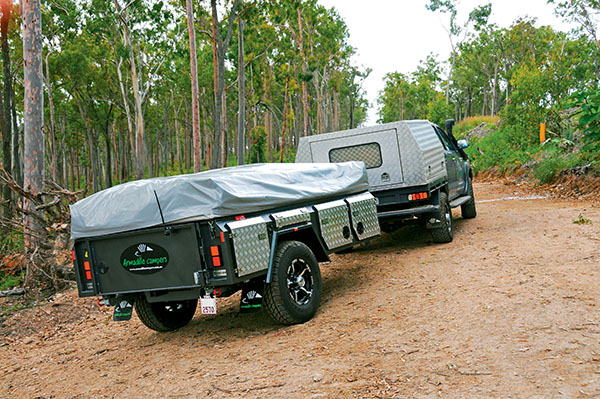 A quality feature of the tent that Troy is proud of is that its 680gsm bucket PVC floor is welded, not stitched, to the Dynaproofed canvas, forming a watertight seal. The floor also incorporates extras-thick pockets for the base of the expandable tent poles to sit in.

Another nice feature is the remote control-operated electric step that glides down from the trailer’s side to give easy access to the bed. As you don’t need to keep your finger on the remote, the step can go about its business once activated while you get on with other set-up duties.

Once erected, the tent offers the great space that still makes softfloor campers a favourite for those who prefer to live under canvas than fibreglass in the bush.

A highlight of the bed is the inviting pillow-top mattress that sits atop the trailer box, which invites the outdoors in with its large zip-down, insect-proof windows.

There’s great storage room under the bed, either through a large hinged access panel in the centre of its base, or via the flaps in the PVC draft skirt that allow access to the trailer’s roomy checkerplate side lockers.

Like most softfloor campers, the ARMA-XD’s stainless steel and checkerplate kitchen, with its stainless steel sink and mixer tap, glides out of the right-hand side of the tailgate. The Smev two-burner gas cooktop then pulls out from under the kitchen, giving perfect access to the entire kitchen from the zippered door of the tent.

Another nice feature is the location of the head unit and twin speakers for the ARMA-XD’s standard entertainment system. They’re located under the left side of the sink, so they’re easy to access by the chef and anyone outdoors.

Underneath, the ARMA-XD is nothing fancy, but perfectly specced for its role as a serious offroad traveller, with Armadillo preferring to use simple, proven technology for easy repairs and maintenance in remote areas.

Standard 16in 265/75 R16 offroad tyres sit on 16x8in alloy wheels and they are supported by Al-Ko axles and heavy-duty Al-Ko eight-leaf rebound springs and shocks.

Al-Ko 10in offroad electric brakes take care of the stopping and with a Tare weight of just 950kg and an ATM of 1500kg, larger and heavier ones aren’t really called for.

The camper’s twin 85L water tanks are well protected with PVC covers, while there are no pipes and wires protruding in vulnerable areas.

There is a lot to like in Armadillo’s new ARMA-XD. It is a true-blue premium Aussie softfloor camper, built by a small and passionate team that understands the needs of its owners and where they will take their products.

With its many clever features, bulletproof finish and high build quality, we think it offers excellent value.

Check out the full feature in issue #87 April 2015 of Camper Trailer Australia magazine.