Australia has perhaps the most diverse camper trailer markets in the world, yet new arrivals Opus has still managed to surprise with their innovation and ingenuity.

The Opus Drifter XT (priced from $19,990) is a camper manufactured in Adelaide by Purple Line Australia to the template of the UK company Opus. This Australian version does not strictly adhere to the English campers drawings. Its Australian, beefed-up chassis and other unique details differentiate it from the British camper. The Aussie Opus is built in Adelaide with 50% local content. The chassis, furniture, tent and electrics are all locally sourced and manufactured.

The founder of Opus in the UK, Jonathan Harris, began working on the Opus concept 15 years ago using inspiration from Australian campers. He saw an opportunity with the growth of “glamping” in the UK — that is, a need for comfortable camping that by-passed the soggy tent, but doesn’t involve the cost, storage issues and weight of a caravan. He saw the concept of the folding Aussie camper trailer as the perfect vehicle with which to profit from this growing market. Mr Harris and the then-nascent Purple Line Australia combined their skills to develop the camper. 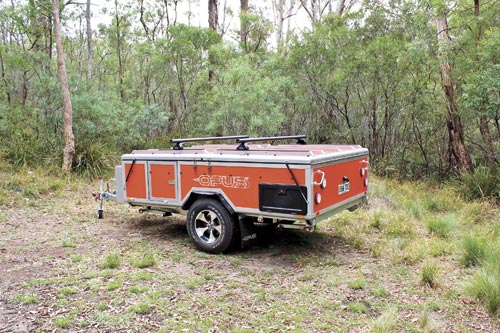 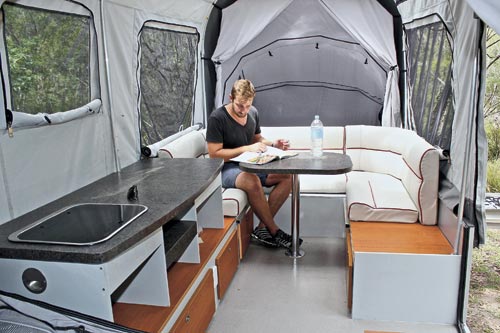 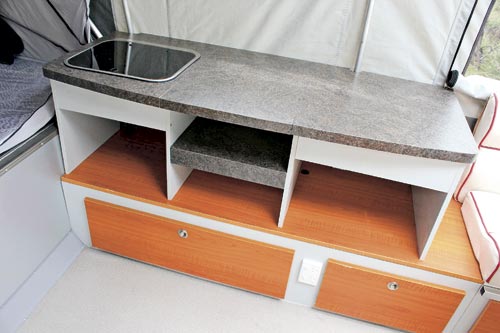 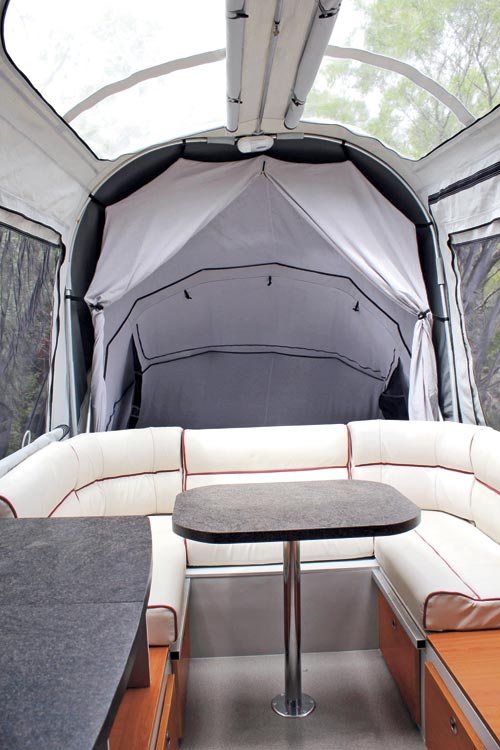 While Mr Harris did follow a familiar theme to the Aussie camper trailer in its chassis and floor/box design, he didn't replicate what he saw in the Aussie market and came up with a unique tent design that drew its inspiration from the least likely source. That source was the old-fashioned pram, with its concertina bi-fold hood.

Opus claim its design is unique and has been received well in the UK market. The Aussie model has been extensively tested locally prior to production, with shake-down tests onroad and offroad. The tent during the pre-production phase spent a year erect in Melbourne to ensure it didn’t leak or deteriorate.

Two models are offered, the Drifter and off-road oriented Drifter XT. Both variants have two double beds with inner privacy tents, a club lounge that converts to an extra bed, a tunnel boot, 12 Volt LED lighting and 240 volt power outlets, a fire extinguisher and awning.

The galvanised steel chassis has an 1800mm long drawbar that measures 100mm deep, 50mm wide and has a 3mm-thick wall. The front lockable storage locker is a neat design, with hinged openings on both ends of the locker. Also, a slide out drawer can be accessed from the kerb side of the camper, allowing heavy items to be accessed without straining your back. There is also a sturdy two-jerry can holder frame just ahead of the storage locker and the coupling is a Trigg polyblock with a handbrake and swing-up AL-KO jockey wheel.

The camper’s simple set up takes about 10 minutes to get the legs down and tent up. The only slightly fiddly things are installing the support legs for the bed fold-outs and tensioning the tent bows inside. It's all relative though — just about all campers need to be stabilised and tents tensioned, and the Opus is not more difficult to set-up than any other camper.

The four drop-down AL-KO stabiliser legs are quality items and are easy to use. Opening up the bi-fold reinforced bed lids is simple, unclip the four over-centre latches that secure the lids and unfold each lid. Then the four bed lids support legs are locked into place and the tent hoops are tensioned inside. With these steps completed, all that remains is to fit the standard awning and get down to the serious business of relaxing.

The step up into the Drifter XT camper is a bit of a reach and as with many offroad campers, owners may benefit from purchasing a small plastic step. Opus is working on an integral fold-down step to solve this issue for the less long-legged of us.

Once inside the high ceiling of the 400gsm poly cotton tent is impressive, but even more so is the natural light afforded by two skylights. They’re covered by zippered canvas flaps that roll up to reveal the clear plastic that, according to the manufacturer, will outlast the canvas in typical recreational use. Windows are zippered and have midge-proof screens.

There’s a double bed at each end of the camper and the shallow tub results in a relatively small step-up to the beds, although the leatherette club lounge does need to be climbed over to access the rear bed. Each bed has two storage pockets but could be improved more with some dedicated reading lights. However the two ceiling lights are complimented by a portable third light that can be fixed in the bed area.

The club lounge is comfortable to sit on and there is not the sense of being wedged in there against the table as there is with some campers. The table drops down to provide another bed.

The bench area is fitted with a plumbed stainless steel sink and storage shelves. An internal gas cooker can be fitted in the bench area as an option. Storage inside is covered off with floor-level cupboards and the 98a/h deep cycle battery and on-board charger are housed in a compartment just to the left as you step into the camper. A low shelf to the right of the door is the location intended for an optional camping fridge.

The four-burner stainless steel external kitchen slides out front the left rear of the camper body. It is a neat little cooker, but cannot be accessed without the rear lid folded out as the bed strut gets in the way. On the opposite side of the camper a lockable storage compartment also reveals the water pump, giving relatively easy access to this item for servicing.

The Opus is a fresh breath of air in a camper-trailer market that, until now, appeared to have done it all.  While we would like to see some improvements to the design (such as cooker access when the camper is closed), at a first glance the Opus Drifter XT  is a competitive new entrant to the $20k camper ground and has a lot of promise.