All Terrain Campers has built an enviable reputation on the slogan: “Go where the others can’t”. Its buffalo-tough trailers have been Camper Trailer of the Year winners on multiple occasions, but like all good manufacturers it isn’t content to sit on its laurels and watch the ebb and flow of a dynamic market leave it in the dust.

Named the Seeker, the new All Terrain trailer sits on the same basic chassis and suspension as All Terrain’s Off Road Deluxe. It is a proven package and in the world of genuine offroad campers is non-negotiable. That gets you a galvanised one-piece drawbar and chassis, square 50mm axle with two tonne hubs and bearings, as well as your choice of 12in two-tonne electric or override brakes and a nine-leaf eye-to-eye suspension with super rebound springs.

At the front there’s the roomy storage box in front of four jerry can boxes, which are sized to also hold your standard firewood bags. The hitch is a heavy duty Australian Trigg coupling but you have the option to change to pretty much whatever takes your fancy. The spare wheel travels upright in the drawbar with All Terrain’s tapered two-piece stoneguard. 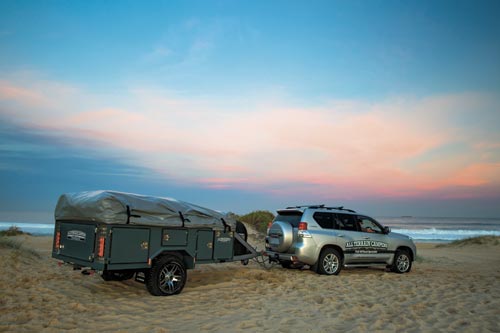 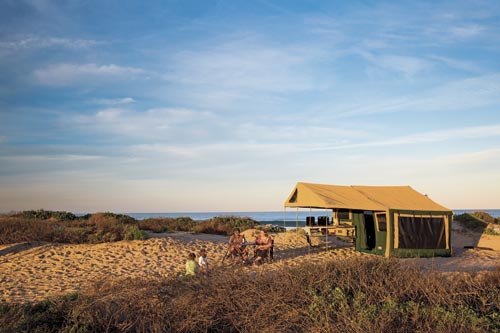 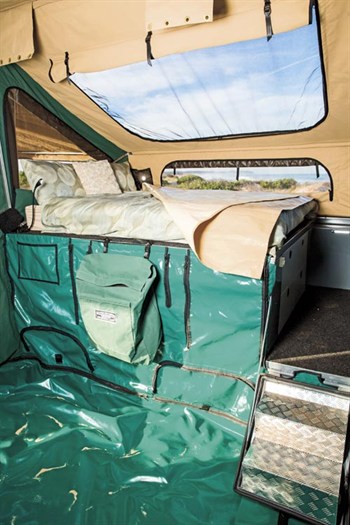 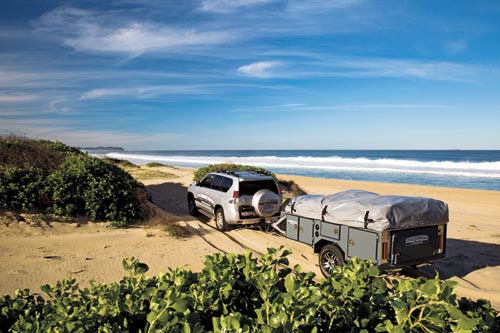 That front storage box is also home to a 4.5kg gas bottle that provides fuel for the free-standing shower tent and its Rio Grande instantaneous gas hot water system.

The great All Terrain ensuite is also included and has a two-piece support pole that fits into a bracket on the drawbar. From it hangs the heavy duty UV stabilised vinyl tent, which has the advantage of being non-translucent so that if you’re showering at night with a light inside you aren’t producing any unfortunate silhouettes on the walls.

Electrical power comes from dual 100Ah AGM batteries, 20A smart charger, 400W pure sine wave inverter, volt meter, and an optional DC-DC charger if your tow vehicle has a low voltage alternator. The camper has five 12V outlets as standard — two at the bed, two at the kitchen and one for the fridge.

The three-burner Smev cooktop and large stainless sink goes with a chrome electric tap, and a fold-down front shelf to assist in food preparation. There are three drawers for the small items, assisted by two marine carpet-covered steel pantry drawers behind the 80L Waeco fridge, which is mounted on a swing-around mount so that everything is within easy reach.

Both the fridge and the kitchen roll on lockable ball bearing slides so that they are smooth and sturdy and do not require supporting legs or other props.

Internally, the bed is a full queen innerspring mattress, with LED reading lights either side, in front of the 500mm wide walkway. Here there’s an LED light with four joinery constructed lockable drawers that move on sturdy slides so you don’t have them falling out if you pull them out too far. Access is via sturdy steps that do not sit on the floor so you avoid the risk of damaging the vinyl.

There are windows all round the bed with internal opening and midge screens. The bedside window has a small sub-awning to shelter it. In the tent area there are two large doors, with a high entrance step.

The Seeker moves All Terrain into that upper echelon of camper trailer manufacturers that are tapping the market for the discriminating camper, who want comfort as well as total self-sufficiency in their camper trailer and the assurance that no matter where you are, or where your camping whims take, you that you can do it in confidence and style.

We think it also marks out the future path for this well known Sydney brand away from the cheap-at-all-costs market and into the realms of those built to a standard, not a price.