Here’s the scenario: you love camping but have been looking to upgrade from your tent to the greater comforts of a camper trailer. Wise move! You’re into a range of different destinations, from the long-time family favourite caravan park down the coast to hidden gems buried deep within labyrinths of 4WD tracks, and everything in between. Your budget is somewhere around $10k, and you want to start with a strong base and preferably an Australian-made trailer. You don’t necessarily need a long list of extras, after all you’ve already got a whole bunch of camping equipment from years spent in the great outdoors. Besides, you can add luxuries and toys down the line as the budget allows.

If this sounds like you, read on, because the Van Cruiser Off Road Camper 9 might just be the one you’ve been searching for. Light enough to be towed easily by a mid-sized family car or small SUV, it’s also got enough offroad cred to confidently leave the tarmac behind. Oh, and you’ll be coming in under that $10k budget.

Based in Carrum Downs in Melbourne’s South East, Van Cruiser designs its campers in house and has its trailers made locally. The lovely people at Van Cruiser gave the Off Road Camper 9 a three-day leave of absence, so we hitched it up to CTA’s Pajero and headed west on the Hamilton Highway, past the spectacular Southern Grampians, through rolling green countryside all the way to the veritable 4WD playground that is Robe and Beachport, SA. You see, we’d been searching high and low for a destination for CTA’s next Offroad Camper of the Year awards and Robe was on our radar, so we’d gone to scope it out. 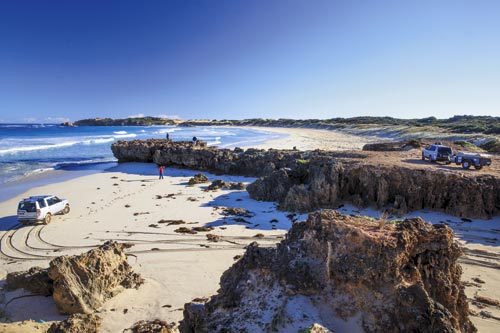 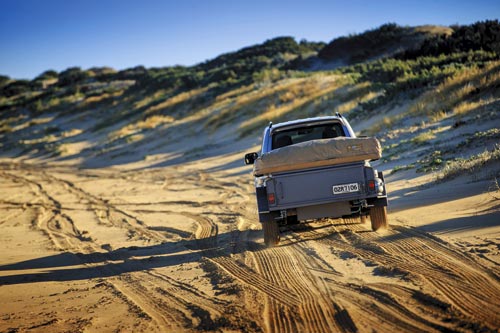 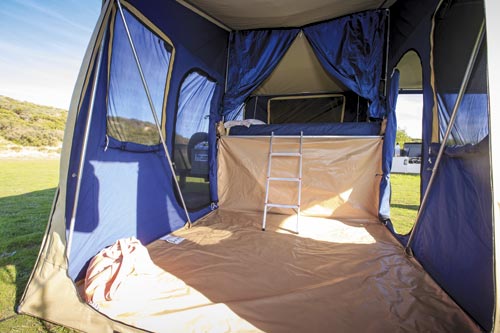 Based in Carrum Downs in Melbourne’s South East, Van Cruiser designs its campers in house and has its trailers made locally. The lovely people at Van Cruiser gave the Off Road Camper 9 a three-day leave of absence, so we hitched it up to CTA’s Pajero and headed west on the Hamilton Highway, past the spectacular Southern Grampians, through rolling green countryside all the way to the veritable 4WD playground that is Robe and Beachport, SA. You see, we’d been searching high and low for a destination for CTA’s next Offroad Camper of the Year awards and Robe was on our radar, so we’d gone to scope it out.

Did Robe make the cut? You’ll have to wait and see, but regardless the Off Road Camper 9 was a dutiful participant in our quest, tracking politely behind the Pajero with barely a peep. We were looking for tracks that would challenge the contestants and show our judges what the campers can do, so it’s fair to say the Off Road was shown some rather challenging territory, from sandy tracks undulating incessantly to jagged, rocky terrain, and soft sand on the open beach.

The Off Road’s seven-leaf offroad suspension with eye-to-eye rebound springs easily absorbed the terrain, proving this camper is more than suitable for intermediate offroad work. The offroad tyres fitted to 15in Sunraysia rims walked over the rough stuff easily, but there’s a spare mounted sturdily on the drawbar, just in case. The lockable 55L water tank sits high on the undercarriage and is shrouded in powder-coated steel for protection. It’s not a huge amount of water storage for an offroad trailer, but there is housing for four jerries — two on either side of the toolbox and two down the sides of the trailer. You’ll need to remove the passenger-side jerry before you unfold the camper if you intend to use it at camp, however, as there is no access to the trailer’s exterior from inside the tent. There is housing also for a 4kg gas bottle on the driver’s side at the rear.

The toolbox is of excellent quality, with automotive seals and gas-strut-assisted hinges with greased nipples. It’s a decent-sized toolbox for the trailer, happily fitting the jerries in an upright position.

The coupling is a polyblock hitch, and while there is no handbrake on this trailer it is fitted with electric brakes. The drawbar is a reasonable length for a smaller trailer, and the turning circle could be made even tighter by folding the edges of the optional stoneguard just a little further. It was good to see a strong design and bracketing, particularly in this area of high fatigue.

The construction quality of the camper seems very good, with the steel and welds appearing strong and neat throughout. This quality, Aussie-made chassis is a real point of difference at this end of the market, which is largely populated by imports of varying degrees of structural integrity. If you are looking to buy in this price range, it’s always a good idea to have an engineer look over your proposed purchase before parting with your hard-earned — especially if you intend to take it offroad.

While the trailer itself is locally made, the tent is an imported OzTrail Camper 9 made from 12oz rip-stop canvas, manufactured in China. Van Cruiser is about to upgrade this to the OzTrail Ridgeline Zenith, which has slightly more space. Unlike some imported canvas, OzTrail has a reputation for building quality tents at an affordable price. While we did not endure torrents of rain or any such inclement weather on our trip to Robe (luckily), I can say the tent was quick and easy to erect, and the canvas was neat and taut despite being put up by first-timers. As one who often puts up campers for the first time, this was appreciated.

This tent has an insulated roof, quality zips, fine mesh windows and a sturdy PVC floor, but I’d have preferred if the latter could be zipped out for cleaning. The main tent measures 4150x2200mm and has dual doors and access also through the full-sized window on the adjoining wall, which has its own awning. There is room enough for a stretcher or bunk along this window, but as mentioned the new Ridgeline Zenith tent (not fitted to the trailer on test but soon to replace the Camper 9) has slightly more floor space again, and an optional additional bedroom off the back for extra space for friends and/or offspring.

Entry to the queen-size 15cm high-density foam mattress is via a ladder that hooks into place at any point along the bed. While this mattress is comfy enough, if you intend to spend extended periods of time in this camper I’d be upgrading to an innerspring once the budget allowed. There is a zip-out washable mattress protector, which is a nice touch. The bed area can be separated — sort of — by a thin ‘privacy curtain’, though this seemed to get in the way more than anything else as there is no provision to roll it up or pin it aside; we simply tucked it into the side supporting poles. If the camper were mine, it’d be getting ‘the chop’. The bed lifts with the assistance of gas struts for access to the interior of the trailer for storage.

The camper on test came with optional annexe walls and PVC floor, which are secured in place with relative ease by hook and fastener strips and offer a huge, enclosed living area in which to escape the elements and the bugs. My one gripe with this set-up was that the draft stopper across the tailgate did not facilitate the kitchen, meaning we could either have the kitchen closed and the annexe fully enclosed, or the kitchen open and this area open also to the bugs and the weather. Van Cruiser tells me it does offer the option of altering the draft stopper so it can be sealed with the kitchen open, and why anyone would forgo this is beyond me.

The swing-out kitchen is basic but suitable, with a stainless steel sink and hand pump and a two-burner stove. There is little in way of bench space, but there’s plenty of space inside the annexe for a camping table at which budding sous chefs can chop veggies.

There is no fridge on this camper, again to keep costs down and allow the buyer to use their own fridge or purchase one when finances allow. Van Cruiser tells us it can customise the trailer design to incorporate a fridge drawer if that’s what you want.

Power does not came as standard either, but Van Cruiser will fit an optional battery pack for around $600 that includes a 100Ah deep-cycle battery, four 12V outlets, a fuse and an Anderson plug to charge from your car. Alternatively, Van Cruiser will supply a portable Ark Powerpack if that’s your preference. You would then add lighting as you see fit.

Van Cruiser offers an optional boat rack for your tinnie or kayaks in either a lift-off style or a swing-over item with gas struts, as well as hitch receiver for bike racks, so the toys needn’t stay at home. And with a tare weight of only 570kg and ATM of 1250kg, you’ve got a decent amount of load to play with.

As a budget offering to get you off the ground and into a camper trailer, the Van Cruiser Off Road Camper 9 is an extremely good option. Imported canvas and a modest list of standard gear keeps the price and weight down, but for your money you get a sturdy, Australian-made trailer. The OzTrail tent is more than adequate for offroad sojourns and the extra fruit can be added one by one in order of priority as you and your financial advisor see fit.

At only 570kg tare, this is a versatile camper as suitable for on road touring behind a mid-sized family car as it is for light to intermediate offroad flights of fancy. At a starting price of $8290, it sounds like a pretty sweet deal to me.

The CTA crew took the Van Cruiser Off Road Camper 9 from Melbourne to Robe, SA, in an effort to suss out a location for our huge annual awards event, Offroad Camper of the Year. While I had it under good authority that Robe was something special, the beauty of the place nonetheless blew me away.