Bribie Island in south-east Qld can be a fickle mistress. She offers spectacular 4WD beach driving, freshwater lagoons, WWII relics and breathtaking camping views across the ocean towards Moreton Island, so we knew there was a lot to look forward to on our twin test of Trackabout’s Dakar Extenda and Safari SV Extenda. But Mother Nature made sure we earned it, with creeping storms and showers between scorching sunshine, a rapid incoming tide, and sand so soft it trapped everyone we met at least once, no matter what sort of vehicle they were driving. Yep, Bribie is high maintenance.

The beach driving on the island is typically easy and enjoyable but the access point was churned up and our test day started with Dave Adams from Trackabout rescuing his brother Lane’s Patrol from the ludicrously soft sand — a favour that was later reciprocated. The brothers freed many fellow trapped Bribiers throughout our day, testing the mettle of the two Trackabout offerings already burdened by unpredictable conditions.

Since the Adams took over the Trackabout business in early 2012 the family has leveraged its engineering know-how to maintain the offroad trailer manufacturer’s reputation for delivering quality products at affordable prices. Brothers Dave and Lane hauled a sealed-sided Dakar and open-sided Safari for our test, both featuring an internal walkway to the bed area for easy walk-in access to the queen innerspring mattress. 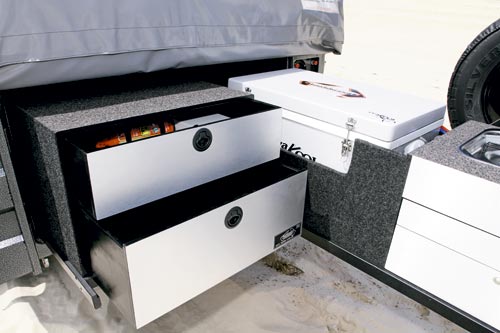 Both the tested Dakar and Safari SV Extendas are designed for serious, regular offroad use assisted by VC’s Cruisemaster independent suspension. The reviewed Safari SV Extenda comes in at $34,990 and the Dakar at $40,490. These prices are the best part of 10K over the respective base model starting points and are well above what you can expect to pay for the company’s entry-level Kakadu, which retails for just $13,490.

The bones of the Safari SV Extenda and Dakar Extenda are ultimately identical but the Dakar features the independent suspension as standard, while the Safari normally features Al-Ko nine-leaf rebound springs. The Dakar has sealed sides keeping the battery, gas bottles and side storage areas protected, and the swing-out tailgate provides more kitchen bench space. Trackabout offers closed-in sides for the discerning camper trailer buyer; it’s a personal choice that depends on where you’re camping, what you’re storing, and how you feel.

We’re testing the best that Trackabout has to offer here, so it was little wonder the Adams brothers were keen to get amongst it on the tough, sandy terrain of Bribie Island. Dave Adams is quick to champion the independent suspension fitted as ideal for those, “who really want to get out and offroad seriously”.

Backed up by countless protective measures, both these trailers are happy to go wherever you throw your 4WD.

The Dakar and Safari SV Extenda trailers are constructed using Aussie made 2mm zinc anneal steel and sealed using a durable powder-coating process. Both units measure 2.7x1.2m and are 5.1m from the hitch to the tail lights. The Dakar has a tare of 1050kg and the Safari SV Extenda has a tare of 990kg. The ATM for both is 2000kg, assuring an impressive payload for each.

The triple 2000x100x50mm drawbar is hot-dipped galvanised RHS as is the chassis, but with 75x50mm rails. The 3.5-tonne OzHitch offroad coupling provides great articulation, while points of contact with road, sand or dirt are via the 16x8in alloy wheels with AT tyres.

Offroad credibility continues with 12in electric drum brakes and the aforementioned VC Cruisemaster independent quad-shock system, which is rated to two tonnes.

“We use four shocks so if one blows you can carry on,” said Dave.

The fully galvanised chassis on both these trailers is a key point in Dave’s mind.

“Chassis that are simply powder-coated are easily damaged by stones and then salt water is your worst enemy,” he said.

“Our hot-dipped galvanised chassis and drawbar will not rust and we’re really big on stone protection too, with the plumbing, sensors, tank and all electrics shielded by deflection plates for serious offroading.”

Bribie Island is a beach driver’s paradise and with a 16km drive north to the campsites, there was ample opportunity to test the towability of the trailers. As expected, the sandy terrain proved no trouble for these solid campers, with Dave and Lane pushing them over the higher bumps and deeper troughs we encountered.

The boys showed great confidence in their products and agreed to all the action photos I requested. The Safari SV and Dakar never looked out of their depth, coming out of the other side of any obstacle with considerable aplomb. Each trailer finished the day as solid as it started, whereas the 4WD Patrols looked as though they’d had a serious workout.

Opting for the ultimate sea view, we set up camp right on the beach to evaluate the trailers’ offerings. The first appealing feature was the Truma gas hot water system, offering that all-important instant heat popular with families and those who prefer to relieve their aching muscles with a hot shower after a tough day out on the road. There’s a 12V pump in the kitchen and a hand pump on the trailer’s side, with a shower attachment drawing from an 85L tank and generous jerry-can storage leaving plenty in reserve: three for the Dakar and four for the Safari.

Aside from the extra benchspace, the kitchens are fundamentally the same in the Dakar and the Safari on review, with the Drifta slide-outs featuring a Smev stainless steel two-burner and classy stainless coatings and black marble-style worktops. The finish is excellent. The available pantry storage is almost excessive, and there’s space for the included EvaKool 60L fridge/freezer.

The two Trackabout models on review provide plenty of juice off when you’re off the grid. A pair of 105Ah AGM batteries stores your power and is maintained by a Bosch/Steca solar set-up with 30A regulator and 120W Bosch folding panels. A Baintech 25A three-stage battery charger is also fitted and other key gear includes a Baintech six-way fuse block, voltmeter in the kitchen, tank level meter and a USB and 12V point at the bed head. There’s even an optional Fusion audio package built into the kitchen to provide some tunes while preparing the day’s catch.

Out test Safari SV Extenda also had a boat rack ideal for your tinnie, firewood or even the kids’ bikes; it simply folds over when it’s time to set up camp.

Two people can set up the tent and awning in 10 minutes, with the bones of the sidefold tent in place in seconds. Pegged and poled in you have your kitchen covered and bed ready, with a substantial amount of living space available inside.

The Extenda part of these models means the handy internal walkway provides an easy staircase access up to the bed so that you never need to crawl over your partner in the early small hours for a call of nature. The walkway also comes with good sized storage drawers, easily accessible and reassuringly sealed.

Trackabout makes its own tropical-roofed tents using 12oz Wax Converters Dynaproof canvas for the walls and 15oz for the roof. There are six large full-length Tentex mesh widows and two wall vents to help circulation, while a fully zippered vinyl floor has a 5in edging to keep the canvas above the earth or sand.

“It’s a bucket-style zip-out floor,” Dave said, “so it can be repaired separately if damaged instead of the whole tent.”

Both the Safari SV Extenda and Dakar Extenda deliver impressive robustness and design quality for the price. You still get a quality product with impressive features at entry level, but if you nudge your spending up ten grand or so — as with our test trailers — you’re treated to a go-anywhere unit with a host of useful toys. Importantly, you can spend any figure in between to option your trailer to individual needs, so there’s a good balance between essentials and what the wallet allows.

In their highly specified guise, our test trailers are ideal for serious offroad travel and, importantly, for extended trips of weeks, months or even years. You know a well-built piece of kit when you see and feel it, and Trackabout’s products excel here. Automotive dust sealing, excellent high-quality canvas and serious damage protection throughout impress.

If only a rapidly approaching tide hadn’t forced an early exit from Bribie Island we’d have had more time to enjoy the chilled drinks and platter the brothers prepared under our canvas shelter. Thankfully, after rescuing a few fellow offroaders, the Trackabouts behind the 4WDs made short work of our return trip over the shrinking sands, comfortable in this environment and I’d imagine just about any other terrain we could throw at them.

It’s hard to imagine anyone more qualified than Rob and Kym Adams to take over the Trackabout reins, following the sale of the business in 2012.

The couple owned a hire fleet of Trackabout campers for eight years, which clocked more than 600,000km Australia-wide. Rob and Kym enjoyed a great relationship with their renters and were keen to share their feedback with Trackabout’s previous owner, helping create the true no-nonsense camper suitable for endless trips through Australia’s often harsh environments.

When the opportunity to purchase the business arose, Rob and Kym simply had to have it; such was their faith in the product.

“Trackabout is not about cost cutting, imported tents or using inferior products to meet a price,” Rob said.

With sons Dave and Lane also involved with the business, Trackabout is a true family enterprise with all involved having great faith and pride in their products based on years of experience. Visit www.trackabout.com.au for more information.

> Less of a price hike over the Safari

> Finish of the kitchen