Last year's Offroad Camper of the Year winner in the $15-25k category, Johnno's came back to battle again with yet another brand new model, the Dreamtime Off Road. This rig is a base model trailer for an entry-level or budget buyer that provides quality materials and workmanship in a functional design that won't let you down when the going gets tough.

It's back to basics for Johnno's with yet another fully Australian-made model. It'll go anywhere your 4WD will go with its rugged but surprisingly lightweight build of only 600kg dry tare weight. The unit provides the essentials, allowing the individual purchaser to retrofit virtually any conceivable option or order it from new - depending, of course, on budget. The whole idea is to make it affordable enough to get you out there. Many purchasers coming up from basic camping alternatives are likely to already have their own accessories such as a fridge, cooker and electronics.

Johnno's started as a hire business some 15 years ago, which has provided the brand with a continual stream of informed customer feedback. Johnno's found the major priority was for ease of set up, and has incorporated this into its design principles. 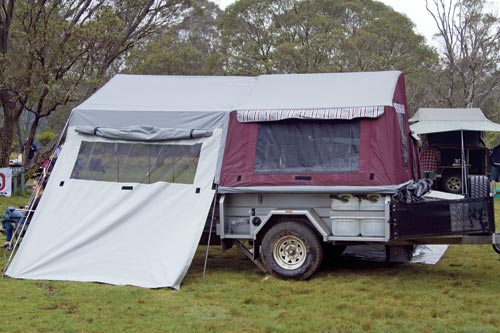 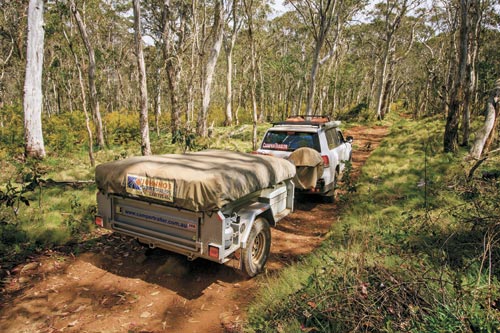 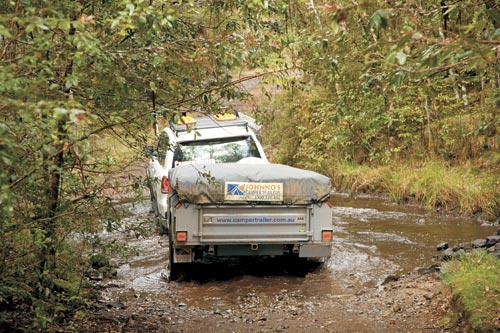 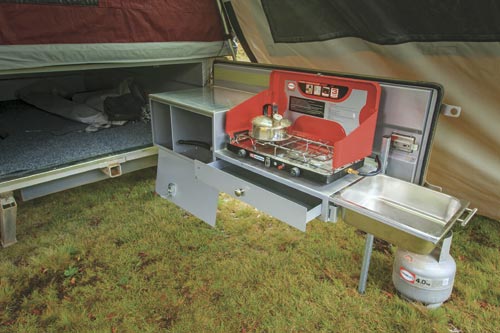 While customers are happy to manage with the basics, the underlying quality must be extremely high to excel in the rigours of extreme offroad exposure. We have all seen lesser quality campers left by the wayside - but certainly not a Johnno's.

The high quality Wax Converters Dynaproofed canvas proved its effectiveness at a cold and very wet Barrington Tops National Park, in which the brand new, unseasoned tent was exposed to almost 48 hours of relentless rain without leaking a drop. No surprise, then, that Johnno's offers a five year warranty on its canvas products. The tent has 15oz canvas on top and 12oz on the walls, while the reflective grey finish provides a surprising amount of heat protection.

The tent has a full PVC floor with zippered sections for access to the huge storage compartment in the trailer. There's more access to the storage under the queen size bed. Not a drama if you're tall, either, as there's tonnes of headroom throughout. A full length zip-on annexe with a wall to protect the kitchen is supplied as standard.

The strong trailer has a full chassis construction with 50x50x2.5mm DuraGal undercarriage, 75x50x3mm drawbar sealed by cold gal on all joints and welds. There is a 60L under body polyethylene tank and a simple hand pump on the side. The trailer has nine-leaf eye to eye suspension, 10in electric brakes, a 45mm solid axle, 80 series six stud hubs and 15in Sunraysia wheels as standard. It's very compact at 4.1m long and 1.87m wide, and is protected by a basic hammer tone finish.

The Dreamtime Off Road's kitchen is basic but functional. It features stainless steel tops, provision for a simple portable two-burner stove, utensils drawer, pots, pans and hamper storage. It has a basic painted sheet metal finish and the drawers and doors lock in the closed position.

Standard equipment includes a 4kg gas bottle, an 80Ah battery (enough for basic lighting and power for a long weekend) and a Sidewinder three-point 12V outlet near the kitchen for interior and external LED lights. Out on the drawbar there is a large lockable front tub with removable wood box that will also hold three jerry cans, plus a mesh-style stone guard, fold-up pneumatic jockey wheel and Hyland hitch. There's also room for two more jerry cans on the side.

The Dreamtime is a wonderful gateway into the world of camper trailers. That's what Johnno's philosophy is all about. We asked company representative Chris what makes him go 'wow' over Johnno's campers, to which he replied, "We never get cranky customers". That just about says it all.

STUART JONES: The Dreamtime has all the basics, and allows those who are on a tight budget to get in and option up as finances allow. It has an unquestioned pedigree as a no fuss product that delivers. The canvas is nice and taught and the design is simple and robust. It really lives up to the rental heritage of the brand. With a 600kg dry tare and rear recovery point, you'll have no problems dragging this anywhere you want to go. In terms of set up, softfloors don't get any easier than this. I would have liked a slightly better sparky system, even if it was only an Anderson plug.

NICK MANNELL: Johnno's Dreamtime is a great entry level trailer that's spacious and quick to set up. Although it doesn't come with a lot of extras as standard, its simplicity is part of the appeal and what makes it so affordable. At 600kg tare, the Dreamtime is nice and light and fitted with a rear tow point, which makes it well suited for offroad. LED lights are used throughout, and there are three 12V points supplied: two are used and one is spare. An electric charging system wasn't supplied with the test trailer (although an Anderson plug is an option) but if you're tight with your energy and water usage, you can go unplugged for a week. There is a hand pump and a 60L tank, but for the asking price water isn't plumbed to the kitchen. The sink, however, is removable from the stainless steel top, and the stove top is easy to use with only two knobs to adjust. I liked the how the internal windows close. It's an affordable, effective way to get out in the bush.

ANITA PAVEY: At only 600kg, this rig is very light, making it an easy way to get offroad and camp anywhere. And setting up is a cinch. There is easy access into the trailer storage and the tent layout as standard. The tent canvas is excellent quality and features a storm flap, and the DuraGal chassis rides on a nine-leaf pack set that's easy to repair offroad. It's an all Australian-made product for a good price with everything the family needs to go camping on a budget.

MIKE PAVEY: Johnno's Dreamtime really meets its intended purpose as a basic offroader. The standard of construction is great, and its light weight and compact length of 4.1m will go places where heavier trailers may struggle. Although built to a modest spec, the trailer is lined, and the bins are fitted with autoseals. The Dreamtime has sharp pricing, plenty of storage and all the essential features. The Wax Converters canvas is a highlight, too.

JOHN 'BEAR' WILLIS: The Johnno's Dreamtime Off Road is a good, back-to-basics camper made with integrity using quality, all Aussie-made components. Johnno's has taken a flexible approach to the Dreamtime; accessories are available in kit form and simply bolt on as you need. Also, it's dead easy to use. Although it'll get you offroad, the Dreamtime as it was reviewed had limited power capacity, only 60L water and no electric pump. It's a basic unit at a realistic price, however couldn't claim top marks for every criteria on the scoresheet. All up the Dreamtime performed really well on our offroad course. It's light and simple, but rugged. For the price, it's a really well-built unit that will provide solid foundations for you to customise as you please. The wise man built his house upon the rocks, after all.

JUDGE'S PICK, ANITA PAVEY: Johnno's has managed to package a completely Aussie-made camper at a family-friendly price. Despite being the least expensive trailer on test, it was by no means cheap, fitted with quality Wax Converters canvas and a strong, attractive trailer. The extra compartment doors on the nearside which provide improved access into the tub wasn't something I expected to see at this price point. Set up was a breeze thanks to a simple 3-bow system, and the bed and tent areas were large enough to house a small family. I liked the vents above the bucket floor that provided additional ventilation. It's good to know there are little Johnno's campers running around the country as hire mules, sustaining punishment at the hands of casual hirers. They are engineered to take that level of brutality, which as I buyer I would find reassuring.