IF THE IDEA of a rugged, go-anywhere family camper trailer gets your pulse racing, 3 Dog's Rover could well be your best friend. Designed for very rough terrain, this trailer offers family-friendly dimensions and a super low towing weight - how does a ball weight of 25kg and a svelte 420kg Tare sound? Such light dimensions significantly broaden the tow vehicle choice to everything from soft roaders to large 4WDs.

In addition to trailers, 3 Dog Camping designs and manufactures roof-top campers and ute-back campers, the latter manufactured from aluminium composite panels. All of the company's products are made in Australia.

Sporting a purposeful alloy body with a dominant tread-plate finish, the Rover is built to take a few knocks without fear of tarnishing fancy paintwork, as is often the case when exploring rarely-used tracks. The trailer box measures 2000x1200x520mm and rides on a galvanised steel parabolic chassis with six-leaf rebound springs, a 45mm solid axle, Sunraysia-style steel wheels and new 235/75-15R all-terrain tyres.

With such a light weight, electric brakes are not fitted, nor are they required as long as the total mass is less than the legal requirement of 750kg. They can, however, be fitted as an option (at an additional cost) if desired.

Up front, the relatively short drawbar is fitted with a DO35 drop-on coupling, spare wheel, jockey wheel and lockable front storage box, but no handbrake. Keeping things simple, the trailer misses out on internal electrics, although a 100Ah deep-cycle battery, Projecta 2700 charger, inverter and 240/12V outlets are all optional. Dual jerry-can holders and 4.5kg gas cylinders and holders are fitted on each side.

A basic kitchen slides from the tailgate and includes an aluminium bench, with upper and lower shelves, Lido Junior two-burner stove and grill, plastic sink and a hand-pump fed from a 70L poly water tank mounted beneath the rear chassis rails. The lockable tailgate door is lined with a substantial rubber seal, to keep dust at bay.

A glance beneath the trailer shows the wiring for the LED taillights is well tucked away and protected by plastic ribbed protective pipe. The same can't be said for the exposed water plumbing, however, which hangs down - making it somewhat vulnerable to rock damage or undergrowth.

I wasn't looking forward to wrangling with 16ft (4.88m) of canvas, but I was pleasantly surprised to see the tent pop up so quickly.

Using some well-placed ropes fixed to the centre D-rings and one of the spreader bars, the floor is levered off the trailer, causing the remaining bows to concertina forward. You then step inside the bucket floor and loosely position the rear upright bars before clipping a spreader bar between the first and second bows on each side. Finally, adjust the poles before stepping outside to peg in the corners.

While the main tent body erected within minutes, the awning over the kitchen took longer to assemble, with six upright poles and seven spreader bars to give the canvas some shape, plus the obligatory adjustments to eliminate the creases. The spreader bars do such a good job that guy ropes are not required in light conditions.

The awning zips to the main structure, although a step of some kind is recommended in order to reach the tent's ridgeline. The remaining annexe walls zip on to create another room without an in-built floor, although a mat would work well to keep the dirt out. The annexe covers the kitchen and measures 5000x2400mm (16ft 5in x 7ft 10in) while offering six windows, two doors and fine insect mesh.

Earning the trailer its family-friendly tag, a kids' room with a sewn-in floor zips onto the main tent beside the drawbar. It measures 3000x2000mm (9ft 10in x 6ft 6in) and features twin windows and doors.

In terms of set-up time, the tent and awning roof would normally take 15-minutes to erect. Add to that the awning walls, the kids' room and all the pegs and guy ropes, and you would likely be looking at anything up to an hour.

Packing up the trailer is equally as satisfying. Once pegs, guy ropes, awnings and additional rooms are packed away, the canvas is ready to come back into the trailer. Fold the floor back against itself and clip the corners together using carabiners attached to the ropes, which are tossed over the roof and used to lever the bows back onto the trailer.

Like the assembly process, the bows all magically concertina together and before long everything is tucked in awaiting the final zip-on cover.

The dimensions for the main tent and trailer are generous at 5000x2200mm (16ft 5in x 7ft 2in). The bed base measures 2200x1800mm (7ft 2in x 6ft) and supports a queen mattress, plus some additional room for pole storage (when in transit) beside the mattress.

The six windows and two doors mean there is plenty of light and ventilation through the camper.

All windows and doors are fitted with fine insect mesh and the windows roll from the inside, while there are PVC covers on the head and foot of the bed to observe the world on those rainy mornings.

Australian-made Billabong Wax Converters canvas is supplied and folds surprisingly easily. Internally, there is a ventilation pocket near the ridgeline of the roof to minimise condensation, as well as a couple of interior pockets near the bed for knick-knacks or bedtime reading material.

Internal access to the trailer is available via a hatch under the bed supported by twin gas struts. A multi-rung ladder provides access to the bed. 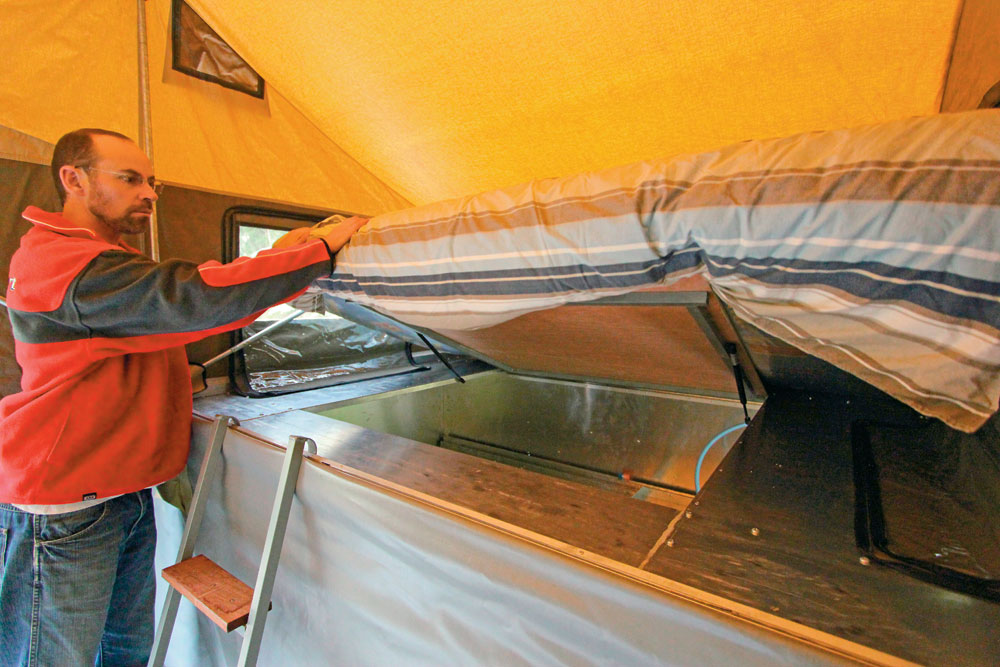 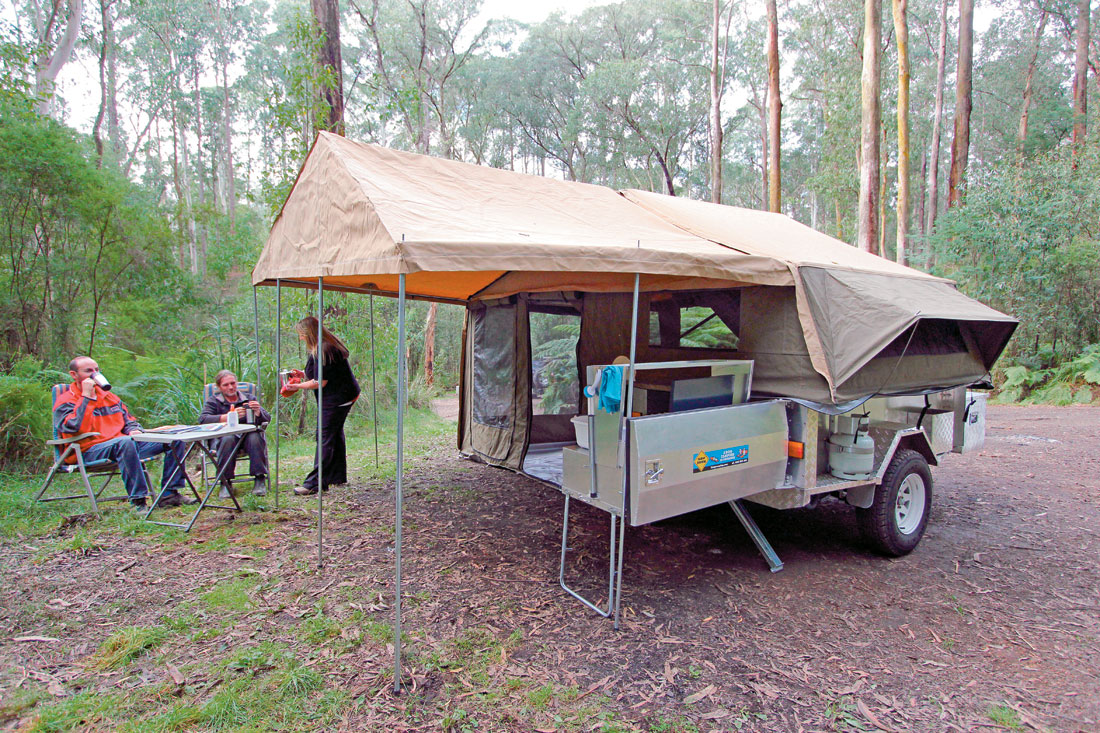 The trailer towed exceptionally well through our test circuit within Vic's Bunyip State Forest, east of Melbourne, where we encountered hilly bitumen, potholed and corrugated forest roads, and narrow bush tracks. The trailer's lighter weight makes it a delight to tow in any conditions, with its existence barely noticeable behind its tug.

With a modest drawbar length, the trailer tracked well, navigating around and over fallen timber, tight switchbacks and muddy sections. Once off the towbar, it was almost effortless to wheel around the campsite or the garage at home.

Other options include a stoneguard, Waeco fridge, hot water, 12V pump and solar. A three-year warranty is offered on the camper, and five years on the canvas.

The 3 Dog Rover is designed for family camping adventures, offering plenty of real estate and a rugged but lightweight build. At $18,500 in base trim, the Rover represents good value, particularly for a rust-resistant trailer.

The only thing it really lacks in standard trim is some added visual appeal, such as some substantial colourful graphics along its flanks and tailgate.

Otherwise, optioning up a power pack with a deep-cycle battery, 240V charger, Anderson plug, internal LED lights and some 240/12V plugs is all that's needed to create a capable offroad family camper, prepared to explore.